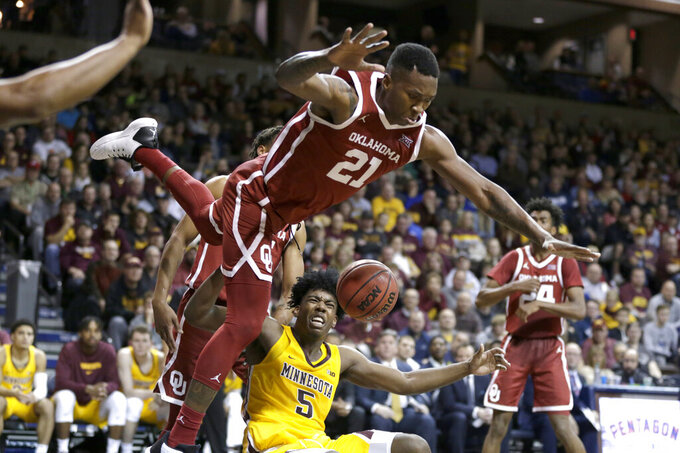 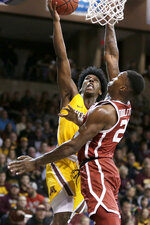 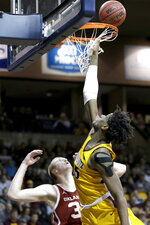 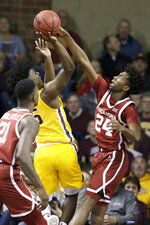 SIOUX FALLS, S.D. (AP) — Minnesota and Oklahoma may have played at a neutral site at the Sanford Pentagon on Saturday night, but it felt like a home game for the Gophers. Sioux Falls, South Dakota is just 15 miles from the Minnesota border, but Oklahoma was able to quiet the predominantly Minnesota crowd for a 71-62 win.

Jamal Bieniemy had 15 points off the bench on 5-of-8 shooting for Oklahoma, which used a 23-4 second half run to erase an eight-point deficit midway through the half. Austin Reaves added 11 points and Kristian Doolittle had 10 points and 10 rebounds.

Alondes Williams scored a traditional 3-point play with eight minutes remaining to give the Sooners their first lead since 24-23 late in the first half.

Oklahoma overcame a slow start from the field and finished shooting 40 percent for the game. They shot just 23 percent from the field in the opening half before going 16 for 26 in the second.

The Gophers built an eight-point lead in the second half when Willis scored to make it 51-43 with just over 12 minutes to play. But the Sooners didn't fade and went on their big run to take the lead. While Oklahoma was making it look easy during the run, Minnesota managed just four baskets in the final 12 minutes of the game.

"We came out of that under 12 (minute) timeout, our guys toughened up a little bit defensively. We got some stops, and I think that boosted our confidence," Oklahoma coach Lon Kruger said. "They got a little more physical and got into the ball, just energy wise, which you have to be when you're down eight points."

The first half went back-and-forth before Minnesota built the biggest lead of the half and led 32-26 at the break. Willis hit a 3-pointer with 22 seconds to play and Carr scored at the buzzer to give the Gophers the edge.

Oklahoma managed to come back and win in what was virtually a home game for the Gophers. The Sooners got scoring from eight different players.

Minnesota's perimeter offense looks to be a real threat after another impressive performance from beyond the 3-point line. The Gophers hit eight 3-pointers against Oklahoma and had 13 in their opener against Cleveland State. Minnesota averaged just five made 3-pointers per game last season.

Bieniemy scored 13 of 15 points in the second half. The Sooners' bench was 7 of 11 from the field and scored 19 points. Meanwhile, Minnesota didn't get much from its bench, which shot just 1 for 5 from the field.

"I thought we had some opportunities at the rim that we didn't quite finish. We had some weak layups that got blocked, and those are all things we'll learn from. In an early-season game like this, a lot of learning opportunities come out of it," Kruger said.

Minnesota continues is current three-game road trip and will be at Butler on Tuesday and at Utah on Friday. It's the first time the Gophers have faced three high-major teams in their first four games since 1969.

Oklahoma heads to Oregon State on Tuesday before hosting William & Mary for its home opener on Nov. 18. The Sooners play only two home games in a 45-day stretch between Nov. 6 through Dec. 20.