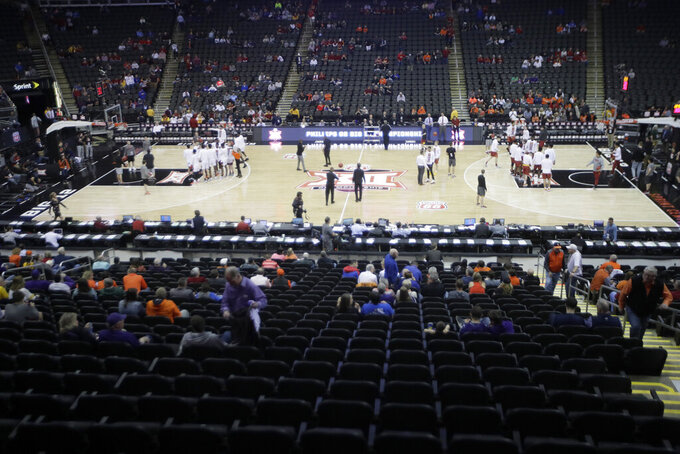 Fans watch Oklahoma State and Iowa State warm up before an NCAA college basketball game in the first round of the Big 12 men's basketball tournament in Kansas City, Kan., Wednesday, March 11, 2020. Fans will not be able to attend the tournament starting with the quarterfinal round. (AP Photo/Orlin Wagner)

KANSAS CITY, Mo. (AP) — Oklahoma State's Isaak Likekele silenced an arena full of Iowa State fans by going coast-to-coast for the go-ahead lay-up with 3.8 seconds left, lifting his eighth-seeded Cowboys to a 72-71 victory over the No. 9 seed Cyclones in the first round of the Big 12 Tournament on Wednesday night.

Likekele and the rest of his teammates had better get used to the silence.

The Cowboys (18-14) advanced to play top-ranked Kansas in the quarterfinals on Thursday, a game that will be played — like just about every conference tournament game — without any fans at the Sprint Center. The league made that decision about 30 minutes before the tournament began, and with fans already streaming through the doors for the opener.

“I think we'll be fine,” Likekele said. “We'll create our own energy.”

Likekele sure had energy to spare when it mattered Wednesday night.

He finished with 21 points for the Cowboys, who trailed almost the entire second half before taking the lead on his two free throws with 20.4 seconds left. The Cyclones (12-20) regained the lead when Terrence Lewis blew past the Oklahoma State defense for a layup with 8.9 seconds left, only to see Likekele race back the other way for his go-ahead bucket.

“A lot of times the other team is really excited and you can catch them off balance in that situation, so whoever gets the ball, inbound it and get up court as fast as you can,” Oklahoma State coach Mike Boynton said. “He did a great job reading the scenario and he made a great play.”

The Cyclones had one last chance when they inbounded the ball with a couple ticks left on the clock, but Lewis never managed to get a tightly guarded shot up before the buzzer sounded to end the game.

Likekele also had nine assists and five rebounds for the Cowboys, who have won four straight to climb into the NCAA Tournament conversation. Cameron McGriff added 17 points and Yor Anei finished with 12.

“Thought we really competed, put ourselves in position to win the game. They just made one more play at the end,” Iowa State coach Steve Prohm said. “We weren't able to get back in transition and they were able to get to the basket.”

Despite warnings about the tournament potentially going on without fans, due to the outbreak of the coronavirus, the Cyclones still brought thousands to Kansas City. But for most of the first half, a team that has struggled to generate much momentum gave them little to cheer about, and Oklahoma State took a 34-32 lead into the locker room.

Iowa State finally found its stride early in the second half.

Beginning with a 3-pointer from Caleb Grill, the Cyclones embarked on a 15-2 run that forced Boynton to call timeout. Nixon had the final seven points during the charge, which brought injured star Tyrese Haliburton to his feet on the Iowa State bench and gave his team a 47-38 lead with just under 16 minutes to go.

The Cowboys slowly whittled away at their deficit throughout the second half, and a series of foul shots got them within 67-66 with 1:37 to go. Nixon answered with a step-back jumper for Iowa State, and McGriff followed with a pair of foul shots, as the two teams went toe-to-toe down the stretch of the Big 12 Tournament opener.

Oklahoma State was the team left standing at the end.

“You know, it's what we came here to do. We came here on a business trip," McGriff said. ”We understood it was practically going to be a road game with their fans here and we stayed composed the whole game. We showed our resiliency to fight back."

The decision to restrict fans — along with pep bands, cheerleaders and dance teams — was voted upon unanimously by the Big 12's board of directors. They received input from a number of entities, including public health officials, The University of Kansas Hospital, the Centers for Disease Control and the Kansas City Sports Commission.

“The attempt is to minimize the number of people here but still find a way to conduct the event," Big 12 commissioner Bob Bowlsby said. “These are unusual times and we've taken the steps that we think are appropriate.”

Iowa State is headed into a rebuilding offseason after having won 12 of their last 14 games at the Big 12 Tournament coming into the weekend. The Cyclones had won tournament titles in 2016, '17 and last season.

Oklahoma State could really give its Big 12 hopes a boost by beating the Jayhawks, though the Cowboys weren't very competitive in getting swept by the nation's top-ranked team during the regular season.

Iowa State's season is over.

Oklahoma State advanced to play the No. 1 Jayhawks in the quarterfinals.