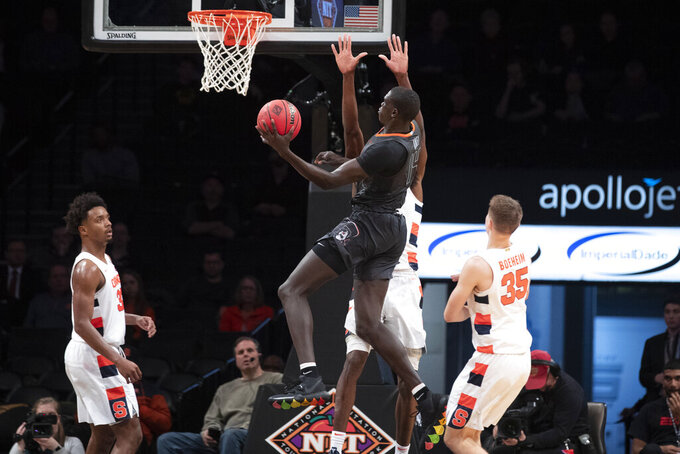 “I don’t think we played our best game,” Boynton said after the Cowboys’ 86-72 win over Syracuse in the second game of the NIT Season Tip-Off at Barclays Center.

“I thought we played aggressively, and I thought we competed really hard for 40 minutes,” Boynton said.

Oklahoma State (6-0) will meet Mississippi in the championship game Friday night, which will follow Syracuse’s (4-2) date with Penn State in the consolation.

Isaac Likekele scored a career-high 26 points to lead the Cowboys. "He was terrific," Boynton said of Likekele. "That kid has grown a lot."

Whereas Boynton was talking about his point guard's maturity, Syracuse coach Jim Boeheim is coming to terms with a young starting backcourt.

"I thought just the difference between their veterans (and Syracuse's underclassmen)," Boeheim said about Oklahoma State's effectiveness. "(We) have two young guards (who) are trying to figure out what they're doing out there."

Any thoughts of a comeback were dashed as the Cowboys scored 15 of the next 19 points to extend their lead to 73-52.

"I feel like we stayed offensively aggressive," Likekele said. "That's what we did, attacking the paint as much as we could."

As Oklahoma State stretched the lead, the Orange did not make a shot from the field in more than four minutes. Bourama Sidibe snapped the cold spell with a layup, but by that point Syracuse was down 75-58 with about six minutes left.

Anei’s one-handed slam with 2:21 left was for all intents and purposes, the culmination of a strong performance on Oklahoma State’s part.

The first half saw both teams trade runs. The Cowboys opened the game with an 11-0 run only for Syracuse to respond with a 23-5 surge over a span of 9:34. But Oklahoma State ended the half by outscoring the Orange 27-8.

"The 3s at the end of the first half gave them separation," Boeheim said. "We were just fighting to try to get back into it in the second half."

This was a matchup between teams that can shut down opponents.

Oklahoma State: The Cowboys entered the game ranked 36th in the nation in 3-point percentage allowed (36%) and 25th in defensive 3-point field goal percentage (25.7%). They lived up to their reputation, holding Syracuse to 25.8% shooting from 3, and scored their 55th point of the game just 4:27 into the second half.

Syracuse: The Orange entered ranked 10th in the nation in scoring defense, yielding just 53.6 points per game. The 86 points allowed against the Cowboys was a season high, surpassing its previous high of 67 in a 22-point win over Seattle on Nov. 16.

Oklahoma State: Plays in the championship game on Friday night against Mississippi, which rallied late to beat Penn State.

Syracuse: Faces Penn State in the consolation game on Friday.