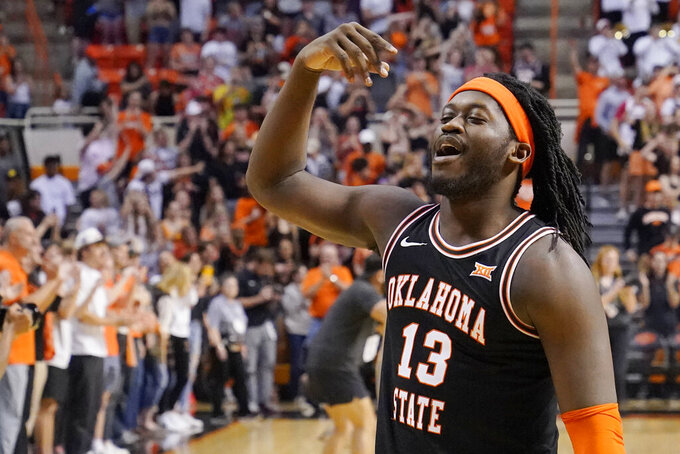 STILLWATER, Okla. (AP) — Oklahoma State salvaged a special ending from what could have been a throwaway season.

Bryce Thompson made a go-ahead 3-pointer with 19.4 seconds left and Oklahoma State beat No. 12 Texas Tech 52-51 on Saturday, eliminating the Red Raiders from the Big 12 title race.

Terrence Shannon missed a jumper closely contested by Oklahoma State's Tyreek Smith just before the buzzer, and the Cowboys (15-15, 8-10) celebrated a win in their season finale. The NCAA banned Oklahoma State from postseason play because of rules violations.

“I feel like we kind of maximized what we could do,” Thompson said. “That’s a great team we just played. To go out and win in that fashion, to keep fighting and to finish it off for our seniors was big.”

“We just couldn’t score," Tech coach Mark Adams said. "I apologized to the team. I couldn’t get them in anything that seemed to work.”

Kevin Obanor led Texas Tech with 16 points and 10 rebounds, and Bryson Williams added 13 points before fouling out in the final minute. Williams — Tech's leading scorer for the season — wasn't in for the final sequence.

Rondel Walker led the Cowboys with 12 points, and Thompson had 11.

Obanor's reverse layup with 15 seconds left before halftime put Texas Tech up 27-25. Thompson's jumper with four seconds remaning tied it at 27. Neither team led by more than six in the first half. The game was tied six times and there were three lead changes.

A 3-pointer by Obanor put the Red Raiders up by 10 midway through the second half.

Oklahoma State roared back. A block by Moussa Cisse led to a fast-break dunk by Thompson that cut Tech's lead to 49-46.

The Cowboys missed their next seven shots, with Tech stuck on 49 points before Walker scored and was fouled on a putback with 51.5 seconds left. He made the free throw to tie it at 49.

Tech missed 10 straight shots before a tip-in by Davion Warren with 28.3 seconds remaining put the Red Raiders back in front, setting up the wild finish.

The performance left the Cowboys wondering what they might have achieved this season with a postseason bid at stake.

“Defensively, I think we are the best team in this league,” Oklahoma State guard Isaac Likekele said. “And then offensively, whenever we are focused and move into the right headspace and execute, it looks like beautiful basketball.”

Texas Tech: The Red Raiders went unbeaten at home but struggled elsewhere. They went 3-6 on the road and 5-8 away from home. That's not a good sign heading into postseason play.

Oklahoma State: The Cowboys closed the season by winning four of their final seven games, despite the postseason ban. They beat the Red Raiders, despite shooting just 32.8%.

Likekele has a year of eligibility remaining. The 6-foot-5 guard has scored more than 1,000 points at Oklahoma State and has been a defensive anchor.

He's not sure if he will return next year, or when he will make a decision.

“Honestly, I don't know,” he said. "It could be two days or it could be two months. Right now I’m just trying to relax and see my family and just chill with my teammates. So I’ll deal with all that stuff when the time will come.”

Cisse — a 7-foot forward — scored four points for Oklahoma State, but he had 10 rebounds and five blocks.

He also guarded the inbound pass on the final play. His presence led to a difficult shot for Tech.

“Yeah, we were just kind of suffocating,” Thompson said. "I mean, we had put Moussa on the ball, so it was really hard for them to get it in and ... Just trying try to be solid, not foul and make them take a tough shot. And luckily, we were able to make them do that.”

Texas Tech: Will be the No. 3 seed in the Big 12 tournament.