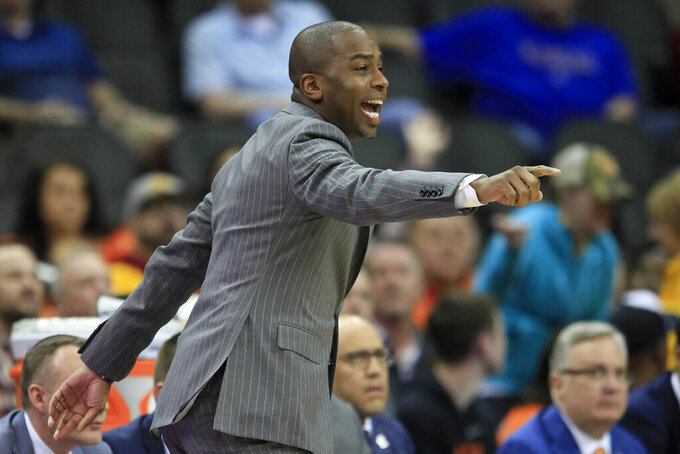 Oklahoma State head coach Mike Boynton directs his team during the first half of an NCAA college basketball game against Iowa State in the first round of the Big 12 men's basketball tournament in Kansas City, Kan., Wednesday, March 11, 2020. (AP Photo/Orlin Wagner)

Boynton compared Cunningham's possible impact to that of Oklahoma’s Trae Young during the 2017-18 season. As a freshman, Young led the nation in scoring and assists and lifted a team that struggled the previous season to the NCAA Tournament. Cunningham’s talent will be the primary reason expectations will be higher for the 38-year-old Boynton, who will enter his fourth season having yet to reach the NCAA Tournament.

“His talent level will help us elevate our ceiling -- what this team’s capable of doing,” Boynton said of Cunningham, a 6-foot-7 point guard. “He makes other people better. He makes other people’s jobs easier any team, at any level -- you need a guy like that.”

Cunningham isn’t the only elite player Oklahoma State has added. On Wednesday, the Cowboys signed Donovan Williams — Mr. Basketball in Nebraska — and Canadian star Matthew-Alexander Moncrieffe, who has international experience. Boynton said Moncrieffe would be a top-20 prospect in the United States.

They will join a program that appears to be on the upswing. Oklahoma State went 12-20 two seasons ago under Boynton, then got off to an 0-8 start in Big 12 play this past season before closing by winning seven of their final 10 regular-season games and defeating Iowa State in the first round of the Big 12 tournament.

Several players from the last recruiting class showed promise during conference play. Forward Kalib Boone, in particular, had some strong games down the stretch, scoring 16 points in a win over Texas Tech and 14 in a victory over Oklahoma.

“You talk about character and work ethic and understanding of being resilient -- they’re going to be missed a lot,” Boynton said. “I’ve already had conversations with our returners about their responsibilities now in that regard.”