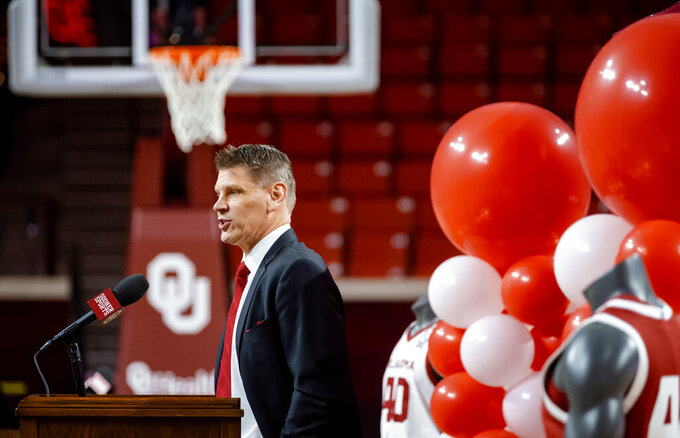 NORMAN, Okla. (AP) — New Oklahoma coach Porter Moser isn’t intimidated by the impressive track records of the coaches he'll face in the Big 12 as he steps in for the retired Lon Kruger.

Scott Drew just led Baylor to a national title. Kansas’ Bill Self, who just signed a lifetime contract, has a national championship and has been to three Final Fours. Just two years ago, Texas coach Chris Beard led Texas Tech to the championship game. Bob Huggins took West Virginia to the national semifinals in 2010 — his second time taking a team to the Final Four. Kansas State coach Bruce Weber led Illinois to the national title game in 2005.

Moser quickly pointed out that he, too, has been to the Final Four — he took Loyola Chicago to the national semifinals in 2018 as a mid-major.

“I look forward to it because I’ve been on that stage, too,” Moser said Wednesday in his first news conference since taking the job. “And I’m not going to take a back seat. I think there’s some of the best coaches in the country in this league, top to bottom.”

There are other challengers, too. Oklahoma State coach Mike Boynton has stockpiled talent in Stillwater, and his Cowboys were the most recent team to beat Baylor. Iowa State was down this year, but the Cyclones won Big 12 tournament titles in 2017 and 2019. Texas Tech’s Mark Adams was an assistant for Beard who expects to keep that program going. TCU has pulled numerous upsets under coach Jamie Dixon the past few years, including two wins over Oklahoma State this past season.

“No question about the established programs, as we just saw one win a national championship," Moser said. "But that’s the fun. That’s what’s drawn me to be here. To play at the highest level and win the right way. I can’t say more of a mission statement than that.”

If nothing else, he’ll look the part. Athletic director Joe Castiglione presented Moser with a pair of crimson Jordan 4s as part of the introduction.

Moser won’t have one of his key influences. When it was mentioned that he’d be without Sister Jean Dolores Schmidt — the 101-year-old team chaplain who became a celebrity during Loyola Chicago's Final Four run — Moser quipped that she is entering the transfer portal, drawing laughter from the small, socially distanced crowd at the Lloyd Noble Center.

Before Moser worries about other teams, he’ll have to deal with internal changes. Austin Reaves and De’Vion Harmon — Oklahoma’s top two scorers this past season — have announced their intentions to enter the NBA draft pool. Brady Manek has entered the transfer portal as a graduate, forward Victor Iwuakor is leaving the Sooners to play for UNLV, guard Trey Phipps is headed to Oral Roberts and backup center Kur Kuath has announced his intentions to go pro.

That leaves Moser with plenty of work to do.