Ole Miss seeking to build on its surprising 2018-19 success 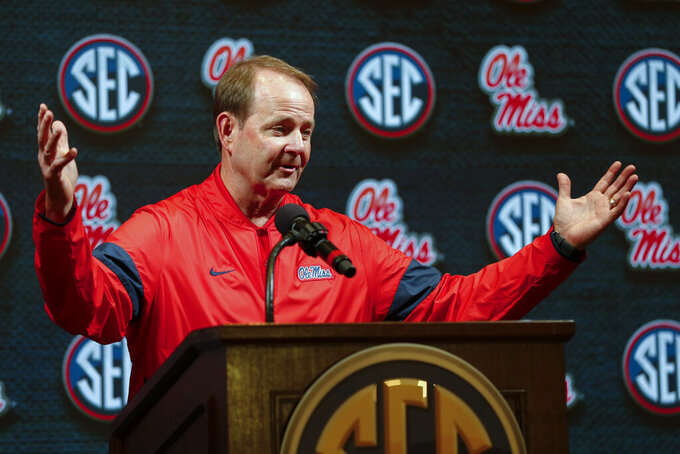 "I like where our team is," Ole Miss coach Kermit Davis said. "Compared to last year's team, I was very proud of that team, we're deeper more athletic. We look more like an SEC team."

Davis wants Ole Miss to take another step forward after the Rebels went 20-13 and reached the NCAA Tournament in his debut season. That 2018-19 team tied for sixth place in the SEC after being picked to finish last in the league.

This year, the SEC's preseason media poll has Ole Miss finishing eighth out of 14 teams.

The biggest loss the program suffered is the production of Terence Davis, who averaged 15.6 points per game and led the team in both rebounds and assists. Davis signed a two-year deal with the Toronto Raptors.

Now that Davis has departed, the bulk of the scoring load will be shouldered by a backcourt combination of senior Breein Tyree and junior Devontae Shuler.

Tyree averaged 17.9 points last season to rank third in the SEC. He earned second-team Associated Press all-SEC honors and was a first-team all-SEC selection of the league's coaches.

Shuler, who made the move from wing to point guard last year, was perhaps the most invaluable cog on the roster because of the position shift and his on-ball defending prowess. He averaged 10.3 points per game and tallied 56 steals. Tyree's bump in scoring can be in part attributed to Shuler taking over at point guard, allowing Tyree to play more off the ball.

Ole Miss will likely be a guard-oriented team again this season. The Rebels hope they are deeper and better equipped in the post, a weak point last year.

Some other things to watch during Mississippi's 2019-20 season:

The crux of Ole Miss' roster overhaul resided in the frontcourt.

Ole Miss also has sophomores Blake Hinson and K.J. Buffen as well as redshirt freshman Carlos Curry. The Rebels should have more options to defend the paint and rebound better than they did last season.

Buffen and Hinson, who both stand at 6-foot-7 and roughly 225 pounds, played a lot of minutes on a thin team last year. Both added weight this offseason and are expected to contribute more. Buffen improved his jump shot and Hinson has emerged as a leader.

Hinson was diagnosed with a blood irregularity in August, but Davis hopes to have him back by the start of the season.

Sophomore Luis Rodriguez is a prime candidate to be the Rebels' breakout player, according to Davis. Rodriguez played sparingly as a freshman but earned the trust of the coaching staff. At 6-6, 200 pounds, he's a versatile wing who could provide a rebounding boost.

"If we started today, he would start," Davis said. "He's physical and when the ball goes up, he's a natural instinctive rebounder."

Sy and Bryce Williams are the two junior college newcomers on the roster. Both are expected to make an immediate impact.

Sy, a 6-10 power forward, was the centerpiece of the 2019 recruiting class and has a good chance to start immediately. Williams aims to crack the rotation in a veteran backcourt.

Ole Miss has a couple of notable non-conference matchups in the first month of the season, including a Nov. 23 game at No. 14 Memphis just before NIT Season Tipoff against Penn State, and potentially Syracuse or Oklahoma State in Brooklyn, New York. The Rebels host Butler on Dec. 23 and visit Wichita State on Jan. 4.

The Rebels open the season Nov. 8 by hosting Arkansas State.