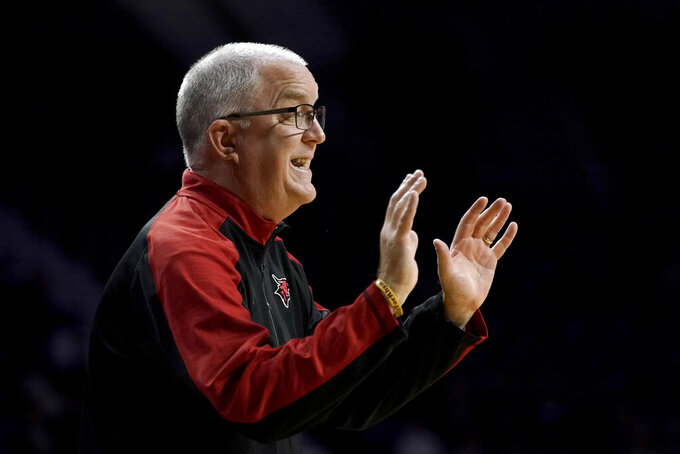 FILE - Omaha head coach Derrin Hansen talks to his players during the first half of an NCAA college basketball game against Kansas State, Wednesday, Nov. 17, 2021, in Manhattan, Kan. On Sunday, March 6, 2022, Hansen, who coached Omaha during its transition from Division II to Division I, was fired after a second straight five-win season. (AP Photo/Charlie Riedel, File)

OMAHA, Neb. (AP) — Derrin Hansen, who coached Omaha during its transition from Division II to Division I, was fired Sunday after a second straight five-win season.

The Mavericks were 5-25 overall and 4-14 in Summit League play this season. They lost 87-79 to South Dakota State on Saturday in the first round of the conference tournament.

“I ask that the entire Maverick community join me in thanking Coach Hansen for his many contributions to Omaha Athletics and our university," athletic director Adrian Dowell said. “In 17 years leading Omaha Men’s Basketball, Coach Hansen represented UNO with class, impacted countless lives through his mentorship of student-athletes on and off the court, and successfully transitioned the program to the Division I level.”

“After a careful assessment of the program, I am confident that under new leadership, Omaha Basketball can achieve sustainable success at the top of our league, and we are committed to elevating the program’s stature," Dowell said.