One $hining Moment: Players can cash in on NCAA success 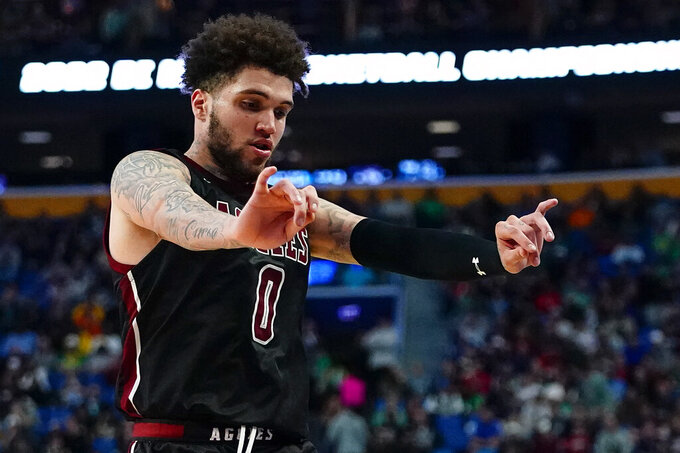 New Mexico State guard Teddy Allen reacts during the second half of the team's college basketball game against Connecticut in the first round of the NCAA men's tournament Thursday, March 17, 2022, in Buffalo, N.Y. (AP Photo/Frank Franklin II)

The NCAA lifted its ban last summer on athletes earning money off their name, image and likeness. Since then, all kinds of business opportunities have sprung up from modest online endorsement deals to national sponsorship campaigns to booster-funded collectives that can pay athletes thousands of dollars.

The NCAA Tournament is a chance for new stars to emerge, such as New Mexico State's Teddy Allen.

Allen scored 37 points in an upset over UConn on Thursday, flexing, dancing and waving goodbye to the Huskies fans.

By Friday night, there were T-shirts and hooded sweatshirts available for purchase online with a graphic of Allen, the words “BYE BYE” and the score and date of the Aggies' first NCAA Tournament victory since 1993.

And by late Saturday night, Teddy Buckets and the Aggies were done, eliminated by Arkansas 53-48, with Allen held to 12 points.

“Everyone understands how crucial it is to really capitalize on the moment in the moment. As this is happening. As it's the talk of the town. As it's trending on Twitter. That’s the time to really make a strong post,” said Hunter Pomerantz, co-founder of The Players Trunk, an online merchandise store for college athletes to sell their gear and memorabilia.

Pomerantz, a former student-manager for the Syracuse basketball team, said The Players Trunk reaches out to athletes and offers them a contract to make a cut of the sales of the apparel. He declined to say what percentage goes to the players.

The shirts sell for $29.99 and the sweatshirts go for between $49.99 and $59.99. Pomerantz said the contract covers only sales of the gear and all they ask of the athletes is to promote the merchandise on their social media accounts.

Even before the tournament began, The Players Trunk started making money on March Madness.

The company produced shirts and hoodies for Wisconsin guard Chucky Hepburn, whose bank shot in the final seconds against Purdue sealed the Big Ten regular-season title for the Badgers, and Chattanooga's David Jean-Baptiste, who sent the Mocs to the NCAA Tournament with a long buzzer-beater in the Southern Conference championship game.

Selling merch is just the tip of the earning potential for March's shooting stars.

Jim Cavale, CEO of INFLCR, a company that works with thousands of college teams and athletes on a range of NIL programs, said there is a potentially lucrative market for March Madness related NFTs and digital collectibles.

But that takes planning and coordination and the current state of the NIL market is not set up to allow athletes to efficiently take advantage.

The NCAA does not have uniformed, detailed rules governing NIL compensation. The association has instructed its member schools to follow state laws where applicable or to create their own rules in states without legislation.

Many athletes are not permitted to use their schools' marks and logos in their NIL activities. In some cases, they can't work on NIL deals while representing the school.

The Players Trunk gear with Allen's image makes no reference to New Mexico State, but it does use the colors of the Aggies basketball uniforms.

Also, licensing agreements between the NCAA and media rights holders CBS Sports and Turner put restrictions on what athletes can use to create content.

Even if the content can clear legal hurdles, it takes quick work and insight to capitalize on newfound fame.

This first March Madness with NIL is likely to set a blueprint for schools and athletes to better position themselves for sudden stardom in years to come.

“This will be the last year that kids aren’t fully ready for it," Blake Lawrence, the CEO of Opendorse, another company that works with schools and athletes to manage NIL activities.

Lawrence said the muddled nature of current NIL rules and regulations is holding back the market.

He said a national brand wanted to do advertising around both the men's and women's tournaments using athletes whose teams advanced from the first round to the second round.

So a player such as Allen could have appeared in an ad on Saturday after his big game on Thursday. But there were questions about whether athletes would be permitted to engage in NIL activities while on road trips, representing their schools.

“Once they started to navigate this stuff they decided it's too hard and so they decided not to spend with student-athletes at all,” he said.

For now, T-shirts and hoodies will have to do.