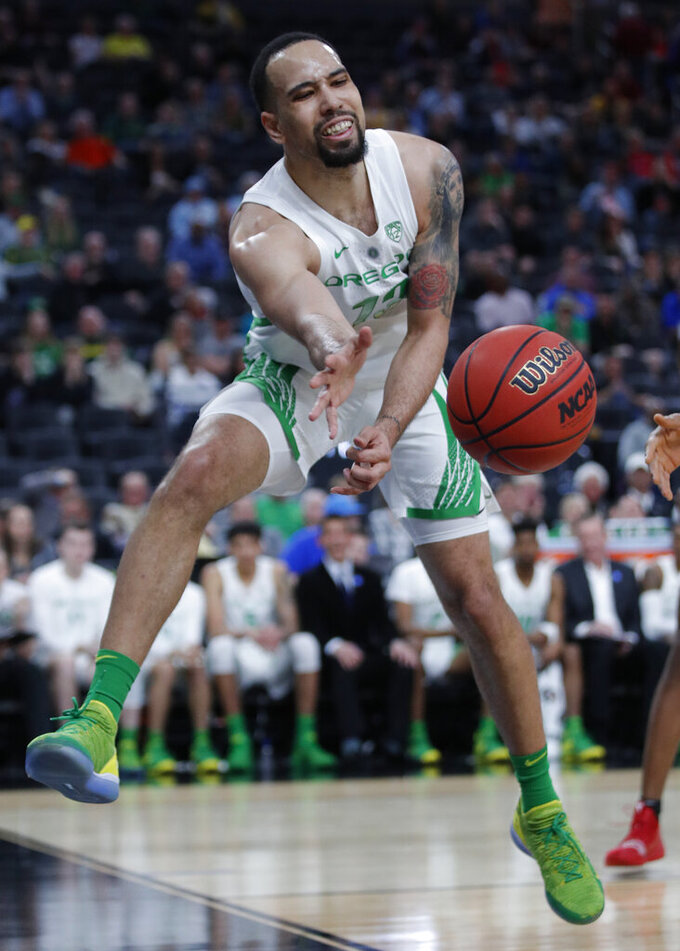 Oregon's Paul White keeps the ball in play during the first half of the team's NCAA college basketball game against Washington State in the first round of the Pac-12 men's tournament Wednesday, March 13, 2019, in Las Vegas. (AP Photo/John Locher)

LAS VEGAS (AP) — Oregon knows its only real NCAA Tournament shot is to win four games in four days at the Pac-12 tournament.

The way the Ducks are playing defense, they might just do it.

"Our guys have made a big leap," Oregon coach Dana Altman said. "We're so much more connected. Our communication is so much better. It's a big, big difference where we were just three or four weeks ago."

The sixth-seeded Ducks (20-12) jumped on the Cougars from the start, racing out to a 15-point lead in the opening 12 minutes. Oregon shot 49 percent from the floor and had 14 steals to earn a spot in Thursday's quarterfinals against No. 3 seed Utah.

The tournament's largest margin of victory had been 32, accomplished twice.

The 11th-seeded Cougars also had 20 turnovers that led to 26 Oregon points in their ninth straight one-and-done trip to the Pac-12 tournament.

Washington State had no players score in double figures.

"I thought Oregon was just exceptional," Cougars coach Ernie Kent said. "People have talked about them being the hottest team in the league. Their length on the floor is really difficult to score on, as they've shown the last five opponents they've played."

Oregon and Washington State were in the same position a year ago, both with the same seedings and Utah up next. Oregon won 64-62 in overtime.

The Ducks closed the regular season with four straight wins, including their second double-digit win over the Cougars.

Oregon's late-season run coincided with a lineup change, with four players 6-foot-9 starting alongside Payton Pritchard. The big lineup helped the Ducks hold four straight opponents to 62 points or less, a program first in the shot-clock era (since 1985-86).

The Ducks swarmed the Cougars into turnovers and missed shots, starting the game with an 18-3 run.

"We did a good job of rotating, communicating with one another," Oregon's Paul White said. "I think that's been a key factor to the success of our defense so far."

Oregon didn't let up, pushing the lead to 29 in the first six minutes of the second half.

"With turnovers and them getting out in the open court, it was tough for us to find rhythm anytime during the game," Washington State's Robert Franks said.

The Cougars were no match for Oregon's length and athleticism, and didn't help themselves by being careless with the ball.

The Ducks are on a defensive roll as they try to earn the Pac-12's automatic NCAA Tournament bid.

Washington State's season is over.

Oregon faces Utah in a rematch of last year's quarterfinals.