Oregon overcomes setbacks to earn No. 1 seed in Pac-12 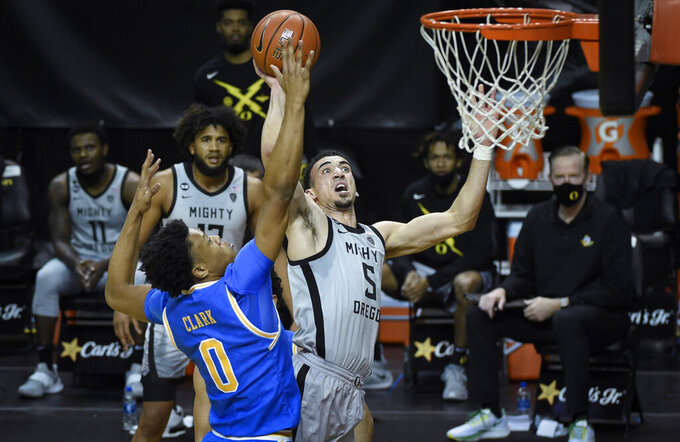 Oregon guard Chris Duarte (5) is fouled by UCLA guard Jaylen Clark (0) as he drives to the basket during the second half of an NCAA college basketball game Wednesday, March 3, 2021, in Eugene, Ore. (AP Photo/Andy Nelson)

LAS VEGAS (AP) — Oregon had to battle through two COVID-19 pauses, injuries to two of its best players and a long stretch of inactivity.

Once the Ducks got rolling, it was tough for any team to stop them.

Oregon closed a difficult season with a flourish, winning its final five games to earn a second straight Pac-12 regular-season championship. The Ducks now head to T-Mobile Arena in Las Vegas as the No. 1 seed in the Pac-12 Tournament.

“You know the guys have been through a lot, but they really came together,” Oregon coach Dana Altman said.

Oregon was picked to finish third in the Pac-12 and got the season off to a solid start, winning eight of its first nine games despite playing without point guard Will Richardson due to thumb surgery.

The COVID-19 issues hit not long after that and the Ducks played one game in a span of three weeks, a loss to rival Oregon State. Richardson returned against Washington State on Feb. 3, but leading scorer Chris Duarte went down with an ankle injury and missed two games.

The Ducks beat Washington without Duarte and went on a run when he returned, winning 10 of their final 11 games. An 80-67 win over Oregon State on Sunday put them a half-game ahead of Southern California to win the Pac-12 title.

“This isn’t the only goal we had; this is part of the journey,” forward Eugene Omoruyi said. “We have our next goal now. Just keep cranking out goals, one at a time.”

Oregon will face the winner of the game between Washington State and Arizona State in the Pac-12 quarterfinals on Thursday.

Arizona will not be in Las Vegas.

The Wildcats self-imposed a postseason ban as the program awaits word on possible NCAA sanctions. Arizona was sent a notice of allegations by the NCAA last fall and asked for the case to go through the Independent Accountability Resolution Process.

The case is ongoing and the Wildcats finished 17-9.

With Arizona out of the bracket, the Pac-12 Tournament was left with 11 teams, so the conference adjusted the format.

Instead of the top four teams getting a first-round bye, the top five will this year, with the Nos. 4 and 5 seeds facing each other in the quarterfinals.

That did not sit well with UCLA coach Mick Cronin, whose team will face Oregon State instead of the Washington State-Arizona State winner.

Oregon State may have been the Pac-12's most surprising team.

The Beavers were expected to be in rebuilding mode and were picked to finish last in the preseason poll. Oregon State exceeded those projections, finishing 14-12 overall and 10-10 in conference to end up sixth in the regular-season standings.

The Beavers have one of the conference's best players in Ethan Thompson and could be a tough out in the Pac-12 Tournament.

The other big surprise during the regular season was the inconsistency of Arizona State.

The Sun Devils were projected to contend for the conference title with the return of Remy Martin and Alonzo Verge complemented by one of the best recruiting classes in program history.

Arizona State never really got on track, plagued by COVID-19 issues and injuries. Coach Bobby Hurley did not have his entire roster for a single game in 2020-21 and the Sun Devils finished ninth in the Pac-12 at 7-10.

Second-leading scorer Josh Christopher missed the final seven games of the regular season with a back injury and fellow freshman Marcus Bagley was in and out of the lineup due to injuries.

This year's Pac-12 Tournament could be the only one for USC freshman Evan Mobley.

The 7-foot forward has been projected to be one of the top picks in the next NBA draft and has been dominant at times during what's expected to be his lone season with the Trojans.

Mobley was a unanimous selection as The Associated Press' Pac-12 newcomer of the year after averaging 16.1 points per game and leading the Pac-12 with 8.4 rebounds. He also led the conference with 2.8 blocked shots per game and was third in shooting percentage at 58%.