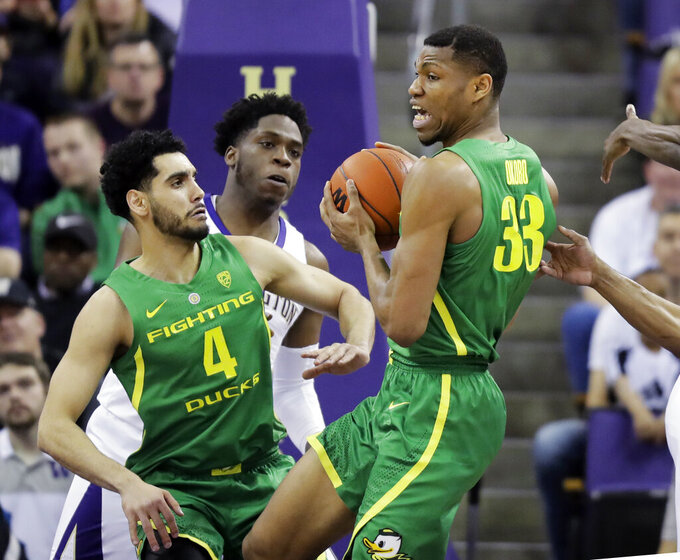 SEATTLE (AP) — Dana Altman wishes Oregon's surge, led by the Ducks defense, would have shown up a little bit sooner during conference season.

It still may have arrived in time for Oregon to be a team no one wants to face during the Pac-12 tournament next week in Las Vegas.

"I wish we would have done it a little earlier, but the guys have really connected defensively, talking and flying around," Altman said.

Payton Pritchard scored 16 points, Paul White added 10 and Oregon ended Washington's chance at a perfect home record with a 55-47 win on Saturday night to close out the Pac-12 regular season.

Oregon (19-12, 10-8 Pac-12) won its final four conference games and forced Washington into a miserable night on the offensive end. Washington scored a season-low in points and lost for the first time at home after 15 straight wins, ruining senior night for the Huskies' four seniors largely responsible for the turnaround of the program.

Oregon held three of its final four conference opponents to 51 points or less, making a case the No. 6 seed will be a favorite to be a spoiler next week during the conference tournament.

"We already had our momentum. We just keep increasing," Pritchard said. "We made a change since the UCLA game. The last five games, we've played one bad half of basketball and that was the second half of UCLA. After that we've been stellar."

Oregon never trailed after Matisse Thybulle's 3-pointer in the opening minute. The Ducks led by as many as 16 in the first half, and withstood every run by the Huskies. Washington shot 21.7 percent in the first half and finished just 3 of 20 from 3-point range, matching its season low for 3s made.

"Defensively we've been a lot better. A lot better connection, not making nearly as many mistakes," Altman said.

Washington (24-7, 15-3) will still have the No. 1 seed for the conference tournament next week, but can't afford an early exit with the tenuous NCAA tournament hopes of all the Pac-12 teams.

Jaylen Nowell led Washington with 17 points and Noah Dickerson added 14 points and 16 rebounds. Francis Okoro had nine points and 10 rebounds for the Ducks. White was part of an Oregon attack that dominated the interior in the first half and for the game outscored Washington 32-26 in the paint.

"They were disruptive. They have a disruptive defense and we didn't handle it. I feel like we got some good shots and some of those shots we have been making all year and tonight we didn't make them," Washington coach Mike Hopkins said.

Washington was within 37-34 after Nahziah Carter's 3-point play, which also drew a fourth foul on White. But the Ducks scored six straight points, on back-to-back 3-point plays. Miles Norris rebounded Pritchard's desperation 3 and scored while being fouled. Pritchard added a steal and layup and his 3-point play pushed Oregon's lead to 43-34 with 9:08 left.

Washington had one final spurt, pulling within 48-44 but two free throws from Pritchard and a desperation 3-pointer by King as the shot clock expired gave Oregon enough cushion.

Washington losing two of its final four conference games has raised concern the Huskies could be in a tenuous spot with the NCAA selection committee if it makes an early exit in Las Vegas.

"In my opinion they've earned the right to be in that tournament regardless of what happened tonight or what happens in Las Vegas," Hopkins said.

Oregon: The Ducks outscored Washington 20-6 on points in the paint in the first half. But Oregon will need to be better from 3-point range in the Pac-12 tournament. Oregon was 1 of 12 on 3s in the first half and 4 of 22 for the game.

Washington: After all the festivities of senior night — including former Washington star Dejounte Murray returning to see the senior class he entered school with — the Huskies scored a season-low 18 first-half points. Following Thybulle's first 3 just 34 seconds in, Washington missed 17 of its next 19 shots. ... Thybulle finished with five steals to match the Pac-12 single-season record of 110 held by Jason Kidd.

Oregon: The Ducks will be the No. 6 seed for the Pac-12 tournament and face No. 11 seed Washington State in the opening round on Wednesday.

Washington: The Huskies will face either No. 8 seed USC or No. 9 seed Arizona in the conference tournament quarterfinals on Thursday.