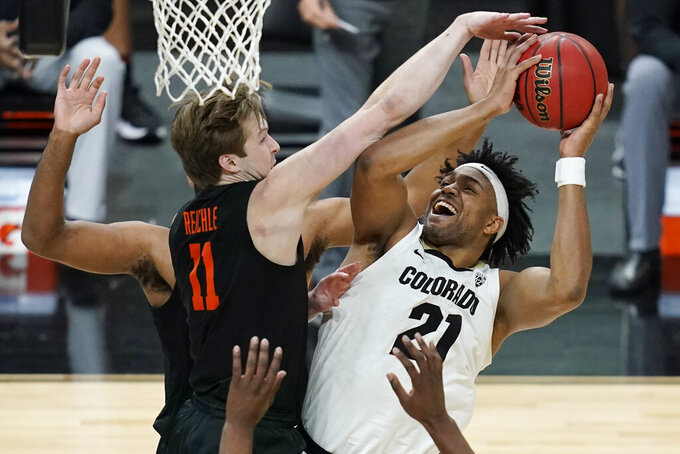 Colorado's Evan Battey (21) shoots around Oregon State's Zach Reichle (11) during the first half of an NCAA college basketball game in the championship of the Pac-12 men's tournament Saturday, March 13, 2021, in Las Vegas. (AP Photo/John Locher)

LAS VEGAS (AP) — Wayne Tinkle shuffled across toward the sideline, the streamers wrapped around his ankles creating a confetti wake. Remnants from a cut-down net dangled around his neck as the Oregon State coach heaved the game ball into the stands.

On the receiving end was his son and former player, Tres, sitting among other family members.

All those years of building, the ups and downs of a pandemic-altered season, and the Beavers were finally champions.

Picked to finish last, Oregon State is a conference champion for the first time, winning the Pac-12 Tournament title by holding off No. 23 Colorado 70-68 Saturday night.

“This has been the most emotional year in my life and probably for all of us,” Tinkle said. “It’s just incredible that we have gotten to this level and we know why we have. It's a pretty neat deal.”

Needing three wins in three days to end a four-year NCAA Tournament drought, the Beavers (17-12) built confidence with each step along The Strip.

Oregon State opened its first conference title game in 33 years with a flurry of 3-pointers and withstood a late push by Colorado (22-8) to become the first Pac-10/12 team to win the conference title after being picked to finish last.

“We have been through a lot of ups and downs as a team and we were able to overcome it,” Calloo said. “Today it shows that when we stick together we can achieve anything.”

Oregon State's gritty display put a damper on Colorado's bid for its first Pac-12 Tournament title since 2012. The Buffaloes should hear their named get called on Selection Sunday, but Pac-12 champions would have had a nicer ring to it heading to Indianapolis.

Colorado pulled within 68-66 on McKinley Wright IV's 3-pointer with 5.8 seconds left and had a chance when Oregon State's Roman Silva hit 1 of 2 free throws. Wright's halfcourt heave sailed over the backboard, sending the Beavers charging onto the floor.

“We came here to win a championship and we came up short,” Colorado coach Tad Boyle said. “They played better than we did tonight. We just weren’t good enough.”

The underdog Beavers were given little shot outside of Corvallis, overlooked, underappreciated and picked to look up at the rest of the league.

Oregon State opened the title game with a 3-point spree, hitting six of its first nine and had an early nine-point lead. A cooling trend followed, yet the Beavers still made half their shots for 33-28 halftime lead.

Oregon State kept making shots — mostly inside — and survived a six-minute stretch with Thompson on the bench to stay in front. The Beavers had some tense moments late, but can call themselves conference tournament champions for the first time.

“When you’re patient, when you stay together, when you roll with the punches, eventually this is what it leads to and we have proven that,” Tinkle said.

Colorado was picked to finish seventh in the preseason poll despite the return of Wright, one of the toughest, steadiest guards in college basketball.

Behind Wright and big man Evan Battey, Colorado finished third in the Pac-12, then had a pair of down-to-the-wire wins over California and No. 23 USC in the conference tournament.

The Buffaloes had a hard time slowing the Beavers in the title game, but also hit half their shots (13 of 26) to stay within reach at halftime.

Wright helped keep Colorado within reach down to the wire, but the Buffalos made too many mistakes down the stretch and came up one shot short.

“Collectively, probably we were playing a little uptight and we just failed on some of those turnovers and bad shots,” said Battey, who had 16 points.

Oregon State completed an unexpected run to its first conference title with confident game against one of the Pac-12's best defensive teams.

The Buffaloes kept hanging around after falling behind early and nearly pulled off the comeback.

Calloo had a breakout game when Oregon State needed it most.

The 6-foot-10 junior was a starter early in the season, but had been mostly a complementary player during the Pac-12 season.

With Thompson limited to seven points, Calloo helped push the Beavers the lead and hit 6 of 11 shots overall.

“It’s not easy when you go somewhere because you want to be a big part of it, but to his credit he never went south on us,” Tinkle said "He continued to work to try to get better every day."

Oregon State will play in the NCAA Tournament for the first time since 2016.

Colorado also should get an NCAA Tournament nod.