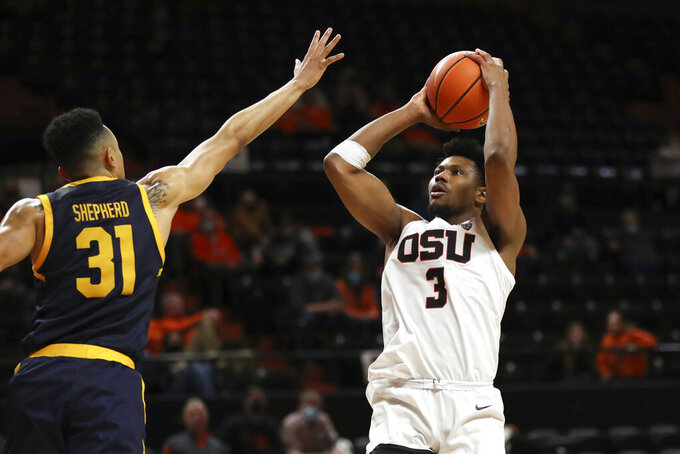 With only one win in Pac-12 play and just three wins overall last season, Oregon State is welcoming a chance for a fresh start.

The Beavers return just four players this season as coach Wayne Tinkle undertakes an ambitious makeover that emphasizes youth. Nine players on the roster are freshmen.

The top five scorers from last season are gone, including Jarod Lucas, who led the Beavers with an average of 13.5 points a game but transferred in the offseason to Nevada. Forward Warith Alatishe, who was part of the 2020-21 team that surprisingly went to the Elite Eight in the NCAA Tournament, decided to go pro.

When last season ended with a loss to rival Oregon in the Pac-12 tournament, Tinkle described the campaign as “devastating.” But he was also hopeful.

“We’ve just gotta make sure we get back to that type of culture again and learn and grow through all the tough times we had this year, and I know we’ll be stronger for it," Tinkle said at the time. "I know we will.”

And so the rebuild began.

But before the season has even started the Beavers have had a setback. Georgia transfer Christian Wright, expected to be a starter, injured his knee and is out indefinitely. Wright averaged 5.3 points and 2 assists per game last season for the Bulldogs.

Tinkle is starting his ninth season with the team. It remains to be seen if he can recapture the magic of the Elite Eight team. More realistically, it's a transition year.

“We’re going to be really young, but the experiences we had over the summer were incredible in building our chemistry and getting our culture back,” Tinkle told reporters when the Beavers opened practice.

Like many teams, the Beavers took advantage of the ability to take a foreign trip this season — for the first time since the coronavirus pandemic.

NCAA rules allow teams to go abroad for exhibitions once every four years. As a bonus, the teams get additional practices before those trips.

The Beavers went on an 11-day excursion to Italy, playing games in Milan, Florence and Rome. They went 2-1.

Oregon State has a big early challenge in No. 7 Duke. The Thanksgiving Day game in Portland is part of dual tournaments honoring Nike cofounder Phil Knight.

The Beavers' roster includes six players who hail from other countries, including Rodrigue Andela from Cameroon, Ibekwe from Canada, Chol Marial from South Sudan, Felipe Palazzo from Argentina, Rataj from Germany and Ryuny from Belarus.

The Beavers have 11 nonconference games scheduled this season, starting at home on Nov. 7 against Tulsa.

The team has a pair of Pac-12 games, at home against Washington on Dec. 1 and at USC on Dec. 4, before resuming the nonconference slate.

Oregon State will face Oregon in Eugene on New Year's Eve. The Beavs close out the Pac-12 season at home against Stanford and Cal before the Pac-12 tournament starts in Las Vegas on March 8.