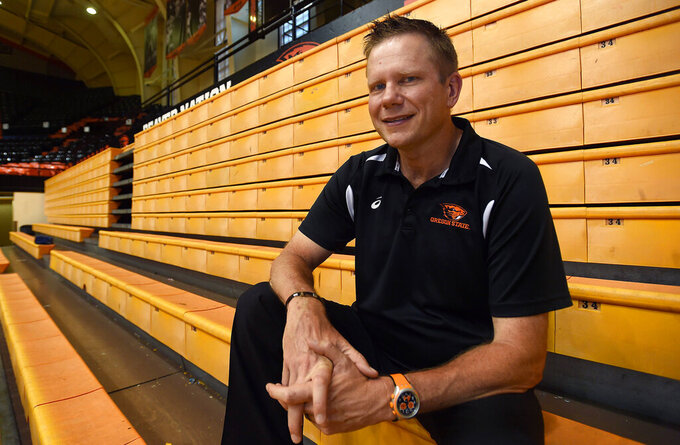 In this undated file photo, Oregon State University volleyball coach Mark Barnard poses for a photo in Corvallis, Ore. Oregon State leaders are suing to block disclosure of details about an investigation of abuse allegations in their volleyball program, even as they tout a refreshed mission for transparency in wake of their president’s resignation over the handling of sexual-misconduct cases at another school. Meanwhile, the school is pressing forward with a lawsuit to prevent disclosing details about an internal investigation of the volleyball program and its current coach, Mark Barnard, who critics say has been running an emotionally exploitative program.( Godofredo Vasquet/Albany Democrat-Herald via AP, File)

Oregon State University leaders are suing to block disclosure of details about an investigation of abuse allegations in their volleyball program, even as they tout a refreshed mission for transparency following their president’s resignation over the handling of sexual-misconduct cases at another school.

The school’s trustees accepted F. King Alexander’s resignation this week after details came to light about the way his former school, LSU, mishandled sexual-misconduct cases during his tenure.

The Associated Press sought records after its own reporting uncovered complaints from more than a dozen people close to or formerly part of current Oregon State volleyball coach Mark Barnard’s program. Three players have considered suicide during his time there.

During open meetings to discuss Alexander’s future, Oregon State’s trustees apologized to their community and promised a new push for transparency and accountability when it came to protecting students on campus.

Meanwhile, in the volleyball case, the school is pressing forward with a lawsuit against The AP to prevent disclosing details about an internal investigation of the team and Barnard, who critics say has been running an emotionally exploitative program. At least a dozen players have quit or transferred over the span of the last five years.

The coach was accused of threatening not to renew scholarships as a way of motivating players to perform better. He pitted them against each other, including asking team leaders to identify weak links on the roster in efforts to ostracize them from the team, accusers say.

The university, through spokesman Steve Clark, has disputed that a harsh environment led team members to contemplate suicide. He said Oregon State clearly communicates its scholarship offers and honors its commitments to athletes.

Clark, who did not respond to an email seeking answers for this story, said “appropriate action was taken” by athletic director Scott Barnes after an investigation conducted by the school’s Equal Opportunity and Access office, but did not elaborate.

Shortly after publishing the second part of its series last November, the AP sought information and documentation about that investigation through open-records requests. Oregon State issued a blanket denial of the initial request, and after AP won an appeal to the local district attorney’s office, the university sued the news-gathering agency in state court to prevent from having to disclose anything. A hearing in that case is set for June 25.

“This denial is just a continuation of them trying to manipulate the process from the very beginning,” said Rick Lee, a former OSU basketball player who has been critical of the administration’s handling of the volleyball case. “It warrants punitive punishment, and not just for the coach. It makes no sense that they’ll open their mouth for one individual (Alexander) but stay absolutely silent in this situation.”

Among the documents AP seeks are those related to a complaint by one player that triggered the investigation into possible violations of OSU policy with regard to bullying and retaliation against members of the volleyball team. It was completed last May and no conclusions were made public, or offered to the family of the player who made the complaint.

Across the country, LSU was facing its own reckoning over its handling of sexual-misconduct cases, most of which occurred years before trouble in Oregon State’s volleyball program erupted. The key connection between the issues was the man in charge at each campus when the problems were made public: Alexander.

He was president of LSU from 2013-19, then came to Oregon State in 2020. When Oregon State’s board of trustees was confronted with the full picture of Alexander’s responses to the crises at LSU, it opted for a soul cleansing that ended with the president’s resignation and multiple statements from the trustees vowing to do a better job.

“A lot of times thing are swept under the rug,” said Lamar Hurd, a former OSU basketball player who is now on the school’s board, as he choked back tears while speaking in an open meeting Tuesday. “I want you to know that we don’t do that here. That won’t be done.”

Hurd, who vowed Oregon State would “get it right” as it moves forward, did not respond to a message left on his cell phone by AP.

At least two parents of former Oregon State volleyball players used the public hearings about Alexander’s future to ask questions about whether the volleyball issues were being considered. One said she had asked for a meeting with Alexander to discuss the volleyball program but was turned down, told the investigation into the program was closed. The trustees did not address those issues.

Nor have they responded to two emails from the AP seeking comment for this story, the second of which was also sent to the spokesman, Clark. One of the questions was about whether the board or Alexander had approved the lawsuit against AP.

“I’m guessing there’s something in those records that they don’t want out,” said Dorina Waiters, whose daughter, Kyla, left Oregon State after a year on the volleyball team triggered depression that led to suicidal thoughts.