As others rise, No. 9 Memphis thrives without Wiseman 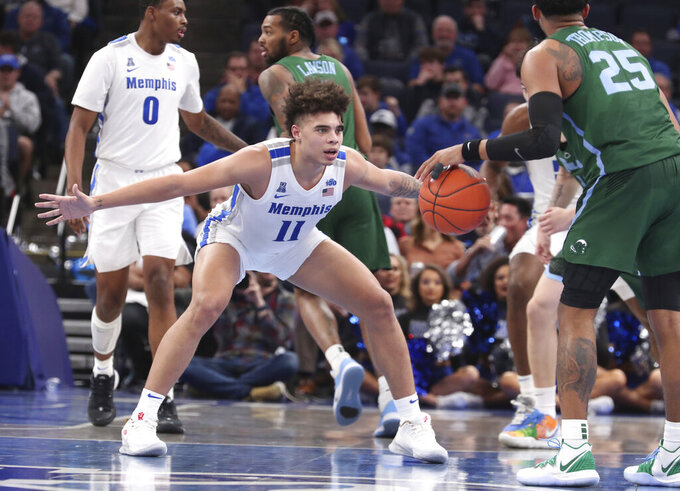 Wiseman played just three games for Memphis before leaving school to prepare for the NBA draft, where the 7-foot-1 center might be the first player selected. But the ninth-ranked Tigers are doing just fine without him so far.

Memphis (12-1) is undefeated without Wiseman and has reeled off 10 consecutive victories. The Tigers have their highest ranking since reaching the No. 8 spot in November 2011 as they chase their first NCAA Tournament berth in five years.

“We’ve just been staying together,” freshman forward D.J. Jeffries said. “We’ve been coming in and staying as a family. Losing James is hard, but he’s gone now so we’ve got to stick together, keep winning and keep doing what we’re doing, and we'll be good.''

This inexperienced roster has remained focused amid all the distractions surrounding Wiseman’s brief and tumultuous stay.

When the NCAA ruled Wiseman was likely ineligible, he played the season opener only after his lawyer obtained a temporary restraining order less than an hour before tipoff. Wiseman later was suspended 12 games because the NCAA determined Memphis coach Penny Hardaway was acting as a booster when he paid the prospect’s family $11,500 to assist in a move from Nashville to Memphis in 2017. The payment occurred before Hardaway started coaching Memphis.

Wiseman would have been eligible to return Jan. 12 at South Florida, but he instead announced Dec. 19 in an Instagram post that he had left school to begin focusing on his pro career.

“I think we’ve done a good job of kind of not making it a focal point with us,” Hardaway said. “Of course, they read it in social media and things of that nature and we were in the midst of it — we were in the storm of it — but we never really talked about it a lot. We just kind of moved on, business as usual, let’s get to work and let’s keep playing. Lucky for us, we were winning during those storms.”

Wiseman averaged 19.7 points and 10.7 rebounds in the three games he played, so his absence left a giant hole. Yet his former teammates have done a remarkable job of picking up the slack.

Achiuwa, who is 6-foot-9, has emerged as Memphis’ top remaining scorer (14.2) and rebounder (9.8). Jeffries and Quinones are consistent double-digit scorers. Sophomore guard Tyler Harris is shooting 40% from 3-point range. Another sophomore guard — Alex Lomax — has a knack for delivering game-clinching plays down the stretch.

“We have to do it by committee,” Hardaway said. “We’ve got a ton of talent on this team. We’re one of the deepest teams if not the deepest in the country as far as talent from top to bottom.’’

The Tigers still have plenty of room for improvement.

Memphis is the only team ranked 15th or higher that has more turnovers than assists. The Tigers are making just 68% of their free throws (Achiuwa is shooting not even 58% from the line and has the most free-throw attempts on the team). Hardaway says Memphis also must toughen its defense and communicate better.

Yet the fact that Memphis has all these issues and still has won 10 straight underscores its considerable potential. During a season in which top-ranked teams keep falling and nobody has separated itself from the pack, Memphis knows it has an enormous opportunity if its underclassmen keep maturing.

“A lot of people tell us how we’re young and how they feel we’re not going to do it, but we’re just coming together on and off the court, just (growing) together and becoming brothers and a family,” Quinones said. “It’s ended up being positive on the court.”