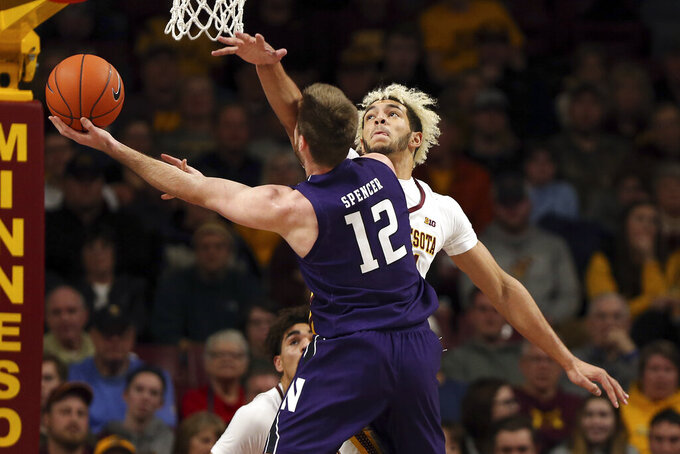 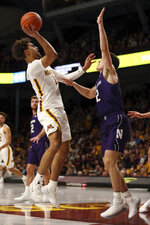 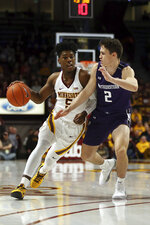 MINNEAPOLIS (AP) — Daniel Oturu had 19 points, 16 rebounds and five blocks in posting his ninth double-double of the season, leading Minnesota past Northwestern 77-68 on Sunday night.

Marcus Carr added 17 points on 10-for-10 free-throw shooting for the Gophers, who made all 19 of their shots from the foul line and confidently bounced back from a potentially crushing double-overtime loss at Purdue in their previous game.

Pat Spencer led Northwestern with 22 points, and Miller Kopp added 14 points. The Wildcats (5-8, 0-3), who have lost four straight games, are the only team left in the 14-team league without a conference win.

Northwestern lost the last three games by a combined 11 points, but this one was never truly close once Minnesota took control around the midpoint of the first half.

Williams finished a fast break with a dunk after he stole the ball from Pete Nance, giving the Gophers a game-high 57-34 lead with 9:45 to go. Kopp made three straight 3-pointers to give the Wildcats some life. They were 0 for 5 from behind the arc until that run. But the Gophers righted themselves after a scolding from coach Richard Pitino at the timeout. Demir hustled for a rebound from under the basket and fed Oturu for a dunk and a three-point play with 6:02 left that pushed the lead back to 14 points.

The Wildcats were averaging more than 20 attempts from 3-point range entering the night, but they went nearly three quarters of the game without even trying one. The Gophers went 6 for 19 from long distance in the first half, relying on a volume strategy against Northwestern's zone defense. Sharp ball movement helped them get plenty of open looks, though.

This was the first time Northwestern lost at Minnesota in seven seasons under coach Chris Collins, winning previously at Williams Arena in 2014, 2015, 2016 and 2018. Junior guard Anthony Gaines, though, was the only player on the current roster who took part in any of those, and he missed his third straight game with an unspecified upper-body injury.

Northwestern: The Wildcats were beaten 18-6 in second-chance points, providing little resistance in the paint for Oturu.

Minnesota: Getting shooting guard Payton Willis back from an ankle injury that kept him out of the previous three games was a big lift. With Williams staying in the starting lineup, Willis came off the bench with a quiet seven points in 21 minutes, but the depth his presence was provided was more than welcomed. The Gophers were gassed down the stretch against Purdue three days ago, which didn't help their attempt to pull out a victory in the clutch. Carr and Gabe Kalscheur played 48 minutes in that game, and Williams played 46 minutes.

Northwestern: Play at Indiana on Wednesday.

Minnesota: Play at No. 14 Michigan State on Thursday.