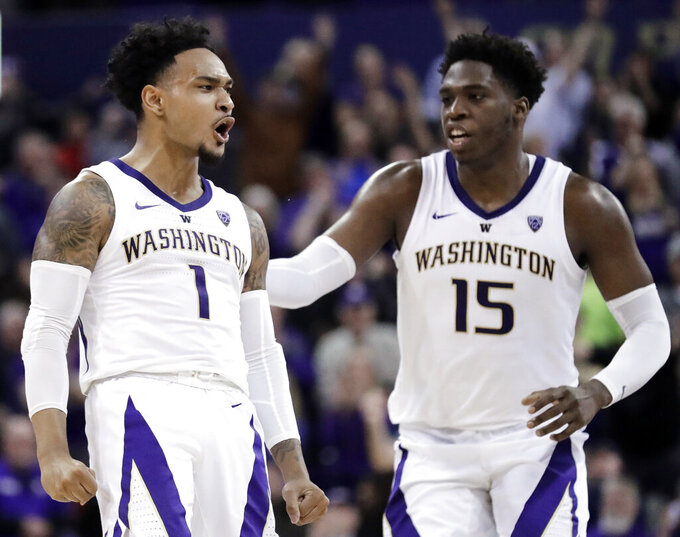 "Rock bottom will teach you lessons mountaintops never will," Crisp said. "That just lit a fire in us that never left and it's not going to."

After those lows, Crisp and his three fellow seniors, Noah Dickerson, Matisse Thybulle and Dominic Green, will leave Washington on top. They go out as Pac-12 regular-season champions and are expected to be headed to the NCAA Tournament for the first time in eight years.

Washington will close out the regular season Saturday night against Oregon, with a chance to become just the 19th team in conference history with at least 16 wins in league play since the conference went to an 18-game schedule in 1978-79. And they will celebrate their four seniors, who stuck through the struggles and a coaching change.

"It feels pretty good right now," Crisp said. "Hopefully we keep chipping away and this isn't the highest point."

No matter what happens the rest of the way, whether Washington makes a run in the NCAAs or endures an early exit, the four seniors have made their place in program history, not so much for helping lead the Huskies turnaround, but for the simple fact they stayed.

It would have been easy to leave after Lorenzo Romar was fired following a nine-win 2016-17 season — he was the coach who recruited them to Washington in the first place — but they were persuaded to stick around by new coach Mike Hopkins and bought into his system. It wasn't a perfectly smooth transition. But in less than two seasons, the Huskies went from the conference basement to clinching the conference crown with two weeks left in the regular season, even if it's a down year for the Pac-12 as a whole.

"I want them to think about how we stayed together through it all," Dickerson said. "Just through all the ups-and-downs. And then these last two years we've been on an up."

Thybulle has emerged as one of the top defensive players in the nation and could be the Pac-12 player of the year. Dickerson has been a bruising inside presence and one of the more frustrating matchups for opponents in the conference. Crisp started as a shooting guard but moved to point guard in Hopkins' system and has played his best as a senior. Green has been a mix of starter and reserve, but will be remembered for his game-winner last year against Arizona

They are a rarity because so few power conference programs see a group stick together for all four years and be major contributors. Some may transfer because they're unhappy with their roles. Some may leave early for professional opportunities. Some may just not prove to be talented enough to play or have injuries derail their careers.

"To see them have success has been really special," Hopkins said. "Those four guys; we got the job and you don't know who's staying, who's leaving. If you're going to have a roster or not have a roster. They stayed, they believed, they came together, they worked, they bought in."

The foursome was originally part of a six-pack of premier prospects that arrived on campus for the 2015-16 season. Dejounte Murray and Marquese Chriss both jumped to the NBA after their freshmen seasons. The four who remained suffered through the worst season at Washington since the early 1990s the following year. That included going 2-16 in conference play and a 13-game losing streak to close the season.

"You can't really explain until you've been in that position, until you've lost like 12 games in a row, you've lost by 40 at home in front of your friends and family," Crisp said. "Those moments they could break you or they could make you. Going through all that with this group of guys, really getting to know each other really has made me happy."