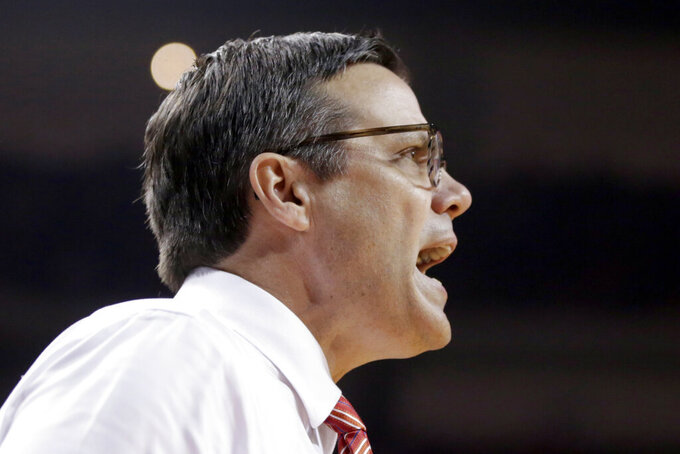 Nebraska coach Tim Miles yells instructions to his team during the first half of an NCAA college basketball game against Minnesota in Lincoln, Neb., Wednesday, Feb. 13, 2019. (AP Photo/Nati Harnik)

LINCOLN, Neb. (AP) — Nebraska caught a break in the final seconds — maybe even two — and now its longest losing streak in four years is over.

James Palmer made two free throws after Amir Coffey was called for a questionable foul with 1.1 seconds left, allowing the Cornhuskers to beat Minnesota 62-61 Wednesday night for their first win in eight games.

"It definitely feels good for us," Palmer said. "We were working hard. We lost seven in a row, but even in practice we were going hard. We wanted to focus, come out with a defensive mentality. Thanks to the fans for really showing support tonight. We appreciate it."

That Palmer was in position to get fouled was a stroke of good fortune for Nebraska. Moments earlier Minnesota's Dupree McBrayer had picked up a loose ball under the Huskers' basket after Thomas Allen had his shot blocked.

But McBrayer stepped out of bounds, giving Nebraska one more possession with 2.7 seconds left. Glynn Watson Jr. inbounded to Palmer, who leaned forward to shoot and drew enough contact from a backing off Coffey to get the whistle.

"I pump faked maybe once or twice and he bit a little bit and I jumped into him," Palmer said.

"I knew if he made the first one, we were going to win," Watson said.

Minnesota couldn't get off a shot before the buzzer, and an incensed Gophers coach Richard Pitino started to follow an official off the court, but the official waved him off and Pitino turned around.

"That one stings," he said. "Probably the six years in this league, that one stings the most of any of the games I've been a part of because we deserved to win."

Allen had his shot blocked by Oturu with time running down, and McBrayer grabbed the ball but turned it over when his foot touched the baseline.

Nebraska: Palmer's free throws won the game, but the resurgence of Watson is what helped put the Huskers in position to win. In the previous four games, Watson was 6 of 37 from the floor and 1 of 18 on 3-pointers with a total of 15 points. "Felt good. Just stayed with it, kept working, found the rhythm and got it going," he said.

Nebraska shot 50 percent, its best performance since shooting 53.3 percent against Creighton on Dec. 8. ... Huskers coach Tim Miles won his 50th conference game. Only three other Nebraska coaches won as many. ... The Huskers trailed by 11 points, the biggest deficit the Huskers have come back from to win this season. ... Murphy, who had 13 rebounds to go with his 19 points, posted his 17th double-double of the season.

"I'm not going to comment on any officiating unless you want to start paying fines." — Pitino, when a reporter asked about two calls against Minnesota in the last minute.