Pandemic challenges also give some teams chances to bond 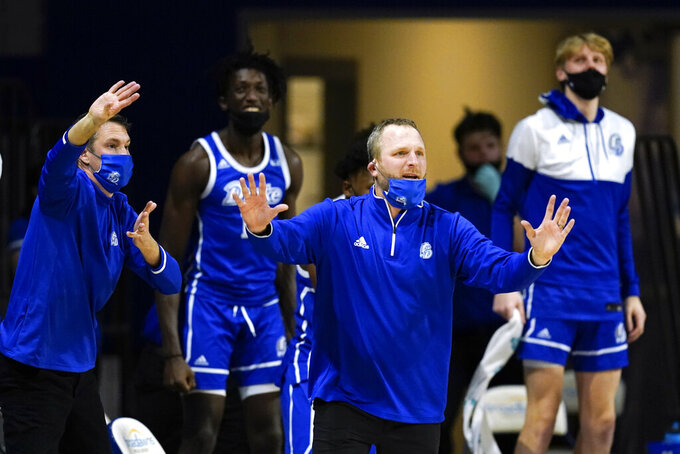 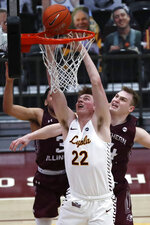 CHICAGO (AP) — Southern Illinois guard Trent Brown figures this is a season he will remember more than any other.

It's not just because of the obstacles and oddities teams are facing as they try to play during a pandemic. Brown has seen some positives in a difficult situation, like the way his team has bonded.

A strange time, too. A challenging time. And a time when, maybe, teams have forged stronger bonds.

It has forced conferences and schools to get creative in wading through a flood of challenges. Postponements and outright cancellations happen every day. One wrinkle seen much of the season in some leagues: back-to-back games.

The Missouri Valley Conference — which Southern Illinois plays in — and the Summit League ditched the traditional home-and-home scheduling format. Instead, teams are mostly playing two-game series on consecutive days on the same court in an effort to cut back on travel. In the Valley, each team also plays its designated travel partner at home and on the road.

For the players, keeping up with schoolwork can be a little more challenging with teams spending extra time in a different town. Meals are socially distanced. Contact with people outside their bubble is basically nil, home and away, something that's raised concerns about athletes' mental health.

Familiarity can breed contempt — with opponents and each other. But players also have more time to grow together when they're spending more time in one place rather than heading right back to campus.

“Just always being around each other and everybody getting to know each other, those longer road trips and just the extra hours that you’re around one-another, you just grow to appreciate every person on your team as a person and not just as a player or teammate,” Brown said. “You get to know really what makes them tick.”

Loyola Chicago star Cameron Krutwig said players in the past might have gone out. Now?

“It's just you and the team,” he said. “You can't really go out and do much just because of the protocols that are in place. It's, honestly, just a great time to be with the team, be with the guys.”

“You're going in with the mindset of you've got to go in there, get one win and get out," Brown, a sophomore from Scottsdale, Arizona, said as the Salukis traveled to Chicago to face No. 21 Loyola on Friday and Saturday. "Whether you win or lose that first one, you've got to be able to turn around and pretty much get back into game mode within minutes after that game ends. If you lose the first one, you really just can't hang your head that low, or else you're sure gonna lose the next one.”

Brown and his teammates will put his plan to the test: The Salukis lost the opener Friday night as Loyola extended its home win streak to 21 games.

Home teams in the Missouri Valley were a combined 45-35 against conference opponents compared to 64-26 last year. While the gap has narrowed considerably, the numbers still favor the hosts in back-to-back sets.

Hosts in the Valley have seen jumps in field-goal percentages in 20 of 34 games on the back end and increases in scoring by an average of 2.9 points in second games. For visitors, shooting percentages went up just eight times, and their scoring has dropped by 3.6 points on average.

In the Summit League, there have been 16 sweeps and 13 splits in the 29 two-game series. Take Denver and Omaha, with one league win each, out of the mix and series involving the top seven teams have resulted in six sweeps and 10 splits.

“Games are going to be more competitive just because you’re seeing the same team back-to-back, so it’s easier to scout the next day, or you know you have to come play harder the next day,” said South Dakota State's Douglas Wilson, the 2019-20 Summit League Player of the Year.

“In a way, honestly, it brings us back to our AAU days,” he said. "Then again, we were also a lot younger and probably weren’t putting as much work in as we are now.”

A visitor that loses the first game can’t look forward to a rematch on its own court as in years past. Then again, teams that drop an opener can get quick payback.

“If you lose the first night, I think it gives you a better chance because it’s fresh, those hard feelings are fresh in your mind of what just happened, so maybe you’re a little more ready to go,” South Dakota State coach Eric Henderson said. "More times than not, I think that’s why you don’t see that sweep very often.”

Just another wrinkle in a strange, unforgettable season.

“You’ll remember more of it, you’ll remember more about the teammates you had during this season than you probably will on others just because of how many odd situations that you’ve had to push through and be around,” Brown said.