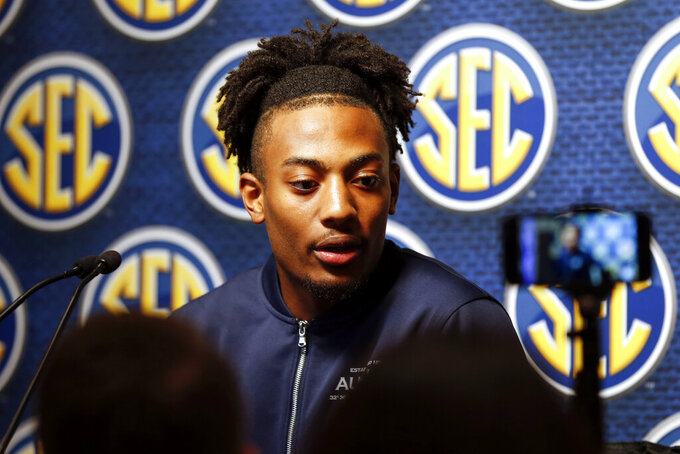 AUBURN, Ala. (AP) — The Auburn Tigers will rely on a new cast of leading men this year as they try to maintain the momentum coming off their first Final Four run.

Gone are the program's top 3-point shooter Bryce Brown, playmaking point guard Jared Harper and versatile, athletic forward Chuma Okeke . The preseason No. 24 Tigers do have back big men Austin Wiley and Anfernee McLemore, guard Samir Doughty and a new standard to strive for after the program's best season.

It's heady stuff for a program that had endured years of struggles.

"It takes a while to change the culture, and you don't do it in a year or two," said Auburn coach Bruce Pearl , architect of the program's turnaround. "We got to the Final Four last year, but that was five years in the making.

"I will say this, and anybody who's had any level of success will understand it, it's way easy to get something going than it is to keep it going. Keeping it going is going to be more challenging than the job we did in getting it going."

Pearl, who received a new five-year deal worth about $20 million, and the Tigers will try to keep it going with a mix of eight newcomers and five seniors.

Brown, Harper and Okeke were the stars of that team. Okeke was the 16th overall pick by the Orlando Magic, ending an 18-year drought for the Tigers in the NBA draft.

Wiley, Pearl's top-rated recruit at Auburn, is back after struggling with injuries much of last season.

"We have some great young guys, and they're buying into the culture," Wiley said. "We're just going to be a tough defensive team, and if everybody stays healthy, we're going to get there."

McLemore and Doughty both also averaged about seven points a game.

One potential wildcard for the Tigers is if the school will receive a notice of allegations from the NCAA stemming from the bribery scheme run by former assistant Chuck Person.

Some other things to watch during Auburn's 2019-20 season:

Isaac Okoro, a 6-6, 225-pound guard/forward, was Auburn's top recruit and is expected to make an immediate impact. Pearl touts him as a potential SEC freshman of the year and said he'll quickly be one of the Tigers' best players.

"He is the best defensive guard that I've ever coached," Pearl said. He said Okoro can guard any position from point guard to center, "and I've never had a player before who could do that."

J'Von McCormick is expected to replace Harper as the starting point guard with freshman Tyrell Jones backing him up. McCormick had some of his best games in the NCAA Tournament but has the biggest shoes to fill as well.

"There will be no player in college basketball missed more than Jared Harper, because he did everything," Pearl said. "He scored, he defended, he finished the games and he was a great leader. But we've got really, really good pieces."

Injuries and a year-long NCAA suspension have limited Wiley's career, but Auburn will likely rely on him more this season. He averaged 6.9 points and 4.0 rebounds last year while playing just 13 minutes a game.

Guard Jamal Johnson could be a big contributor after sitting out last season following a transfer from Memphis. The son of former NBA player Buck Johnson, he started 27 games for Memphis as a freshman and was the team's No. 2 3-point shooter. He's a former teammate of Wiley's in high school.