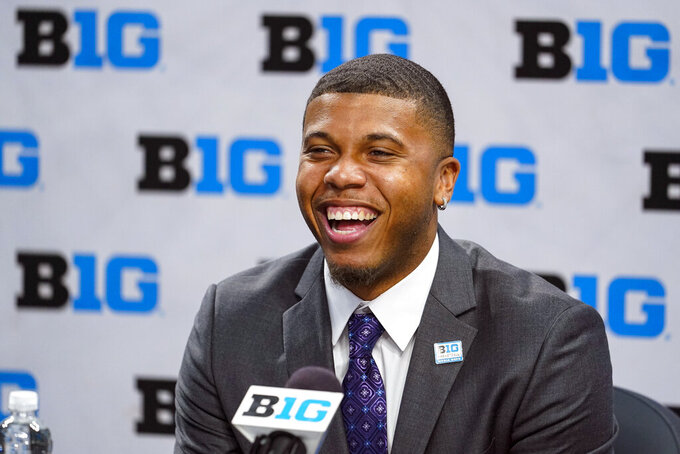 STATE COLLEGE, Pa. (AP) — Myles Dread understands his final season at Penn State could be considered a rebuilding year. He also believes the Nittany Lions can build something special on the fly.

The senior guard is one of a few familiar faces back for an older team looking to rebound from a tumultuous 2020. So far, the team's experiences with new head coach Micah Shrewsberry and a handful of veteran transfers hungry to win on big stages have them eager to start.

“Coach Shrews is a basketball genius,” Dread said. “He knows the game inside and out. I’ve never heard a question go unanswered. He just has the answers right now.”

Shrewsberry was hired in March to lead a team that struggled last season under interim coach Jim Ferry.

Penn State lost six of its first nine games and started 0-5 in Big Ten play after longtime coach Patrick Chambers resigned a month before the season opener. Penn State was investigating Chambers’ past conduct with players.

Penn State finished 11-14 , with just seven wins in the Big Ten. The university cut ties with Ferry and had top scorers Myreon Jones and Izaiah Brockington enter the transfer portal.

All had been key pieces in 2019-20 when the Nittany Lions spent most of the season in the AP's Top 25 rankings. They were poised to make what would’ve been their first NCAA Tournament appearance since 2011 before the tournament was canceled.

Dread was part of that squad. So were John Harrar and Seth Lundy, a pair of forwards Shrewsberry grew familiar with as an assistant at Purdue.

“I’ve seen ‘em, I’ve seen their stats, I’ve studied them,” Shrewsberry said. “I’ve tried to game plan against them. So it’s helped me. You do have to get up close and personal to see what it really is. Like having the summer to work with these guys, to see what they can do, now we build off of that here in the fall.”

Harrar had 94 offensive rebounds a year ago, which ranked third in the Big Ten. Lundy is the team’s leading returning scorer. He and Dread averaged 10.1 and 7.3 points, respectively, last year.

Shrewsberry believes he has picked a few gems from the transfer portal that’ll help replace Jones’ 15.3 points per game and Brockington’s 12.6 point average.

Fifth-year senior Jaheam Cornwall averaged 14.1 points, 3.8 rebounds and 3.2 assists at Gardner-Webb last year, and could earn plenty of backcourt minutes with Jalen Pickett, another senior who starred for his last team.

Pickett was the Metro Atlantic Athletic Conference’s player of the year last season after averaging 12.9 points, 6.3 rebounds and 4.3 assists for Siena. He also made 40% of his 3-pointers.

“He’s done a great job bringing in people, pieces that we need to win,” Harrar said. “He wants to win right away. We have old dudes that can learn quick.”

Penn State opens against Youngstown State at home on Nov. 10. Notably, Penn State plays LSU early in the Emerald Coast Classic on Nov. 26, and hosts Miami on Dec. 1 in the Big Ten/ACC Challenge.