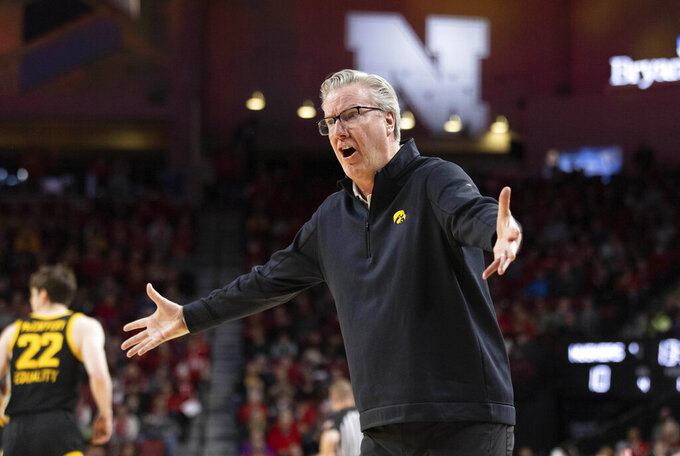 Iowa head coach Fran McCaffery yells at the referees during the first half of the team's NCAA college basketball game against Nebraska on Friday, Feb. 25, 2022, in Lincoln, Neb. (AP Photo/Rebecca S. Gratz)

LINCOLN, Neb. (AP) — Tony Perkins' right shoulder has been bothering him all season, not enough to keep him out of games, but enough to be annoying when driving into contact or bumping into a screen.

The Iowa sophomore was pleasantly surprised when, for the first time in a long time, he felt no pain during pregame warmups Friday. After he made his first two shots, he knew it would be his night.

Perkins scored a career-high 20 points to lead the No. 25 Hawkeyes past Nebraska 88-78, giving his team a boost while Big Ten scoring leader Keegan Murray struggled to get going.

“Before the game started, I told our trainer I'm feeling it, my shoulder's not hurting today,” Perkins said. “I came out shooting, and it felt good. It's been on and off. Today my adrenaline was going, so I wouldn't have been feeling it even if it were to hurt."

Perkins, who had 15 points in the second half, had his first double-digit scoring game since Dec. 6 against Illinois (16 points).

“He always had that in him,” teammate Kris Murray said. “He’s a competitor, and he's always looking to score the ball. We know he can score the ball and he did that at great times tonight. When he’s aggressive, I feel our team is so much better, too.”

Keegan Murray had 15 points and 11 rebounds for his seventh double-double of the season. However, he couldn't find his shot early and finished 6 of 13 from the field while seeing his streak of games with at least 20 points end at seven.

His brother Kris, who had 12 points, did most of his scoring in the second half as the Hawkeyes began taking control.

“Road games are tough in the Big Ten, especially playing a team like Nebraska, which has a lot of guys that can take you off the dribble and they feed off their crowd at home,” Kris Murray said. “They gave us a really good fight. We went on a little bit of a run and I think that’s what separated us.”

Alonzo Verge Jr. led the Huskers with 18 points, C.J. Wilcher had 14 and Bryce McGowens had 13.

Iowa had difficulty pulling away, never leading by more than five points until Jordan Bohannon bounced a pass into the lane that Keegan Murray dunked for a 58-51 lead with 11:33 left.

A 3 by Wilcher got the Huskers within 58-56, but Iowa capitalized on a three straight bad passes by the Huskers to start an 11-0 run and build some cushion.

Perkins made two free throws after Verge threw the ball away, Kris Murray scored on a snaking move through the lane after Verge's pass bounced off Walker's chest and went out of bounds, and after McGowens' pass bounced out of Walker's reach, Murray hit a 3 and a layup to make it 69-56.

“I thought our fight was phenomenal really all game long," Nebraska coach Fred Hoiberg said. “We have those three- to four-minute stretches where teams go on those runs against us. Tonight had nothing to do with effort. We’d done a pretty solid job of taking care of the basketball and then we go three possessions in a row. That’s when they stretch it and open up the lead, but the fight was there.”

Iowa: The Hawkeyes secured their fourth straight 20-win season and eighth in 10 years. They also posted their third two-game sweep of the season, having also won twice against both Maryland and Minnesota.

Nebraska: The Huskers lost their 24th straight against a top-25 opponent a day after Nebraska athletic director Trev Alberts announced Hoiberg would return for a fourth season despite three straight years with at least 20 losses. Hoiberg is 6-49 in Big Ten play and 21-66 overall.