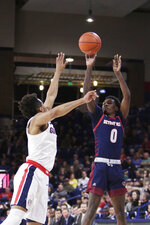 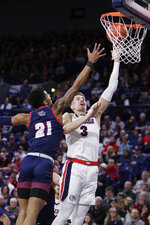 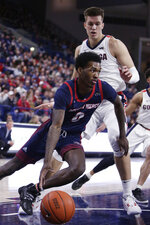 SPOKANE, Wash. (AP) — Top-ranked Gonzaga beat Detroit Mercy by 21 points in its first game since being ranked No. 1, but coach Mark Few wasn't terribly pleased with the effort of his players.

Few said the No. 1 ranking is a big motivator for opponents.

‘’You get all kinds of crazy efforts out of the people you are playing against,'' Few said. "'We've got to embrace this challenge.''

Filip Petrusev scored 22 points and Ryan Woolridge added 21 points and eight assists for Gonzaga (14-1), which earlier Monday retained the No. 1 ranking in the poll for the second week. Gonzaga had not played since Dec. 21.

Drew Timme scored 13 points and Anton Watson 11 for the Zags, who wrapped up the non-conference season with their victory.

Antoine Davis scored 31 points and Justin Miller 17 for Detroit Mercy (2-12), which was playing the nation's top-ranked team for the first time since they lost to Michigan in the 1977 NCAA Tournament in Dick Vitale's last game as the Titans coach.

The Zags came out hot and built a 27-8 lead in the first nine minutes. They got three 3-pointers from Woolridge during the run.

"'We were all jacked up,'' Detroit Mercy coach Mike Davis said. "'We've been talking about this game since October. Our guys were a little tight.''

The Titans fought back and Davis hit a long 3-pointer to bring Detroit Mercy within 32-19. Three consecutive 3-pointers by the Titans — by Davis, Willy Isiani and Jordan Gorman — cut Gonzaga's lead to 40-30.

The Zags shot 73 percent (19-of-26) in the first half, including 7-of-11 from 3-point range. Woolridge led all scorers with 17 points in the first, including all four of his 3-point attempts.

"We were getting the ball to the right spots and the right people,'' Few said.

Neither team shot well in the second half.

But the Bulldogs scored the first 12 points of the second, building a 65-37 lead and holding the Titans scoreless for more than four minutes.

Davis hit a 3-pointer to bring the Titans within 77-58 late in the second half, but the Bulldogs held them off for their sixth consecutive win.

"'I loved playing this game,'' Mike Davis said, noting that Gonzaga was very talented and very well-coached. "'Hopefully this can help us in our conference.''

Few said his team has done a good job so far of dealing with the hype of a high ranking all season.

"They've done a wonderful job of handling everything thrown at them,"' Few said.

Gonzaga forward Killian Tillie did not play in the game, although he was available if needed. Few said the team wanted to give him a rest because they play three games this week.

Detroit Mercy: The Titans are 20-131 against ranked teams, including beating top-ranked Bradley and Oklahoma A&M during the 1951-52 season ... They have not beaten a ranked team since 2002 ... Antoine Davis, son of coach Mike Davis, came in averaging 25 points per game, third in the nation ... But the Titans average just 66.9 points per game.

Gonzaga: The Bulldogs are coming off a week-long break for Christmas and this was their first defense of the No. 1 ranking this season ... The Zags average 88 points per game, second in the nation, and are the only team with six players averaging in double digits ... Gonzaga went 308-54 in the past decade, the most victories in the nation.