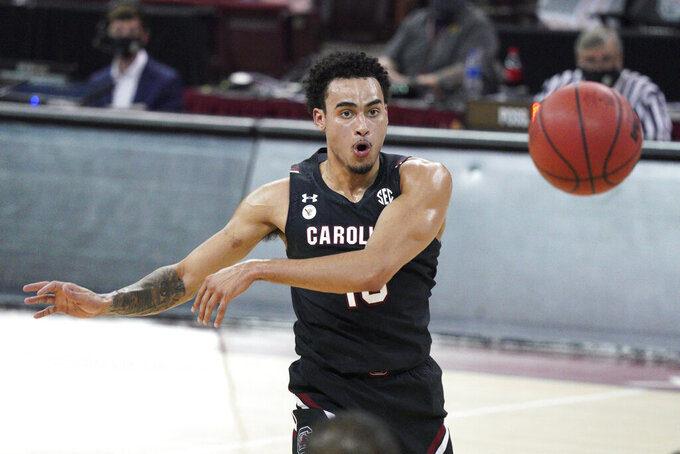 COLUMBIA, S.C. (AP) — John Petty Jr. wasn't going to let another one slip away for Alabama.

The 11th-ranked Crimson Tide were coming off their first Southeastern Conference loss of the season last Saturday and were locked in a tight game with pesky, determined South Carolina.

Behind Petty's 20 points and three 3-pointers, they came through, bouncing back from their loss to No. 10 Missouri with an 81-78 victory over the Gamecocks on Tuesday night.

“I was going to do whatever it took to get a win,” Petty said.

But James Rojas preserved the win with two foul shots to keep Alabama's best league season in more than six decades going. The Crimson Tide (16-5, 11-1) won their sixth straight over the Gamecocks.

With South Carolina trailing 79-76, coach Frank Martin said he drew up a play with three options for a tying 3-pointer. Instead, Jermaine Couisnard connected with Justin Minaya for an uncontested layup.

The Gamecocks were forced to foul Rojas, who made his free throws.

“Instead of running what we asked to run, we just kind of ... no mental connection with the situation,” Martin said.

The Gamecocks had their chances. Wildens Leveque tied it at 59 with 11:11 left before Alabama went ahead for good on Jaden Shackelford's layup on the following possession. Jahvon Quinerly extended the lead with a jumper.

The Gamecocks scratched back within 65-64 on Lawson's 3-pointer and a foul shot by Bryant. But Petty, the team leader in made 3s, hit another from behind the arc and South Carolina could not rally, losing for the third time in its past four games.

Alabama, which fell behind by 22 points to Missouri before losing 68-65, trailed South Carolina 16-5 with less than five minutes elapsed.

That's when the long-range shooting of Petty and Joshua Primo got Alabama back in contention. Primo, a 6-foot-6 freshman, had totaled seven points combined in his last three games with only one 3-pointer. This time, he hit three of his team's six 3s in the first 20 minutes and had 10 points at the break.

Quinerly finished with 13 points for the Tide while Petty added eight rebounds, two blocks and a steal.

Alabama: The Crimson Tide have shown grit and depth while building a sizeable lead in the SEC. They will be difficult for chasers Missouri and Tennessee, both with six league wins, to run down with only six games left. Alabama won its last regular-season title in 2002.

Alabama had a season-worst 22 turnovers after entering averaging fewer than 14 a game. Crimson Tide coach Nate Oats wants that to improve, “but it's nice to win a close one, too,” he said.

Oats said freshman forward Juwan Gary suffered a shoulder injury that would be reevaluated when the team got back to campus. Gary fell hard to the court, grimacing and yelling in pain before he was helped to the locker room. Oats said it was disappointing for Gary, who is from Columbia and had family in the stands.