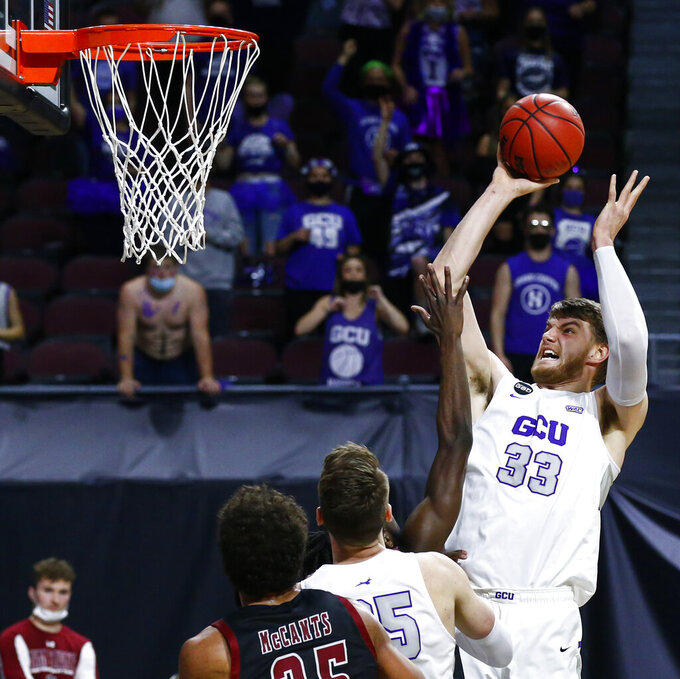 INDIANAPOLIS (AP) — There has never been a better time to have senior leadership in the NCAA Tournament than this season.

There was no real offseason for young players to improve. No exhibitions and fewer non-conference games for teams to come together. And the shadow cast by COVID-19 that threatened to derail a season with a single positive test.

So while experienced teams always have an edge during March Madness, those with seniors running the show may be at an even bigger advantage this year. Iowa star Luka Garza and Gonzaga counterpart Corey Kispert already are household names worth watching, but there are plenty of other seniors that should threaten to steal the spotlight.

Virginia intends to play after withdrawing from the ACC Tournament because of COVID-19 protocols, which means fans will get to say Sam Hauser running the show. The transfer from Marquette averages 16 points and 6.7 rebounds.

Alex Barcello has become such a star at BYU the past two seasons that some forget he began his career at Arizona.

The senior leadership of Austin Reaves and Brady Manek helped Oklahoma climb into the top 10 earlier this season, though a rough finish left the eighth-seeded Sooners with a first-round date against No. 9 seed Missouri.

Speaking of the Tigers, they're also led by a pair of seniors. Dru Smith is their leading scorer and Jeremiah Tilmon finally reached his potential this season, and both aim to help Missouri snap a four-game NCAA Tournament skid.

Squirreled away in a smaller conference on the West Coast, UC Santa Barbara seniors JaQuori McLaughlin and Devearl Ramsey went largely unnoticed. But the No. 12 seed Gauchos should give No. 5 Creighton all it can handle.

Garza gets the headlines in Iowa City but fifth-year senior Jordan Bohannon is a big reason why the Hawkeyes are a Final Four contender. The consummate floor general averages 10.9 points, 3.1 rebounds and 4.5 assists.

Baylor guard MaCio Teague isn't just overlooked around the country, he's often overlooked on his own team. That's what happens when you share a backcourt with Jared Butler and Davion Mitchell, despite scoring 16.2 points a game.

Herb Jones is an All-American candidate and Jaden Shackelford is Alabama's leading scorer, but John Petty Jr. makes the SEC Tournament champs go. He shoots 44% from beyond the arc and is the school's career leader in 3-pointers.

“You know what’s amazing? Just to see our school do both things in basketball and football just tells about the school itself, the way they recruit, the people we have around our school. It’s amazing," Petty said. "It’s kind of, like I say, indescribable just because all these things haven’t been done in so long.”

The beauty of the NCAA Tournament is the out-of-nowhere teams and players that set brackets ablaze, and often they're veterans that have been through the grind. That's the case with Javion Hamlet, who has No. 13 seed North Texas ready for home-state hope Purdue, and Isaiah Miller, who will lead No. 13 seed UNC Greensboro against Florida State.

One of the trendy upset picks is No. 14 seed Colgate over Arkansas. Both teams get up and down the floor at a breakneck pace, but if the Raiders want to hang around into the second half, they'll need Jordan Burns to light it up. One of the nation's prolific shooters averages 17.0 points while shooting 44.4% from the arc.

“We’ve got to contain Burns,” Razorbacks coach Eric Musselman said. "They’re an analytics team. They make 3s. They make layups. So, we look forward to the prep over the next few days.”

At least two veterans will have to provide some leadership from the bench: Michigan star Isaiah Livers is out indefinitely after an MRI taken following a Big Ten Tournament quarterfinal win over Maryland revealed a stress fracture in his right foot, and Villanova's Collin Gillespie tore a knee ligament earlier this month to end his season early.

Then there's Tennessee forward John Fulkerson, who sustained facial fractures in an SEC Tournament win over Florida and underwent surgery Sunday. Fulkerson has not been ruled out, though — his status will be determined later this week.

“I’ve said it before. It’s never going to be about John Fulkerson,” Tennessee coach Rick Barnes said. “He wants his teammates to win and wants to be a part of it, and nobody is pulling more for him to do that than his teammates.”