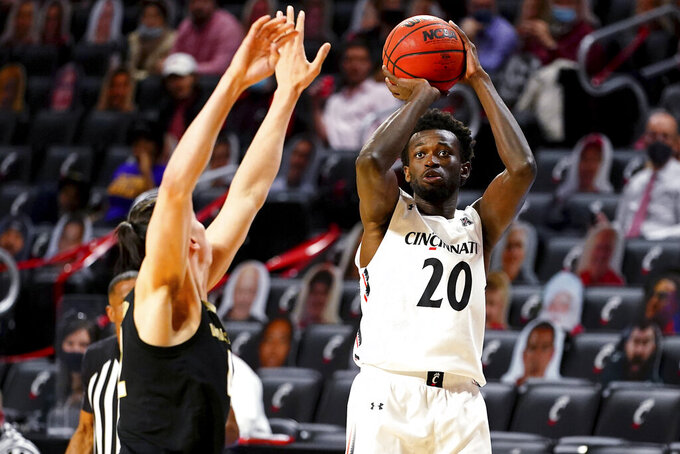 Pippen, after missing three games with a hip injury, couldn't miss in the first half, scoring 23 points on 6-for-7 shooting and making all five of his 3-point tries and all six free throws. He finished 10 of 13 for the game, 5 of 6 from distance and 11 of 12 at the line.

Wright's double-double was his first.

Senior Keith Williams scored 20 points in his final home-court appearance to lead the Bearcats (9-10). Mika Adams-Woods added 16 and Jeremiah Davenport 15 to the vocal pleasure of the 2,000 fans allowed into the 12,000-capacity Fifth Third Arena.

Vanderbilt surged ahead by as many as 18, weathering two late-game rallies by Cincinnati. About midway through the final period, the Bearcats cut the gap to seven, 61-54 on a Davenport dunk.

The Commodores surged 10-2 only to again go cold and have Cincinnati rally as close as seven, coming to 71-64 when Adams-Woods converted a three-point play with 3:57 left.

The Commodores closed the game on a 7-0 run over those final minutes as Cincinnati missed its final six shots.

Pippen not only knocked down his first five 3-pointers, he made two of them as he was being knocked down. Pippen had two four-point plays in the first half.

The game came together in a rush after Cincinnati's scheduled opponent, SMU, was forced to pull out due to COVID-19 concerns within its program.

Vanderbilt closes out the regular season at Ole Miss on Saturday. Cincinnati closes regular-season play at East Carolina on Sunday.