Pitino, Gophers again have new look with trio of transfers 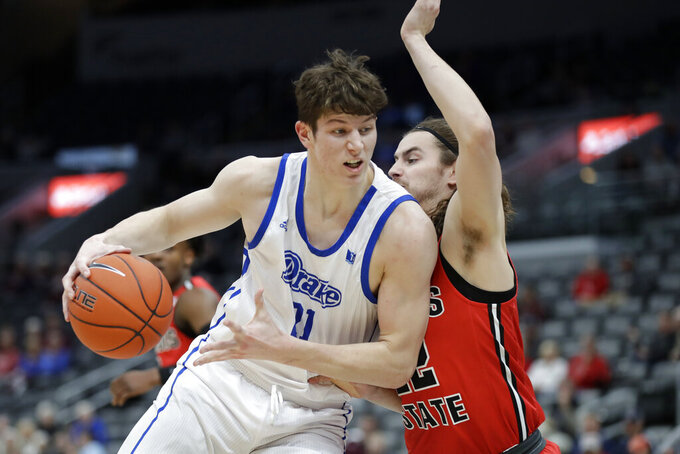 FILE - Drake's Liam Robbins, left, heads to the basket as Illinois State's Matt Chastain defends during the first half of an NCAA college basketball game in the first round of the Missouri Valley Conference men's tournament in St. Louis. As coach Richard Pitino starts a pivotal eighth year at Minnesota, the Gophers will again try to bounce back from a bad season after finishing in 12th place in the Big Ten in 2019-20. Liam Robbins, one of three transfers and six newcomers on the roster, will attempt to replace departed star center Daniel Oturu. (AP Photo/Jeff Roberson, File)

MINNEAPOLIS (AP) — Richard Pitino has returned for a pivotal eighth year at Minnesota, coming off another lower-half conference finish that was overshadowed by the coronavirus-prompted shutdown of the sport.

Though the pandemic limited their offseason development, the Gophers didn't get stagnant. The latest attempt to make their way toward the top of a Big Ten that's sure to be as stacked as ever has been reinforced by the arrival of three immediate-impact transfers.

Throw in three incoming freshmen, and Pitino will be again guiding a revamped roster in reflection of this trend in major college basketball. After going 15-16 in 2019-20, Pitino's third losing record, and placing 12th in the conference, his fourth bottom-four finish, the change probably can't hurt.

“It is kind of fun in its own little way, because it kind of gets you as a coach to step back and build it from the first floor a little bit and make sure everybody’s on the same page,” said Pitino, who is 127-108 overall at Minnesota and 48-82 in the Big Ten.

The early departure of center Daniel Oturu, a widely projected second-round pick in the NBA draft, was softened when 7-footer Liam Robbins gained NCAA approval to play right away after spending his first two years at Drake. Brandon Johnson, a graduate transfer from Western Michigan, will join Robbins in the post. Fifth-year senior Eric Curry, who's coming back from the second season-ending knee injury of his college career, will provide forward depth along with Jarvis Omersa and Isaiah Ihnen.

Team leader Marcus Carr and outside shooting specialist Gabe Kalscheur, who were second and third on the team in scoring last season, will be flanked in the backcourt by 6-foot-6 wing Both Gach, a Minnesota native who played his first two years at Utah. Kalscheur is the team's best defensive player whose 3-point accuracy dropped last season from 41% to 34%.

“When you have good guards, you have a chance,” Pitino said.

Robbins was named to the 20-player preseason watch list — including five from the Big Ten — for the Kareem Abdul-Jabbar Award for the best center in the country. The nephew of Gophers assistant coach Ed Conroy and cousin of reserve guard Hunt Conroy, Robbins heard from about 25 schools during his 24-hour stay in the NCAA transfer portal. His family connection and a conversation with Pitino made the decision easy.

“I loved what Minnesota had to offer me, so it just seemed like a no-brainer. I didn’t want to lead anyone else on when I already felt like this was the place I needed to be,” Robbins said.

After exploring the pre-draft process, Carr passed on turning pro and was picked for the 10-player preseason All-Big Ten team. He set the program record with 207 assists in his sophomore season and was second in the conference with an average of 6.7 assists per game. He also led the Big Ten in minutes (36.8) per game.

Pitino, whose buyout is $1.75 million if Minnesota were to fire him prior to April 30, 2021, has reached the longest tenure for a Gophers head coach since the 13-year run for Clem Haskins ended in 1999. Pitino has the sixth-longest tenure of the 17 head coaches in the program's 126 seasons.

Jamal Mashburn Jr. is the headliner of the freshman trio, the son of 11-year NBA veteran Jamal Mashburn Sr. who played for Pitino's father, Rick Pitino, at Kentucky. Mashburn will back up Carr.

The Gophers recently had to halt workouts and practices due to COVID-19, a pause confirmed on Tuesday by the university. With the season opener on track for Nov. 25, the Big Ten has yet to release the conference schedule, which has also kept teams from finalizing their slate of non-league games. Minnesota has one date confirmed, a Dec. 8 matchup at home against Boston College as part of the ACC/Big Ten Challenge. The Eagles beat the Gophers 68-56 in Massachusetts two years ago.