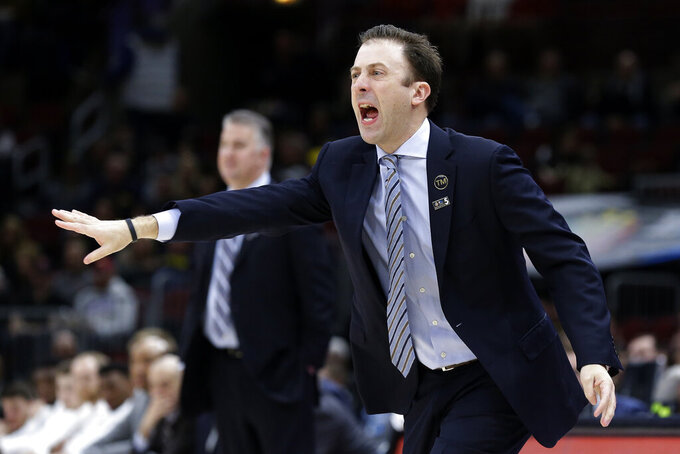 Minnesota head coach Richard Pitino directs his team during the first half of an NCAA college basketball game against Purdue in the quarterfinals of the Big Ten Conference tournament, Friday, March 15, 2019, in Chicago. (AP Photo/Kiichiro Sato)

MINNEAPOLIS (AP) — Minnesota has had no bigger fan over the last six seasons than coach Richard Pitino's father, with Rick Pitino taking plenty of opportunities along the way to support his son, advise the players and just plain root for the Gophers .

That was before they were paired against Louisville in the first round of the NCAA Tournament.

Ah, but Rick Pitino won't be behind the bench in a maroon-and-gold sweater singing The Minnesota Rouser fight song Thursday when the No. 10 seed Gophers face the No. 7 seed Cardinals. He has his own professional team in Greece to coach, with the Euroleague season winding down.

So, no, this game isn't about exacting some measure of revenge for the sake of the family on the school that fired his dad.

The pairing immediately produced a hearty portion of sports talk-show content, sure. The soap-opera fans in the crowd would relish the tension of Rick Pitino cheering for victory over the program he led to a national championship in 2013, a title later vacated because of a team dormitory sex scandal. The federal investigation that linked Louisville to a bribery case led to his ouster in 2017 .

For Richard Pitino, though, this game against a Cardinals team for which he served two stints as assistant coach under his father will be about trying to keep up the progress the Gophers have made this month at the end of another uneven season.

"I've got little kids. I like it here. Dehumanize it as much as you want, but I want to be here," Pitino said Wednesday before the Gophers left for Des Moines, Iowa. He acknowledged wincing at times this season upon seeing or hearing his name on the "hot seat" lists of coaches who could be fired without an NCAA Tournament appearance. Ultimately, his future will rest with athletic director Mark Coyle, the third boss Pitino has had in six years.

"I don't know if it's true or not. I didn't want to ask Mark," Pitino said, smiling. "But when you are able to do that, yeah, it's fulfilling. Hopefully we can make a little run at it and continue to build this program."

After just one season in charge at Florida International, Pitino was hired at age 30 by then-AD Norwood Teague after the search to replace the fired Tubby Smith ran into some dead ends.

The Gophers won the NIT in his first year. They weren't invited to a postseason tournament in 2015 or in 2016, when they bottomed out with a program-worst 8-23 record. Their rebound in 2017, with an 11-7 finish in conference play that was Minnesota's best in 20 years, earned Pitino the Big Ten Coach of the Year award. Last season, though, brought more setbacks and another losing record. Injuries have been a significant issue, but off-the-court trouble also has surfaced for some players.

This winter, the Gophers stumbled through six losses in their first six February games, before two wins over regular-season conference co-champion Purdue solidified their resume for an at-large bid.

"I try not to look back too much on it," Pitino said. "You try to keep making this thing as strong as you possibly can."

Keeping more in-state players home ought to help. Three freshmen from the Twin Cities area joined the team this season, with guard Gabe Kalscheur and center Daniel Oturu entrenched in the starting lineup. Leading scorer Amir Coffey, a junior, is another local product.

As a native of the East Coast, Pitino has taken some time to fit in. He's a straight-talker with a penchant for sarcasm that can be an acquired taste in the low-key northern culture. He has gained the respect of his players, however, through honesty about their limitations on the court at a program that has reached the Final Four only once, a 1997 appearance that was later scrubbed by an academic fraud scheme.

"I've told them over and over and over again: The reality is you're a role guy at the next level. Not a lot of LeBron James here," Pitino once said, describing his imploring of star forward Jordan Murphy to become a relentless rebounder to make up for his lack of range and height. "Play with incredible energy and toughness to where when an NBA scout looks at you, they go, 'Hmm, there's something there.'"

That's what Pitino and his staff are trying to convince Minnesota's best prep players, that there's something there.

"There is nothing you can sell more, facilities or whatever," Pitino said, "than local kids having a great experience."