Plan B as in BYU: Cougars face Chanticleers on short notice 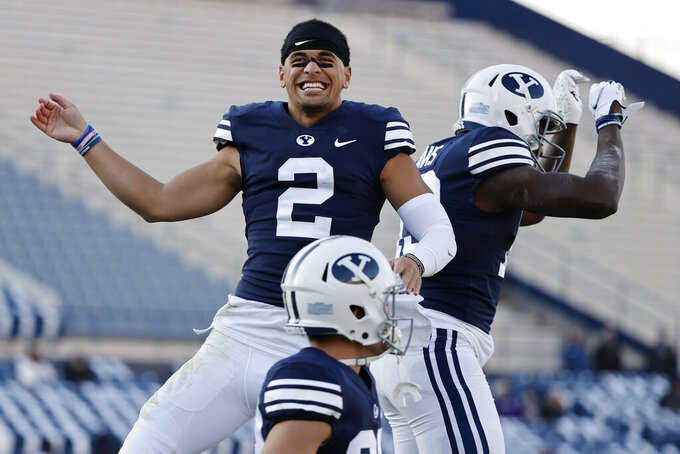 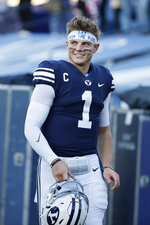 Word came to Coastal Carolina on Wednesday that the most significant home game in the history of the program was in serious jeopardy.

The 14th-ranked Chanticleers were scheduled to face No. 25 Liberty on Saturday in an unexpected Top-25 matchup that persuaded ESPN to send "College GameDay” to Conway, South Carolina, for the first time.

But COVID-19 had crept into the Liberty program. Coastal Carolina needed a Plan B — as in BYU. Coach Kalani Sitake's eighth-ranked Cougars have been primed to pounce on short notice if the opportunity arose to bolster their chances to reach a major bowl.

"Last week I said: 'Kalani, it's kind of like when there's a married couple about ready to have a baby and you have your bag packed by the door, that's how it's going to be maybe,'" BYU athletic director Tom Holmoe said. “You might have to pick up your bag and go.”

With ESPN and the Sun Belt Conference's assistance, Coastal Carolina and BYU finalized a deal Thursday morning to play a game about 56 hours later.

The upstart Chanticleers (9-0) and barnstorming Cougars (9-0) meet Saturday in maybe the most intriguing game of the college football weekend, one that could position the winner for a multimillion-dollar postseason payday.

Coastal Carolina athletic director Matt Hogue said Liberty officials reached out Wednesday to say the Flames might not be able to play. Holmoe said a friend reached out the same day to tell him to keep an eye on the Liberty situation.

“Once you're in that situation this year, you know we're all kind of playing by a different book,” Hogue said. “We obviously have a lot invested in this weekend so we wanted to start exploring what opportunities might be out there.”

Kurt Dargis, director of college football for ESPN, said he got a call from Sun Belt Conference officials Wednesday afternoon informing him of the potential problem with what the network had turned into a showcase game.

ESPN owns the television rights for both the Sun Belt and BYU, and has been helping the independent Cougars rebuild a schedule that fell apart when Power Five conferences decided to play mostly league games during the pandemic.

Dargis called Holmoe and asked if BYU was interested. Holmoe said he needed to run it by Sitake, but it only took the AD about 45 minutes to get back with the news: If Liberty could not play, BYU would.

“It was really a whirlwind and went very quickly,” Dargis said.

Even though the Cougars did not have a game scheduled for Saturday, they had practiced Monday and Tuesday as if they might. No set opponent, only possibilities.

“I'm grateful to our coaches,” Holmoe said. “They've watched a lot of film this week.”

BYU's next scheduled game is Dec. 12 vs. San Diego State.

Holmoe has been trying to add games for weeks. Washington called the week before Thanksgiving, but the Huskies couldn't guarantee they wouldn't have to pull out if another Pac-12 team became available. BYU wanted to see where it stood in the College Football Playoff rankings before it committed to a game that ultimately would not have happened anyway.

On Wednesday, BYU quickly transitioned to Coastal Carolina prep in practice and coaches pulled long nights at the office with no assurance the game would be played. Even though the game was not yet a done deal, BYU's equipment truck started Wednesday night on the 2,200-mile trip from Provo, near the foot of Utah's Wasatch mountains, to Coastal's campus about 10 miles from the Atlantic Ocean.

At Coastal Carolina, where the Chants are having their best season since moving to the highest level of Division I football in 2016, the transition from prepping for Liberty to BYU went into overdrive. Coach Jamey Chadwell said they'll have to keep it simple.

“When it's this short of a timeframe, you got to go back to things that you hope you can do well and see if it will hold up against a really quality opponent that's coming in here,” Chadwell said.

Kickoff for Saturday's game was pushed back 3 1/2 hours to 5:30 p.m. EST because, well, every little bit helps.

BYU is currently 13th in the College Football Playoff rankings. That is not only way too far back to be considered a playoff contender, it also means star quarterback Zach Wilson and the Cougars need to climb at least a couple spots to have a chance to earn a bid to a New York's Six bowl game.

An appearance in the Fiesta or Cotton bowls would be worth $4 million to BYU. If the Cougars can't crack the top tier of postseason games, it would likely mean no highly ranked opponent and a fraction of the payout.

Coastal Carolina is No. 18 in the CFP, even farther out of range for a major bowl bid — though the Chants have two paths. They could work their way into the top 10 or so and pick up an at-large bid. They could also earn a spot as the highest ranked conference champion from outside the Power Five leagues, though they would probably need some help in the form of a loss or two by No. 7 Cincinnati from the American Athletic Conference.

Coastal has already clinched a spot in the Sun Belt title game on Dec. 19 against No. 20 Louisiana-Lafayette.

For college sports fans, this game probably feels like a Bracket Buster, those made-for-TV matchups of mid-major basketball teams looking to improve their March Madness resumes.

That kind of scheduling flexibility is unheard of in college football, where nonconference games are usually set years in advance. In the spring of 2019, Clemson and Oklahoma announced a home-and-home series for 2035 and '36.

But there has been nothing typical about 2020.

“It's exciting. And it's fun,” BYU offensive lineman James Empey said. "Everybody's just kind of been riding the wave and trying to prepare the most they can.”