Players go from filling out NCAA brackets to filling them 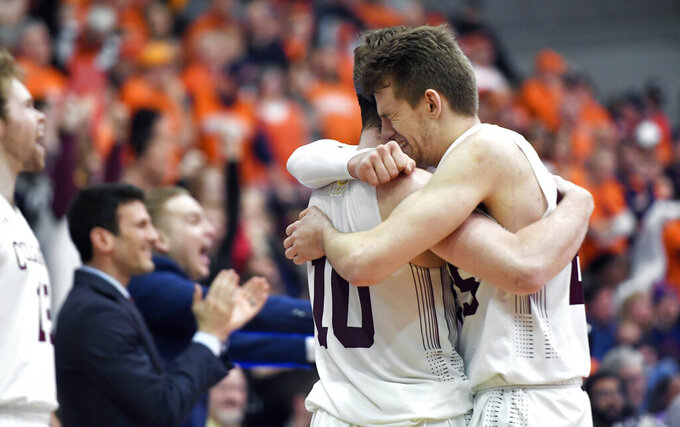 COLUMBUS, Ohio (AP) — Rapolas Ivanauskas looked forward to filling out his NCAA Tournament bracket every March, competing with his brother to see who had the better feel for college basketball's showcase.

Which team to pick? Duke or North Carolina? Kansas or Kentucky?

The Colgate forward-to-be made his best guesses — and finished second.

"I remember making all these brackets, and my little brother would always beat me," the Patriot League's player of the year said Thursday. "Just picking out random teams, he would always get all the upsets."

Many of the 1,000 players on NCAA Tournament teams know what it's like to be on the pencil end of a bracket, trying to pick the most probable upsets. Which No. 13 seed might have that one game in them? Which Power Five team is on the decline heading into the tip-off?

Now they're on the other side. Instead of guessing how the brackets will turn out, they're actually filling them out, which is quite a switch.

"Didn't make a bracket, but I've got two brothers," Colgate sophomore Jordan Burns said. "They both picked us to win the national championship."

His two brothers are in a minority. Colgate (24-10) is a long shot when it plays Tennessee (29-5) on Friday in the South Region. Only 2.1 percent of those who filled out brackets on Yahoo Sports' bracket competition think the Raiders are capable of the big upset. Tennessee is a 17-point favorite in its first-round game.

And now, Ivanauskas — who was born in Lithuania and grew up in Barrington, Illinois — gets to put his fingerprints on an NCAA bracket.

"Obviously, I didn't make a bracket, but just being here, it's such a surreal experience," he said, "knowing that you've got other kids watching our games on national TV and other kids that are like me."

While picking the upsets is fun, being on the other end of one on the court is another thing. Two of the other South Region teams in Columbus know it's unforgettable.

Tennessee was a No. 3 seed last year when 11th-seeded Loyola of Chicago got a beneficial bounce. Clayton Custer's jumper hit the rim and backboard before falling with 3.6 seconds left for a 63-62 win that sent Sister Jean to the Sweet 16.

Tennessee, a No. 2 seed this time, has that moment fresh in mind.

"Just a lot of pain, a lot of regret from that last game," guard Jordan Bone said. "I feel like this team still feels that."

So does No. 7 seed Cincinnati, which had one of the biggest NCAA Tournament meltdowns last year in the second round. Up by 22 points with 11 minutes left, the Bearcats went cold and Nevada pulled out a 75-73 win. Cincinnati failed to get off a final shot and ended up matching the second-biggest blown lead in NCAA Tournament history.

It was one of the biggest upsets last year, trailing UMBC's win over No. 1 Virginia — the first time a No. 16 seed had pulled off such a victory.

"These games — that's why it's called March Madness," Cincinnati coach Mick Cronin said. "Why it's the greatest event in sports in the world because anything can happen, whether it's UMBC or what happened to us last year."

Cincinnati (28-6) plays Iowa (22-11) on Friday, followed by the Colgate-Tennessee matchup. At least the Raiders know they're favored in some of those brackets out there.

"I'm sure my son, Luke, filled out his bracket and hopefully he has Colgate winning at least a game or two," coach Matt Langel said.

Nine-year-old Luke Langel watched a lot of the conference tournament games and provided insights to help his father, including some tips after watching Tennessee's loss to Auburn in the SEC Tournament.

"After Tennessee lost, he said, 'Dad, we may play Tennessee, here's what we should do: Don't let any of their three leading scorers ever touch the ball and we'll be good,'" Langel said. "So for everybody out there, that's our game plan."