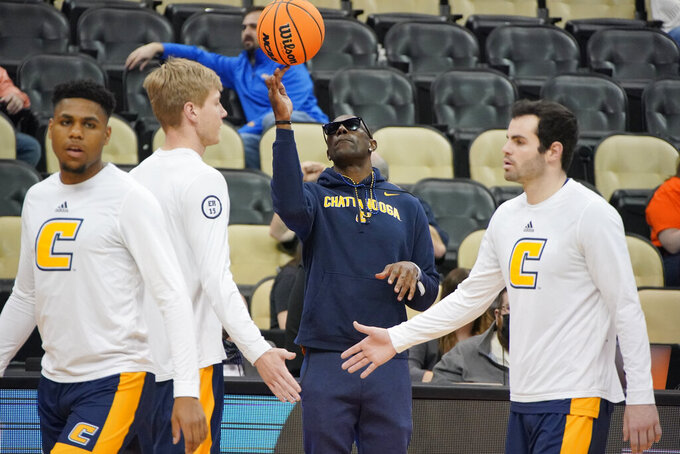 Pro Football Hall of Fame wide receiver Terrell Owens, center, twirls a basketball on his finger as he watches Chattanooga warm up before a college basketball game against Illinois in the first round of the NCAA tournament in Pittsburgh, Friday, March 18, 2022. (AP Photo/Gene J. Puskar) 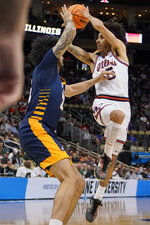 The Southern Conference champion Mocs, with alum and Pro Football Hall of Famer Terrell Owens cheering them on, smothered Illini All-America center Kofi Cockburn. They took double-digit leads in each half. They responded every time the Illini made a push.

The Illini didn't panic. They dug in behind Cockburn and guard Alfonso Plummer, whose go-ahead free throws with 12 seconds to go helped them pull out a 54-53 NCAA Tournament win that maybe they didn't deserve but will certainly take.

“I told (Chattanooga coach) Lamont (Paris) they played better than us, and we just happened to have more points than them at the end, and we led at the right time,” Underwood said.

The only time it mattered.

The Big Ten co-champions will play fifth-seeded Houston on Sunday after narrowly avoiding becoming the seventh team to fall to a double-digit seed.

“We just kind of hung in there,” Underwood said.

Plummer scored 13 of his 15 points in the second half, including three 3-pointers that kept Illinois (23-9) within striking distance. The 7-foot Cockburn, fending off bodies left and right, finished with 17 points and 13 rebounds while absorbing 11 fouls. His putback with 45 seconds left gave the Illini the first of just two leads they held all night.

“It wasn’t frustrating,” Cockburn said. “I’ve been going through that all year. Probably all my whole career. I think it was just another challenge. This is the NCAA Tournament, and things get tough.”

Chattanooga still had two chances to pick up its first NCAA Tournament win since 1997 in the closing seconds but sophomore star Malachi Smith missed twice. His runner with 4 seconds left was blocked by Coleman Hawkins. Smith chased down the rebound and pulled up from about 12 feet, but the ball clanged off the rim and into Hawkins' hands, capping a 4 for 20 performance for the Southern Conference Player of the Year.

“My mindset was, I just got fouled the last possession, so I tried to do it again, and just going too fast,” Smith said. “And then luckily got the rebound, and then got a shot that I felt like if you’re gonna get a shot for the win, that’s a shot you’ll take.”

Unlike the Mocs' overtime thriller in the Southern Conference final — which ended with a game-winning 30-foot heave by David Jean-Baptiste — this time there would be no last-second heroics.

“And it’s frustrating because it's a shot I work on a lot, and it didn’t go in,” Smith said. “And that’s all I can say. I just let my teammates down, and I just missed a shot that I usually make.”

Illinois didn't exactly light it up either. Senior Trent Frazer missed all six of his shots but did make two free throws with 3:37 to go. Andre Curbelo was 1 for 7. The Illini made just 3 of 17 3-pointers, turned it over 14 times — including a couple of baffling passes to nowhere that sailed out of bounds — and survived anyway.

“You’re relieved, you’re encouraged,” Underwood said. “And, again, I’ve been in this thing enough to know it’s literally just every game is gonna be close, and there (are) very few blowouts, and it’s ‘Survive and advance.’ And literally, you take them any way you can get them.”

Paris promised to throw multiple bodies at Cockburn in an effort to keep the 7-footer in check. It worked early, as the Mocs harassed him nearly every time down the floor.

It led to a lot of pushing, a lot of shoving and — for a while — a lot of fouls. Josh Ayeni and Silvio De Sousa each drew three whistles in the first half alone. Cockburn struggled to take advantage, missing 5 of 8 free throws early before he and the Illini started to get into a rhythm after the Mocs were forced to go small.

"He got a couple (of) easy ones, but I think for the most part, he earned a lot of the stuff that he got," Paris said of Cockburn. “And he’s a good player.”