Police: UConn player who fled crash had odor of alcohol 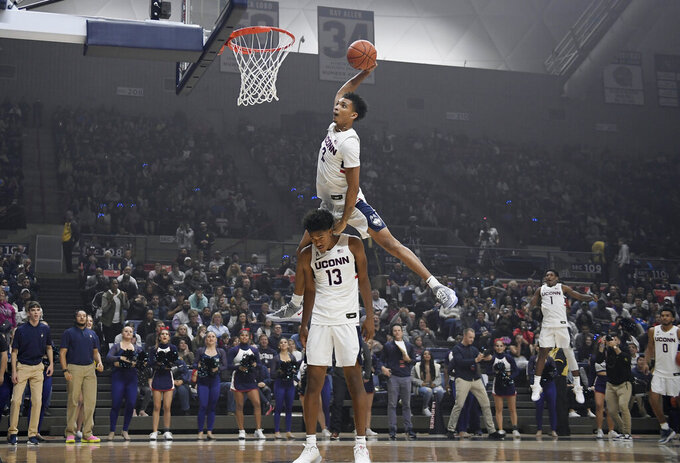 STORRS, Conn. (AP) — The UConn basketball player facing charges after fleeing from a car accident smelled of alcohol at the time of the crash, according to an arrest warrant affidavit released Wednesday.

Freshman guard James Bouknight was charged this week with evading responsibility, interfering with a police officer, traveling too fast for conditions and operation of a motor vehicle without a license after police say he crashed a car into a street sign near campus then ran from the scene at about 1:30 a.m. Sept. 27.

According to a redacted arrest warrant affidavit released Wednesday, the officer responding to the accident had noted "an odor of alcoholic beverage emitting from Bouknight." He said the player told him he didn't have identification, tried to restart the car and eventually fled on foot when asked again for ID.

The car's owner, whose name was redacted, initially told police that about 20 people were in her apartment the night of the accident and her keys had been taken from a counter without permission.

She amended her statement Oct. 13 to say she had been drunk, does not remember giving Bouknight permission to drive the car, but does not want to pursue theft charges.

The 19-year-old Bouknight turned himself into police Oct. 3 and gave a statement acknowledging his responsibility for the crash and saying he had been given permission to drive the car.

He is scheduled to appear in court Oct. 29.

UConn coach Dan Hurley said Tuesday that he learned of the incident the day after it happened and that Bouknight faces punishment within the program. He said he has not determined if the player will be suspended from any games.

"In the end, the biggest punishment or biggest fallout is going to be the damage to his reputation, the shame, the embarrassment that he has caused himself, his family, the program, his teammates, the university, all of us here," Hurley told reporters at practice Tuesday. "That's the shame and embarrassment of this whole thing."

Bouknight issued a statement Tuesday apologizing and calling his actions irresponsible and foolish.

"But I intend to use this experience to learn from my mistakes and make better life decisions going forward," he said.

A spokesman said the school had no further comment Wednesday following the release of the affidavit.