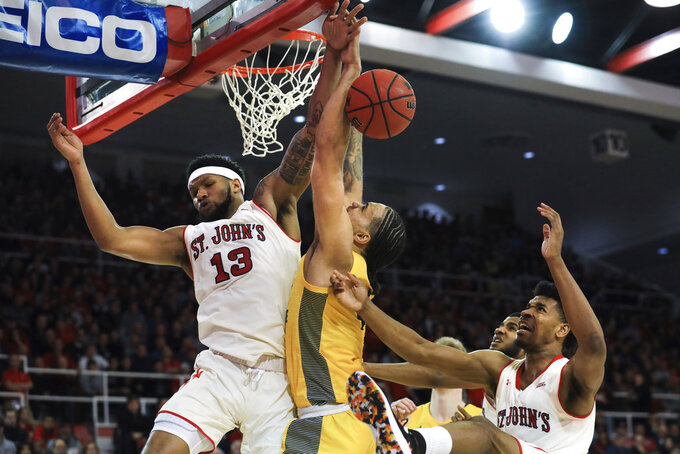 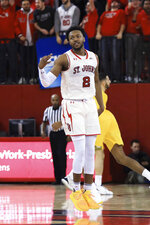 NEW YORK (AP) — The best player in the building was Shamorie Ponds — by far.

Ponds scored 20 of his 26 points in the first half, dominating a matchup between two of the nation's top guards, and St. John's rebounded impressively from its first loss by routing No. 16 Marquette 89-69 on Tuesday night.

Marvin Clark II had 22 points for the Red Storm (13-1, 1-1 Big East), who snapped Marquette's eight-game winning streak with an eye-opening performance on campus at Carnesecca Arena. Mustapha Heron scored 16, all after halftime, as every St. John's starter reached double figures.

"Offensively, they're a juggernaut," Marquette coach Steve Wojciechowski said. "You're looking at one of the top 20 teams in the country."

With leading scorer Markus Howard held to a season-low eight points on 2-for-15 shooting, the Golden Eagles (11-3, 0-1) got blown out in their conference opener. Howard entered averaging 25.1 points per game, best in the Big East and ranked fifth in the nation.

The anticipated matchup between Howard and Ponds was no contest from the start. Ponds came out sizzling and scored eight points in the first 2:37, matching his total on 2-for-13 shooting in Saturday night's excruciating loss at Seton Hall.

The 6-foot-1 junior from Brooklyn, the Big East preseason player of the year, then scored the final nine points of the first half for the Red Storm, including a long 3 that gave them a 39-31 lead at the break.

"We needed to bounce back from last game, not only individually, but as a team," Ponds said.

It was reminiscent of last February, when Ponds set an arena record with 44 points in an 86-78 win over Marquette.

This time, the left-hander finished 8 for 15 from the field, including 4 of 7 on 3s. He added seven rebounds, five assists and two steals in the Red Storm's most lopsided victory over a ranked opponent since beating No. 20 Pittsburgh by 21 points in December 1998.

Meanwhile, the 5-foot-11 Howard went 1 for 10 in the first half and never got going. He was whistled for four fouls in 26 minutes.

"I feel like we keyed on him. We know he likes to take a lot of 3s, so we tried to limit them and the transition points," Ponds said.

Marquette: Picked second in the Big East preseason poll, the Golden Eagles have quality non-conference wins over Louisville, Kansas State, Wisconsin and Buffalo that moved them up the national rankings. But away from home, they've lost by wide margins to Indiana, Kansas and now St. John's.

"There's no question we have to show much better toughness and execution on the road," Wojciechowski said.

St. John's: Picked fourth in the Big East preseason poll, the Red Storm are targeting their first NCAA Tournament appearance in four seasons under Mullin. They opened 12-0 against a soft non-conference schedule for the school's best start since winning its first 14 games in 1982-83, Mullin's sophomore year. The run ended at Seton Hall in the league opener. But dating back to last season, St. John's has won its past three regular-season games against ranked opponents.

"We feel like we have a good enough team to beat anybody," Mullin said.

St. John's led by 10 with 6:20 left at Seton Hall and had several chances to close it out, but got stagnant on offense and lost 76-74 on a 3-pointer by Shavar Reynolds with less than a second remaining.

A steal by the Red Storm that could have sealed it in the waning seconds was negated when an official blew his whistle, believing the clock had not started on an inbounds play. Two days later, the Big East released a statement saying the official made an error in judgment that was not correctable.

Late in Tuesday's game, in a crowd that included tennis great John McEnroe sitting courtside, St. John's students who chanted "Over-rated!" at Marquette during the second half showered their own team with cheers of "Undefeated! Undefeated!"

"I believe that we finally have gelled as a team," Clark said. "We have some talented guys on our team. When we are playing together and sharing the ball, it's really hard to stop us."

"They create a lot of headaches on defense," Wojciechowski said. "They're going to win a ton of games."

St. John's: At old rival Georgetown on Saturday, when Mullin squares off against Hoyas coach Patrick Ewing once again in a story line that dates back to their Big East and NBA playing days. St. John's has lost 13 in a row at Georgetown since a victory on Jan. 18, 2003.