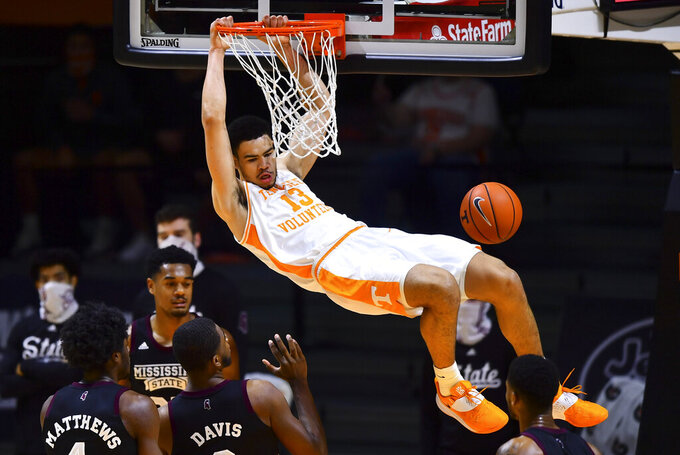 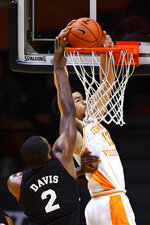 KNOXVILLE, Tenn. (AP) — Even on a miserable shooting night, Tennessee coach Rick Barnes is convinced the shots will fall sooner or later.

The 18th-ranked Volunteers hit just 37% of their shots from the field — and 16% from 3-point — but still came away with a 56-53 win over Mississippi State Tuesday night.

“If our guys are taking good shots, I can't be concerned with how we're shooting,” Barnes said. “The thing is: Can you win when you're not making shots?”

Yves Pons scored 13 points to lead the Tennessee (11-3, 5-3 Southeastern Conference) victory. He was a critical force in the first half for the Vols, then hit a pair of shots late in the second half when the Bulldogs (9-8, 4-5), who managed to shoot 33%, had the game tied.

In the final 2:30 of the game, with Pons fouled out, it was freshman Keon Johnson who scored four of his eight points, while taking an important charging foul, to seal the victory for Tennessee.

“I told our guys before the game, ‘I don’t care how you get it done, but you've gotta get it done,'” said Barnes.

Mississippi State was led by Iverson Molinar with 16 points and D.J. Stewart with 11. Abdul Ado had 12 rebounds and Quinten Post pulled down 10 as the Bulldogs dominated the boards, 42-30.

The Bulldogs had just three baskets in the game's final 12 minutes.

“We just couldn't get that one big shot when we needed it,” said Mississippi State coach Ben Howland. “We've played our best team defense in the last two games (losses to SEC title contenders Alabama and Tennessee). We had a chance to win them both on the road.”

After leading by three at halftime, Tennessee struggled to weather Mississippi State's second half rally. Midway through the second half, the Bulldogs went ahead on an inside basket from Ado, 41-38. The lead didn't last long as Pons answered with a pair of baskets.

Tennessee's 26-23 halftime lead was the product of an early spurt by the Vols.

Then, in the final 10 minutes of the first half, the Vols managed just two field goals.

Stewart led the Bulldogs' recovery, scoring nine points. Mississippi State tied the game at 20 with just over 5 minutes to play when Ado scored from down low.

Three free throws by Tennessee freshman Jaden Springer, who was back after missing the last two games with an ankle injury, then a 3-pointer by Santiago Vescovi gave the Vols some breathing room.

Tennessee grad student John Fulkerson, a necessary inside presence for the Vols, has struggled lately.

“(Fulkerson) has to adjust his game,” Barnes said. “(He) can play with more force. Some way, somehow, we have to get him going.”

Mississippi State: Quality SEC victories over Missouri and Florida have helped the Bulldogs with credibility around the league. How that plays out in the homestretch of the regular season will be interesting.

Tennessee: Finding a way to stop the bleeding and finding the swagger they had earlier in the season is paramount for the Vols. Getting freshman Jaden Springer (ankle) healthy and back in the lineup will go a long way toward doing that.

Mississippi State: The Bulldogs will leave the grind of the conference campaign to be part of the SEC/Big 12 Challenge. They will entertain Iowa State Saturday.

Tennessee: Two weeks ago, it would have been a Top 10 matchup between the Vols and Kansas. However, Tennessee suffered a couple setbacks and the Jayhawks have lost three in a row, taking the luster off Saturday's game in Knoxville.