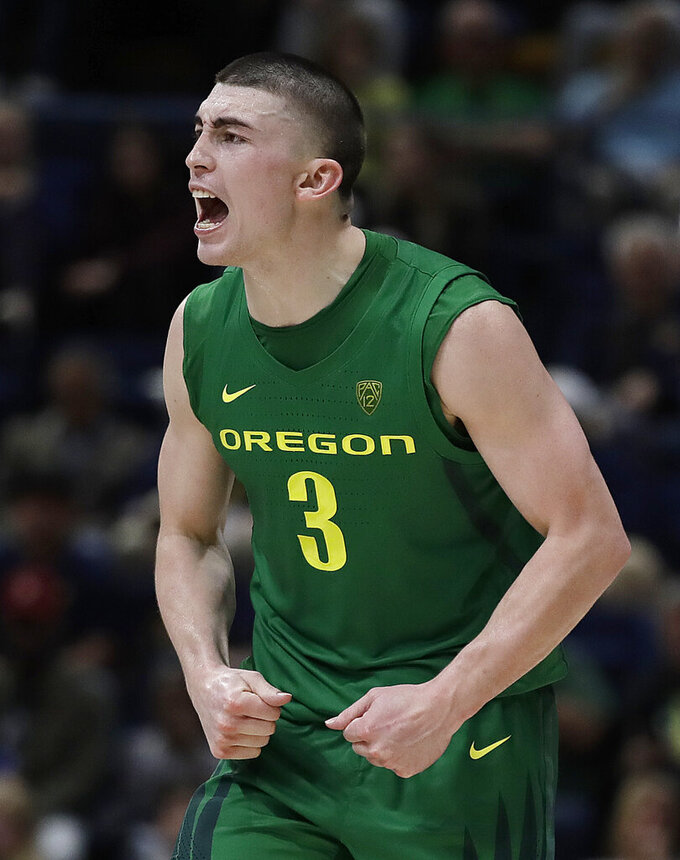 Oregon's Payton Pritchard celebrates after scoring against California in the second half of an NCAA college basketball game Thursday, Jan. 30, 2020, in Berkeley, Calif. (AP Photo/Ben Margot)

Pritchard had resolutely picked up the Ducks and carried them to a Pac-12 tournament championship and on to a run in the NCAA Tournament.

In the end, Pritchard said he learned a lot from the process, but he needed to work on his game before a move to the NBA.

If there’s one thing that Pritchard is keenly aware of, it’s his game. A self-professed gym rat, the senior point guard is unfailingly focused on his performance.

"You know, really for me, it was just about being consistent. How I finished the last 10 games last year, teams want to see that on a consistent basis and that it's not just like a fluke,” he said. “That's why I came back. I want to show that I can bring that, game in, game out.”

Although No. 17 Oregon has dropped its last two games to fall three spots in the AP rankings, the Ducks get five of their last seven games at home. And they’re still sitting at second in the Pac-12 standings behind No. 16 Colorado.

The Ducks host the Buffaloes on Thursday night.

Pritchard is averaging 19.5 points, 4.9 rebounds and 5.3 assists. He started the week as the only player in the nation to lead his conference in both points and assists.

Along with developing consistency, Pritchard has been racking up the records.

Earlier this season he became the first player in Pac-12 history to reach 1,700 career points, 600 career assists and 500 career rebounds.

He already has Oregon records for assists (630) wins (99) and starts (133). He needs 12 more steals and eight more games to top those categories in Eugene.

"When I'm playing I'm not looking at all these specific stats, or all that. It's something when I get older I'll probably look at and think, `Wow, that's crazy.' But you know, records were meant to be broken, so I just feel fortunate enough to be part of a good program that's allowed me to play my game and be able to do these things," he said.

This season has been especially meaningful for Pritchard because of teammate Anthony Mathis, a graduate transfer from New Mexico. Pritchard and Mathis were teammates at West Linn High School outside of Portland but the connection between the two is deeper.

Mathis stayed with the Pritchard family during high school when his mother moved to Wyoming. Together, Mathis and Pritchard won three state titles at West Linn.

Pritchard refers to Mathis as his brother.

“Man, I can't describe it. It's the best feeling. To have your brother back, and finish you last year of college with each other. You can't ask for anything better,” Pritchard said. “Hopefully we can do something special to finish out our college careers."

For Pritchard, something special means building on the success the Ducks had last season. After winning the Pac-12 tournament championship — Pritchard was named tournament MVP — the No. 12-seeded Ducks embarked on the NCAA Tournament, upsetting No. 21 Wisconsin, the fifth seed.

Oregon got another win over UC Irvine before the run came to a close in the Sweet 16 against top seed Virginia.

“To watch Payton grow over four years, he was our point guard on our Final Four team, and last year really exploded to take us to the Sweet 16. He's a talented young man that's driven. He works very hard at his game,” coach Dana Altman said earlier this season. “You love players like that. You love players in your program like that, where it's all about the team winning. He wants to play well. He wants to do well for himself, but the most important thing is winning ballgames and leading his team.”

Last month when the Ducks played at rival Washington, Pritchard sank a 3-pointer to win it in OT. Afterward, in a show of bravado, he circled the court yelling, "My city! My city!” Pritchard will finish his four years at Oregon without a loss in Seattle.

And it wasn't just the late-game heroics against the Huskies. Pritchard similarly took over in an overtime victory over Michigan in Ann Arbor.

“He’s an exceptional player,” Washington coach Mike Hopkins said, suggesting Pritchard should be a national player of the year candidate. “He was the No. 1 thing on our scouting report.”

Asked to reflect on what he hopes his legacy at Oregon will be, Pritchard didn't hesitate.

“Being a winner,” he said. “And one of the hardest workers they’ve ever seen.”