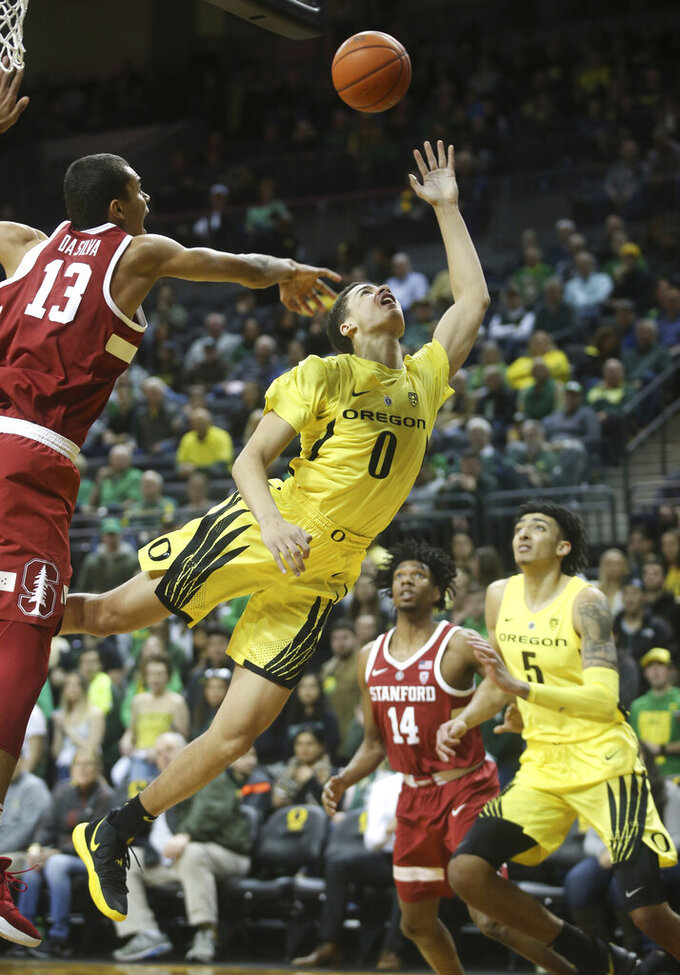 EUGENE, Ore. (AP) — Stanford knew exactly who the masked man was at the center of Oregon's defense.

Yet it still didn't matter, as Kenny Wooten blocked more shots than the Cardinal made for most of the first half.

"We were very clear on who he was and what he did," Stanford coach Jerod Haase said, "but we didn't execute the game plan very well."

Wooten had two blocks in the first 90 seconds and three before Josh Sharma's put-back basket ended an 0-for-13 start for the Cardinal.

"I feel like it definitely changed what they wanted to do," said Wooten, who wears a clear plastic mask to protect a broken jaw he suffered against Baylor in December. "They wanted to penetrate and I feel like after a couple of blocks, they started looking for other ways to score."

That didn't work, either, as Wooten was up to five blocks by the time Oscar da Silva scored on a breakaway dunk to make it 16-4 with 6:28 left in the half.

"Kenny set an unbelievable tone that first 10 minutes and really set the tone for the game," Oregon coach Dana Altman said. "It made them a little hesitant offensively. He really was active and really in great position."

Stanford tied its season low with 46 points and made just 15 of 55 (27.3 percent) from the field, its second-worst shooting performance of the season.

"We struggled making shots but also struggled understanding that taking the ball to the basket and trying to challenge them at the rim wasn't going to work unless we were going up to dunk it," Haase said. "We didn't learn very quickly and it really got us in a hole."

Okpala's only 3-pointer cut the deficit to 38-31 early in the second half, but that's as close as the Cardinal came. Oregon scored the next eight points, including back-to-back 3s by Pritchard and King, to lead by 15,

"We only had two turnovers the second half, which really helped us score 39 points," Altman said, "so I thought there were a lot of positives."

The Cardinal struggled from the opening tip without sophomore point guard Daejon Davis, who was injured Thursday night in a head-to-head collision against Oregon State.

After missing 21 of its first 22 shots, Stanford recovered enough to hit 6 of 9 to end the half with Oregon up 30-20, though neither team had a player with more than five points.

Stanford missed Daejon Davis and his 12.6 points per game most at the outset, and the Cardinal have just three days before their next game. A Stanford official confirmed only that Davis was unavailable because of an injury.

Oregon is now tied with USC for fifth in the Pac-12 with five of its last seven regular-season games on the road, which makes the Ducks' goal of a top-four finish and a bye in the conference tournament in Las Vegas all the more challenging.

Wooten provided most of the high-wire excitement, with the best coming early when he followed his third block with a flying, two-handed jam of a rebound for a 6-0 lead.

Wooten said he went looking for shots to block after swatting three in the first 4 ½ minutes. "At some point I'm just trying to hunt down shots and looking for as many opportunities as I can get," he said. "Today it was working. I got those first three early and after that I just kept hunting."