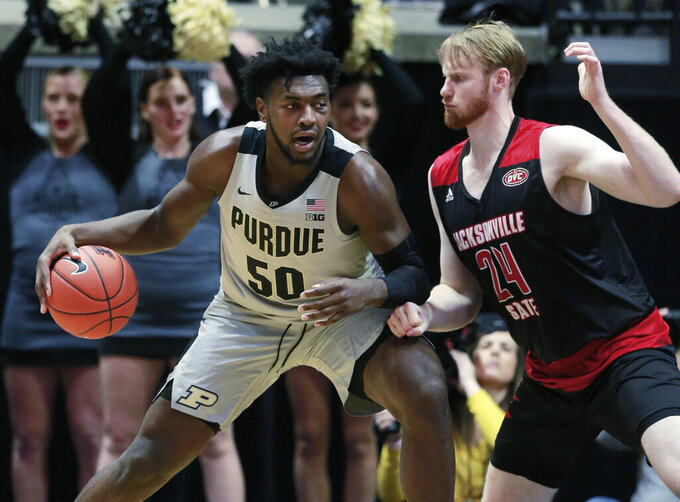 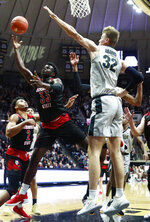 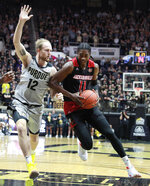 WEST LAFAYETTE, Ind. (AP) — The Purdue basketball team had a week of practice to get some kinks out before Saturday night’s game.

“From an offensive standpoint, just trying to establish an inside presence and getting the ball inside,” Boilermakers coach Matt Painter said. “That’s something we harped on. We go too long periods of time where we don’t throw the ball inside.”

The result was a much-improved performance as 7-foot-3 Matt Haarms scored 17 points and grabbed 10 rebounds to power Purdue to an 81-49 rout of Jacksonville State on Saturday night.

Haarms hit 6 of 10 shots and all five free throws. Overall, Purdue outscored the Gamecocks 34-14 in the paint.

“Guys were really looking for us on the plays we ran early where we specifically try to get it inside.” Haarms said. “What I really noticed was they were looking for us for longer. It’s going to take just being aggressive every time. I can't just like sag off and do what I used to do and be content with that. I’ve got to be willing to step up and willing to ask for the ball longer.”

Jahaad Proctor, a transfer from High Point, scored in double figures for his fifth straight game with 14 points on 6 of 9 shots for the Boilermakers’ balanced attack.

“We’re trying to get him to be aggressive and take shots that come his way,” Painter said.

De’Torrion Ware was high for the Gamecocks (1-3) with 13 points.

The Boilermakers scored the first 10 points of the second half to take a commanding 55-20 lead. The Boilermakers’ largest lead was 39 points with 2:07 remaining.

Purdue shot 69% in the opening half to take 45-20 halftime lead. Jacksonville State shot a paltry 25% in contrast.

The Boilermakers have now won two in a row after losses to Texas and Marquette.

“This is a new team and we have to get to know each other,” junior Nojel Eastern said. “Obviously losing is not the way to do that. We didn’t want those two losses but we allowed that to give us confidence, allowed us to come into practice with more energy."

This was the first meeting between the two teams. The Boilermakers are now 23-0 against current teams in the Ohio Valley Conference.

NOT SO FOUL: One notable improvement was Purdue sank 11 of 14 free throws for 78.6%. Purdue has struggled in first four games hitting a mere 57.9% from the foul line.

Jacksonville State: Gamecocks coach Ray Hunter was denied in his second attempt for his 500th career victory. Hunter’s record is 499-166 in 21st season as coach head coach and fourth with Gamecocks.

Purdue: The game was Purdue’s second victory in Emerald Coast Classic. The next three games should tell Purdue how much progress they have made with at least one and possibly two ranked opponents in the Emerald Coast Classic, followed by a home game with No. 7 Virginia on Dec. 4. The Cavaliers advanced to the Final Four, beating Purdue 80-75 in overtime in March.

“We have four more practices before we play Friday and Saturday,” Painter said. “Obviously, we’ll be a lot lighter on Thursday than the other days. We got to get better here. It’s hard when you play a lot of games because then you have to try make your improvements through competition, which you still can. But in college when you get a chance to practice early in the season, you have to make some strides."

Jacksonville State takes on Chicago State on Friday in the Emerald Classic in Niceville, Florida, before meeting either Alabama State or Chattanooga Saturday. The Boilermakers rolled over Chicago State 93-49 on Nov. 16.

Schedule heats up for Purdue, which will face No. 21 VCU on Friday in the Emerald Coast Classic in Destin, Florida. Purdue will then take on either No. 20 Tennessee or Florida State on Saturday.