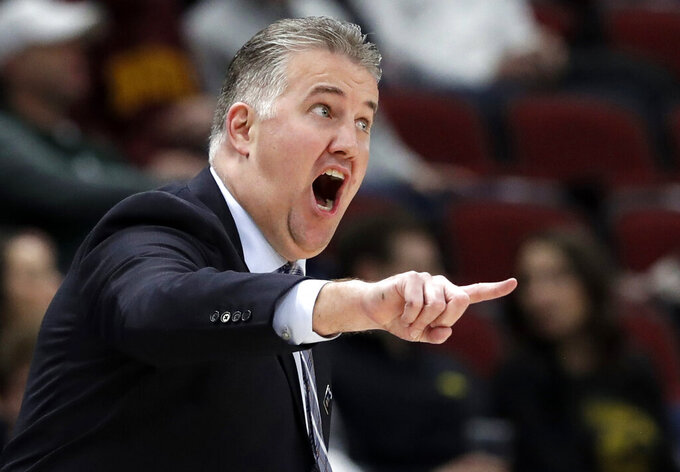 FILE - In this Friday, March 15, 2019, file photo, Purdue head coach Matt Painter directs his top team during the first half of an NCAA college basketball game against Minnesota in the quarterfinals of the Big Ten Conference tournament in Chicago. In a landscape where one-and-done or two-and-done players have become all the rage, Painter has largely ignored the trend by building Purdue’s program with players who expect to stay four years and cherish a degree. (AP Photo/Nam Y. Huh, File)

His best Purdue teams have won with balanced scoring, strong rebounding and solid defense. He captured the 2017 Big Ten title by playing through the post and earned a share of this year's regular-season championship because of a strong backcourt. And in a landscape where leaving early for the NBA has become all the rage, Painter has chiseled out his success with a cast of familiar names and an old-school principles.

His guys win because they stick around and play as a team.

"I would say we've recruited guys who are more skilled, more Purdue-type guys," Painter said Sunday. "When you're piecing a team together, you've got to make sure you get guys who want to win together."

Painter has done as masterful a job of figuring it out as anyone in this year's NCAA Tournament.

After entering the 2018 tourney as a No. 2 seed, carrying the banners of Big Ten regular-season and conference tourney runner-ups and potential Final Four candidate, four Purdue starters graduated — three of them 1,000-point scorers.

Naturally, the revamped Boilermakers struggled early this season, falling to 6-5 after a mid-December loss to Notre Dame.

But just as the critics started counting out Purdue, Painter spent the next two weeks getting back to the boring basics and used a proven design to get back on track. Now they're about to play in the tourney for the fifth straight time as the South Region's No. 3 seed.

"It was really a matter of staying within ourselves and not getting distracted by people saying we weren't going to make the tournament," Nojel Eastern said. "We got better as individuals and as a team."

The sophomore guard epitomizes how this plan works.

Eastern thrives on defense and came to Purdue knowing he would play a small role as a freshman. Now, after logging less than 13 minutes per game in 2017-18, Eastern has become a major part of the turnaround and could become a three-year starter for Painter.

Preseason All-American Carsen Edwards has been through this, too. He spent his first two college seasons learning the system from the four upperclassmen who graduated last year before finally emerging this season as the clear-cut leader and the focal point of defenses. His scoring average of 23.0 points led all Power Five players and puts him in position to break Rick Mount's school scoring record next season, a mark that has stood since 1970.

Edwards understands the NBA generally discounts 6-foot-1 shooting guards, but whether a pro team wants him next season or not, Edwards is content to play his role in West Lafayette.

"I'm going to put this as politely as I can, but I really don't care what anyone thinks," Edwards said. "I know we work and try to be the best we can."

While the experience factor has largely been ignored by many of college basketball's major powers, it's served Purdue just fine.

The Boilermakers replaced more senior starters this season than any of the top 16 overall seeds. Only Duke and Kansas, traditional one-and-done powers, lost more starters.

Yet without all those splashy new recruits stealing the show, the Boilermakers (23-9) still find themselves two wins away from a third consecutive Sweet 16. They open play Thursday in Hartford, Connecticut, against 13th-seeded Old Dominion (26-8). The winner takes on either defending national champion Villanova or Saint Mary's, the West Coast Conference tourney winner.

And the reason for Purdue's staying power is simple: For every Glenn Robinson or Caleb Swanigan who left early over the past couple of decades, dozens of others stayed in school, developed their skills, found a role to play and were happy to pass down their old digs for the good of the next blue-collar class.

"They have to want an education. They have to want to win as a team," Painter said, explaining his recruiting philosophy. "We've had a tough time getting so-called one-and-dones or two-and-dones, but in a kind of a backhanded compliment it helps you in a way because people aren't running out the door after one year or two years. If you're at Duke, you know those guys are leaving. But if you take a guy who stays for two years or three years, you don't know when he leaves and that makes it hard to sign a guy. So for us, it's worked well because we've had some really good four-year guys."