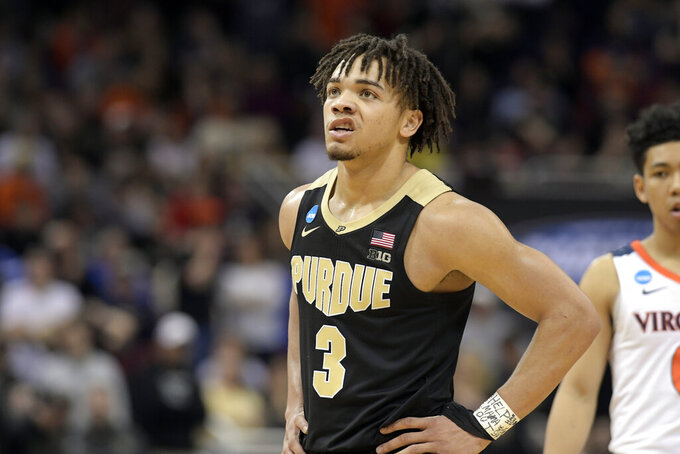 Now he faces the real test — in the NBA.

The 6-foot-1 shooting guard will enter the draft and will hire an agent. He made his announcement Monday on Twitter .

"For as long as I can remember, it has been a dream of mine to play in the NBA. I feel that time is now," Edwards wrote. "This is the beginning of a new journey and I am thankful for everyone's support. And I'm ready for the next chapter in my life."

The college chapter turned out pretty well, too.

He finishes with 1,920 career points — seventh on the school list — 79 points behind Terry Dischinger, who was named to this year's National Collegiate Basketball Hall of Fame class last week.

When he returned to campus, Edwards was the undisputed leader on a team trying to replace three 1,000-point scorers. This season, the ball was in Edwards more often and he showed he could handle the ball and see the floor as well as any point guard.

But his shooting touch is what made him special.

Boilermakers fans watched him develop for three seasons. The rest of the college basketball world took notice in March.

After averaging 24.3 points during the regular season — the most by any Big Ten player since Shawn Respert of Michigan State had 25.6 points in 1994-95 — he was even more impressive in the tournament.

In four games, he scored 34.8 points with a range that seemed to have no bounds as he almost carried the Boilermakers to the Final Four. Purdue lost to top-seeded Virginia in the regional finals.

"Congrats," coach Matt Painter wrote on Twitter. "You deserve this. Excited to watch your future in the NBA."

Scouts may be eager to see how he fares in workouts, too, after witnessing his remarkable performance in the tourney.

But the reward of living out his childhood dream, Edwards believes, is worth it.

"The last three years have been an amazing ride with the best teammates and coaches in the country," Edwards wrote after thanking his parents and reflecting on his religious faith. "I wouldn't trade my time and successes at Purdue for anything."