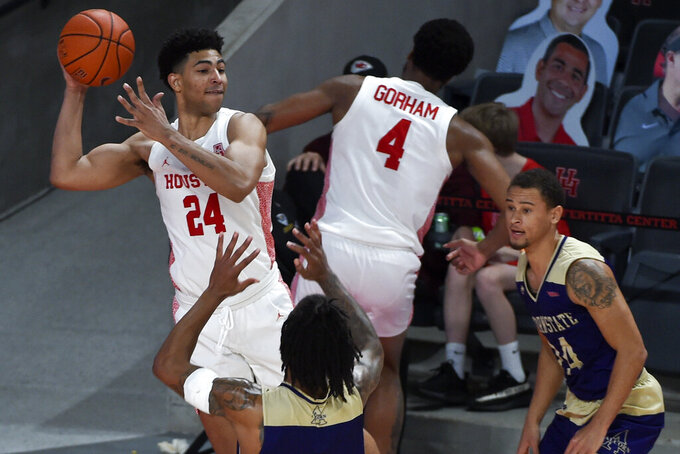 Houston guard Quentin Grimes (24) saves the ball from going out of bounds during the second half of an NCAA college basketball game against Alcorn State, Sunday, Dec. 20, 2020, in Houston. (AP Photo/Eric Christian Smith)

HOUSTON (AP) — Even short-handed, Houston didn’t miss a beat in its first game in 15 days.

Quentin Grimes had 27 points and 10 rebounds, Reggie Chaney added 18 points and six rebounds and No. 6 Houston overcame the absence of several key players to rout Alcorn State 88-55 on Sunday.

“We haven’t played a game since Dec. 5, so we needed this to get our feet wet and get back in the flow of things,” Grimes said.

“I knew we would have eight,” Houston coach Kelvin Sampson said. “We needed to play some games to get some rhythm. We need to get our team back as it’s constructed. Hopefully, we can here pretty soon.”

With Houston set to open conference play Tuesday, Kelvin Sampson said he did not know how many players he would have available.

“When you test, you’re at the mercy of the results of the test,” Sampson said. “We’ll test tomorrow, which is Monday and play Tuesday. You ask me how do I feel about it. Well, ask me when the results get back in because that’s really the only thing you can judge your thoughts on or how you feel is the results of the test. We don’t know whether we are going to have some of our guys, most of them or just a few of them.”

Jamal Shead added 10 points for Houston. The Cougars shot 50% and had a 48-29 rebounding advantage, including 21-10 on the offensive boards. Houston turned that into a 23-8 edge in second-chance points.

“We practiced with six guys all week,” said forward Justin Gorham, who had 16 rebounds. “Six guys were only available. Coach told us that it was going to be different, but we were built for it because we’ve faced adversity every day. It wasn’t anything we couldn’t do. We just had to face adversity and overcome it.”

“Excited to see us compete for 40 minutes,” Alcorn coach Landon Bussie said. “I believe we are going to be competitive moving forward. We need to become a better rebounding team.”

The Cougars opened up a 20-4 lead on a layup by Justin Gorham with 8:44 remaining in the first half. Shead had seven points to lead Houston in the game-opening run.

After Alcorn opened the second half with an 11-4 spurt to close within 10 on a free throw by Crosby with 15 minutes remaining, the Cougars responded with a 10-1 run to push the lead to 49-30 on a three-point play by Shead with 11:18 remaining.

Alcorn State: The Braves hadn’t played since a season-opening 99-50 loss to UAB on Nov. 25 and had their last six games canceled. Alcorn, which never led, got off to a slow start, shooting 30% with 12 turnovers in the first half. The Braves were 16 for 27 on free throws.

Houston: The Cougars used their physicality and strength down low and attacked the paint consistently. Houston had a 42-8 advantage in points in the paint. The Cougars were 16 for 28 on free throws.

“We’re just going through something we’ve never gone through before. This is December. I’ve seen 30-something Decembers. I’ve never seen this kind of December.” – Kelvin Sampson on Houston’s month due to COVID-19.

Alcorn State: At Liberty on Tuesday.

Houston: Hosts Temple in its AAC opener on Tuesday.