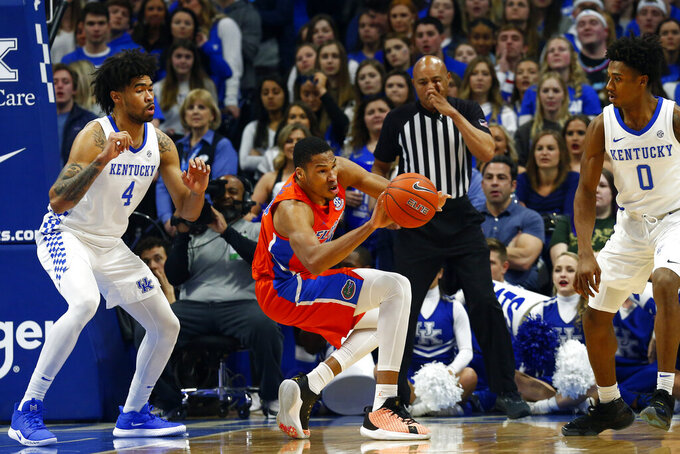 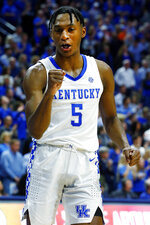 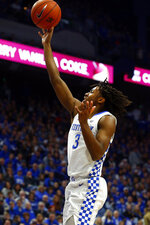 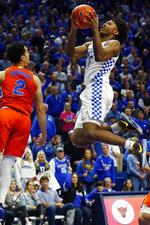 LEXINGTON, Ky. (AP) — John Calipari praised Immanuel Quickley’s basketball savvy, but only after the Kentucky coach and an assistant first challenged the guard to shoot the ball — or else.

“I said, ‘If you don’t shoot open shots, I'm putting Johnny (Juzang) in because I know he will shoot every shot,” Calipari said.

Quickley got the message and responded with a career game that helped the No. 10 Wildcats earn another hard-fought victory.

He scored a career-high 26 points, including 15 of Kentucky’s 17 during a decisive second-half stretch as the 10th-ranked Wildcats pushed past Florida 65-59 on Saturday night for their sixth consecutive win.

Kentucky's leading scorer is on a 16-game run of double-digit scoring performances. Nonetheless, Quickley has taken some ribbing for failing to crack 25 points like teammates Nick Richards and Maxey. Against Florida, he was all but threatened to shoot instead of passing, as he did with open looks in the first half.

“I don't want to say who it was, but one of the coaches yelled at me with some pretty choice words," Quickley said. "For lack of a better term, he said, ‘You need to score.’ So, that kind of got me.

“I didn't think I was dribbling to pass, I thought I was just making plays. But it happens sometimes, coaches see one thing and a player sees another.”

A Rupp Arena crowd of 20,489 — including former Kentucky star John Wall of the Washington Wizards — eventually saw bigger things for Quickley, with fans chanting “MVP! MVP!” at him. He is building a case to be considered for SEC Player of the Year.

“He was the best player on the floor,” Gators coach Mike White said of Quickley. “I thought he did a great job finding space, searching. Hit huge shots, and complemented that with terrific defense on the perimeter.”

Keyontae Johnson had 19 points and Kerry Blackshear Jr. scored 18 for the Gators, who had won their previous three games and five of six.

A back-and-forth game featuring 11 lead changes and 10 ties swung Kentucky’s way midway through the second half thanks to Quickley, who knocked down three consecutive 3-pointers for a 50-44 lead with 11:20 remaining. The sophomore guard’s 3 with 1:34 left provided an eight-point cushion.

But Florida rallied within 61-59 on Scottie Lewis' tip of his missed free throw with 19 seconds left.

Maxey converted a 1-and-1, and Ashton Hagans made a steal that led to Quickley adding two free thows with 1.9 seconds left.

Hagans didn't start after injuring his leg at LSU but entered the game early and finished with seven points, four assists and six turnovers in 34 minutes.

“It was dangerous what I did with Ashton because if he got hit right on that spot, he's probably out three games,” Calipari said. “Not real smart. But he said, 'I can do this, I'll play.'"

Blackshear visited Kentucky last summer before eventually transferring to Florida, and Wildcats fans let him know with boos every time he touched the ball. He shot 6 of 14 and 2 of 6 from deep and helped keep Florida in the game.

Florida: Blackshear’s perimeter shooting and Johnson’s work inside helped the Gators early. After taking their last lead at 44-41, the Gators made one of their next 11 from the field and struggled to stop Quickley. They were also outscored 36-26 in the paint.

Kentucky: A strong inside presence helped keep the Wildcats within range until Quickley caught fire. Two three-point plays got him started before his string of 3s made the difference in a game where every possession mattered.

Florida hosts LSU on Wednesday night, aiming to avenge an 84-82 loss to the Tigers on Jan. 21.

Kentucky visits Texas A&M on Tuesday night in the lone regular season matchup with the Aggies.