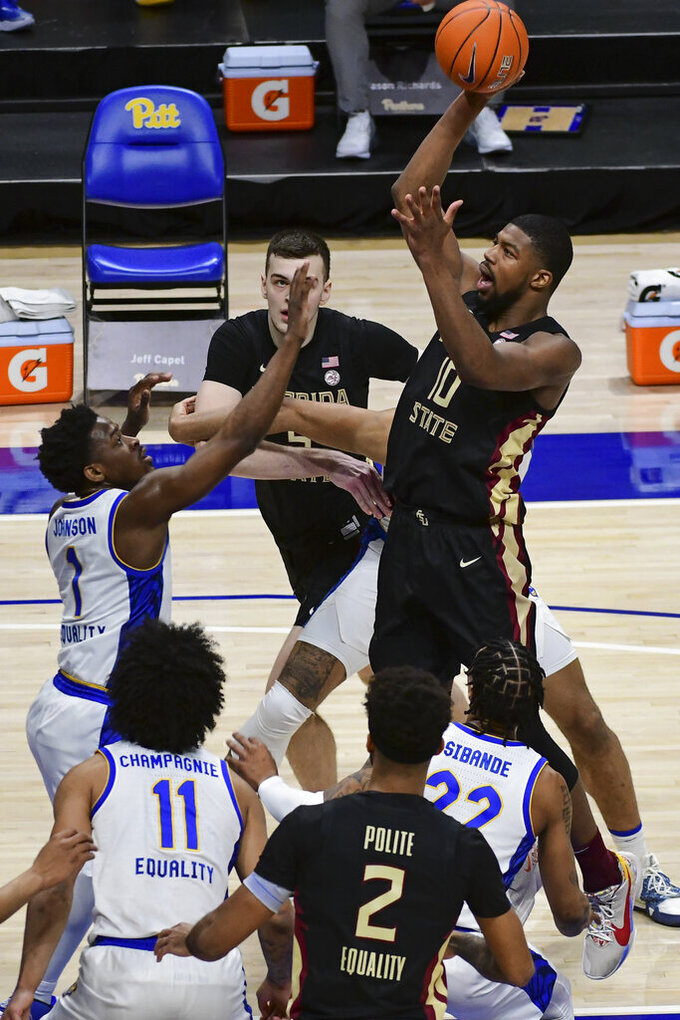 Florida State forward Malik Osborne goes up for a shot against Pittsburgh during the first half of an NCAA college basketball game, Saturday, Feb. 20, 2021, in Pittsburgh. (AP Photo/Fred Vuich) 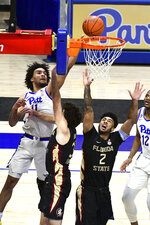 Raiquan Gray had 16 points and eight rebounds, and the 16th-ranked Seminoles beat Pittsburgh 79-72 on Saturday for their third straight win.

Florida State (13-3, 9-2 ACC) led for more than 35 minutes, but never by more than 11 points. Malik Osborne had 12 points and a team-high nine rebounds. RayQuan Evans also scored 12 points, and Scottie Barnes had 11.

Pitt (9-9, 5-8) was able to shut down Walker, who finished 0 for 5 with no points, but Florida State's depth was too much for the Panthers. Nine Florida State players scored four points or more. Walker remains seven points away from 1,000 for his career.

“It really represents who we are as a basketball team to keep winning games by committee,” Florida State coach Leonard Hamilton said.

Pitt (9-9, 5-8) shot 38.2% from the floor as Florida State used its size advantage and reserves to wear down the Panthers on both ends of the court.

“That’s what they do,” Pitt coach Jeff Capel said. “Florida State comes at you in waves. They are a very good basketball team. We fought for 40 minutes.”

The Panthers were able to close the margin to four points in the game’s final minute after a Xavier Johnson jumper. Evans made five free throws down the stretch to help secure the victory.

“They were very well prepared,” Hamilton said. “They didn’t let us get any separation. At the end of the day, I thought we got the stops we had to when the game was on the line.”

ACC leading scorer and rebounder Justin Champagnie had 21 points and 10 boards for the Panthers in his 11th double-double of the season. Johnson added 15 points.

Florida State appears to be rounding into form at the right time. It has won eight of nine overall, including an 81-60 victory over No. 7 Virginia on Monday.

“I don’t think we’ve come close to reaching our potential,” Hamilton said. “That’s one of the things I like about this team.”

For the second straight season, the Seminoles seem poised to contend deep into March. They won six of their last seven last season to finish as ACC regular-season champions before the remainder of the season was canceled.

“As we keep playing, we’ll get to that point where we need to be to compete for a national championship,” Gray said.

Pitt junior Au’Diese Toney missed the game with an undisclosed injury. Toney is Pitt’s second-leading scorer and rebounder and one of Pitt’s best defenders. Senior Nike Sibande started in his place and scored a season-high 12 points. Capel did not have an update on Toney’s status after the game.

Walker, who averages 13.9 points, was held scoreless for the first time since March 23, 2019. Hamilton said he did not practice in the days leading up to the game while dealing with some “light injuries.”

“Even though he didn’t score a point, I thought his contribution defensively and his leadership on the bench was unbelievable,” Hamilton said.

Florida State continues its three-game road swing at Miami on Wednesday night. The Seminoles beat the Hurricanes 81-59 at home in January.

Pitt’s next scheduled game is Feb. 28 at North Carolina State. The Panthers had been scheduled to host Clemson on Sunday, but that game was postponed after a positive COVID-19 test in the Tigers’ program.