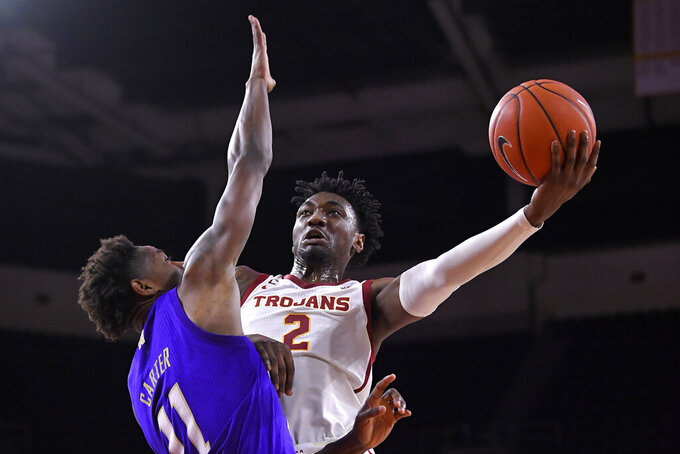 LOS ANGELES (AP) — Nick Rakocevic and Jonah Mathews realize this is their last opportunity to get Southern California back to the NCAA tournament. With the Trojans season showing signs of spiraling out of control, the seniors came up big when needed to on Thursday night.

Rakocevic scored 19 points and Mathews added 16 as the Trojans rallied for a 62-56 victory Washington and snapped a three-game losing streak.

“It's getting real. Every game is important getting to March,” Mathews said as the Trojans are seeking their first NCAA trip in three years.

The Trojans scored the first seven points during the run and held Washington scoreless for 7:10.

“We knew at halftime that we were going to have to win on the defensive end. The game is slower when you play Washington because they play zone,” USC coach Andy Enfield said. “We had to manage our possessions.”

USC extended its lead to 58-48 with 2:47 remaining. The Huskies scored the next five points but could not draw closer.

“Our offense became stagnant in the second half. The focus and rhythm slowed down. There wasn't much movement and we missed easy shots,” Washington coach Mike Hopkins said. “We show flashes of really good and then flashes of what the heck is going on? We need to eliminate those.”

Freshmen Jaden McDaniels and Isaiah Stewart had double-doubles for Washington (12-13, 2-10), which has dropped six straight and nine of its last 10. McDaniels led the way with 19 points and 12 rebounds, while Stewart had a 13-11 night for his 10th double-double of the season, which is second in the conference.

USC was missing freshman Onyeka Okongwu, who is in concussion protocol. The 6-foot-9 freshman is eighth in the Pac-12 in scoring and tied for third in rebounding. They were also without freshman guard Kyle Sturdivant, who is back home in Georgia after his father passed away last week.

The Trojans saw their bench get shorter during the game when guard Ethan Anderson suffered an ankle injury during the second half.

“That’s our brother. We’re always going to be here for him. This win was for him and his family," said Rakocevic of Sturdivant.

DeMar DeRozan, who has gone on to star for the Toronto Raptors and San Antonio Spurs, had his No. 10 retired by USC during halftime.

Washington: After going 34 of 82 on 3-pointers during a three-game stretch in late January and early February, the Huskies are 15 of 55 from beyond the arc in their last two, including 8 of 30 against USC.

Washington: Travels to UCLA on Saturday night. The Bruins won the first meeting 66-64 on Jan. 2 in what was the conference opener for both teams.

USC: Hosts Washington State on Saturday. The Trojans have won seven straight in the series, including a 65-56 victory on Jan. 2.