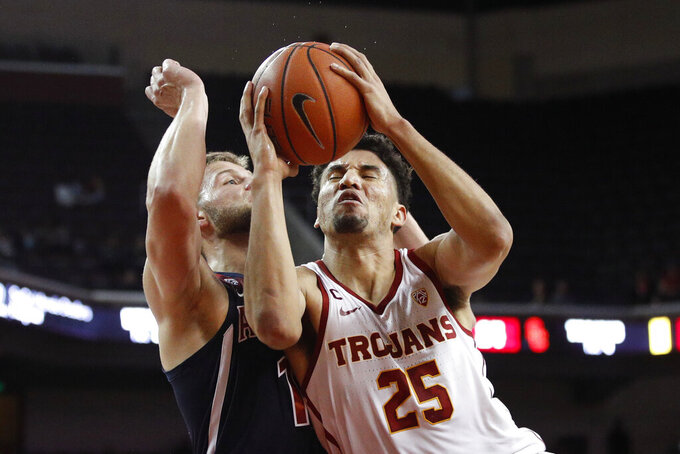 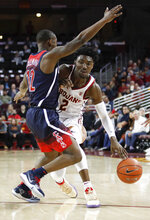 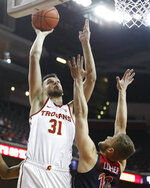 LOS ANGELES (AP) — Nick Rakocevic had not defeated Arizona in his three seasons at USC. He helped put that to rest on Thursday night.

The junior forward tied a career high with 27 points as the Trojans broke a five-game losing streak to the Wildcats with a dominating 80-57 victory. Rakocevic also had 12 rebounds as he recorded his ninth double-double of the season.

"We wanted this win tonight. We knew that if we played defense we would be able to win," said Rakocevic, who was 13 of 17 from the field. "Everybody came out and was focused. Now beating a good team by double digits we really have the momentum going."

Rakocevic is averaging 15.8 points this season but in four conference home games he is scoring 24.5 per game.

"He's playing at a very high level right now," coach Andy Enfield said. "You see him scoring in a variety of ways. He has good hands and is a terrific rebounder."

With Arizona missing junior center Chase Jeter due to a back injury, the Trojans outrebounded the Wildcats by 12 (51-39) and had a 40-28 advantage in points in the paint.

The 23-point victory is the Trojans largest over Arizona in a Pac-12 Conference game.

Enfield credited his team's defense and said it is the first time he can remember that they played zone for all 40 minutes. Arizona (14-6, 5-2) shot 27.8 percent from the field (20 of 72) marking the first time in Sean Miller's 10 seasons the Wildcats have shot less than 30 percent.

"It was working so we stayed in it. They were sliding out to the 3-point line and we were challenging shots," Enfield said.

"I don't think we can take anything away from this. We got killed," Miller said. "We had one of those miserable nights shooting. We weren't able to finish at the rim."

It is the third-biggest loss by Arizona in a conference game under Miller. They lost by 27 to Oregon in 2017 and 24 to California in 2010.

A 3-pointer by Justin Coleman gave Arizona a 5-4 lead when USC went on a 20-5 run over a span of more than eight minutes. The Trojans were 8 of 16 from the field — including three 3-pointers — as Rakocevic and Mathews led the way with six points apiece. The Wildcats were 2 of 10 from the field and committed three turnovers.

USC's lead grew to 36-19 at halftime as it scored seven of the final nine points, including Derryck Thornton's 3-pointer at the buzzer.

Arizona: The Wildcats made 13 3-pointers in last Saturday's win over Oregon State but were 5 of 25 from beyond the arc against the Trojans.

USC: Enfield keeps saying his team plays a lot better when it passes the ball. The Trojans had an assist on eight of their first 10 baskets and finished with 19 assists on 31 field goals.

NICE BACK TO BACK

USC defeated UCLA and Arizona in back-to-back games for only the second time since 1982. The last time the Trojans did it was 2016 when they beat the Wildcats in four overtimes and then defeated the Bruins by 14 points.

Porter gave the Trojans a spark off the bench after he missed the last two games due to a suspension. The freshman guard had three 3-pointers and made one on his first trip down the floor.

"Kevin came in and played in the flow of the offense and defense," Enfield said. "He had a nice game. He needs to continue to improve."

USC senior guard Shaqquan Aaron had a career-high 10 rebounds along with five points and five assists.

Arizona; Travels to UCLA on Saturday.