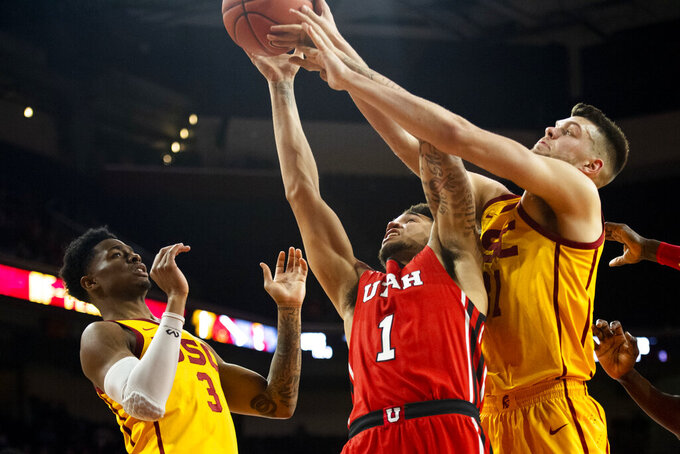 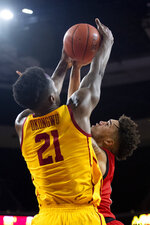 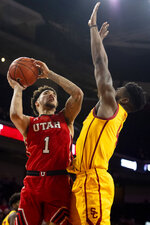 LOS ANGELES (AP) — In a nine-point second-half hole Thursday night, it only appeared as if Southern California had another opponent right where it wanted them.

There seemed to be no panic, no angst and no proverbial button that needed to be pushed in order to get the Trojans going. USC’s dominating second-half run to erase a nine-point deficit came in a 5-minute, 48-second stretch that turned an off night into another signature victory.

Nick Rakocevic scored 16 points with 15 rebounds, Elijah Weaver added 14 points and Southern California rallied for a 56-52 victory over Utah to win for the fourth time in the past five games.

Onyeka Okongwu added 11 points and 11 rebounds, while Jonah Mathews had 13 points, as the Trojans (17-4, 6-2 Pac-12 Conference) rallied from what was once a double-digit deficit for the second time in two home games.

“We’re used to coming back; that’s just our team (identity),” Rakocevic said. “We’ve chipped away at bigger leads before. I’m proud of our guys that we all stuck together and had each other’s backs.”

The Utes appeared in control when an Allen layup with 12:34 remaining gave them a 40-31 advantage. Ho-hum. After all, USC erased a 21-point second-half deficit on Jan. 18 on the way to an overtime victory over Stanford.

The Trojans picked up the intensity Thursday sparked by the defense in a 12-0 run, with seven of the points scored by Weaver. On a night that included tributes to the late Kobe Bryant, Weaver’s own salute was to play as hard as the player he idolized.

“We’re at home and it’s a special day; we’re playing for Kobe,” Weaver said. “It was kind of like, ‘We’re not losing.’ We just kind of came together and let everybody know, ‘Hey, we’ve been here before.’”

Weaver pumped his fist when his fastbreak layup gave USC a 41-40 lead with 7:21 remaining for the Trojans’ first advantage of the game. The Utes went scoreless over a 6:08 stretch as USC rallied.

“We didn’t make enough shots (going) 18 of 55 from the field,” Utah head coach Larry Krystkowiak said. “I was super proud of our guys defensively and we outrebounded them, there was just a little meat left on the bone, I thought.”

Utah did move back on top 52-50 on a layup from Timmy Allen with 1:04 remaining but Mathews made two free throws with 55 seconds remaining to tie the game again at 52-52.

Allen scored 13 points and Branden Carlson added 11 for the Utes (12-8, 3-5), who were coming off a home sweep of Washington and Washington State last week. But Carlson missed two free throws with 42 seconds remaining that would have given the Utes the lead.

“They played great defense, they have a good solid team, but we have to do better on our part, moving the ball, taking open shots and making them,” Carlson said when asked if Utah’s lack of execution or USC’s defense was the difference in the Trojans’ game-changing run.

Utah: After earning Pac-12 Freshman of the Week honors, when he averaged 18.5 points in a pair of victories over the Washington schools last week, Rylan Jones scored 10 points on 2-of-9 shooting with three assists and six turnovers. … Riley Battin also scored 10 points. … Since the Utes joined the Pac-12, they still have an 8-5 record against USC in regular-season conference games only.

USC: The 17 victories on the season top last season’s total. … Okongwu had four blocks and now has 63, second on the Trojans’ all-time list for freshmen to the 69 Taj Gibson had in 2007. … USC was limited to nine assists but improved to 8-4 when held under 17 assists. … The Trojans are 13-0 when holding the opposition under 70 points. USC is also 66-2 in its last 68 games when holding the opposition under 70 and 81-8 in those games under coach Andy Enfield.

On the Trojans bench before the game, there was a USC jersey with a No. 24 for Bryant and a No. 2 jersey for Bryant’s 13-year-old daughter Gianna, who also perished in Sunday’s helicopter crash in nearby Calabasas, Calif. Both jerseys were accompanied by white flowers.

Utah: Will move across Los Angeles and face UCLA on Sunday.

USC: Will remain home and play host to Colorado on Saturday.