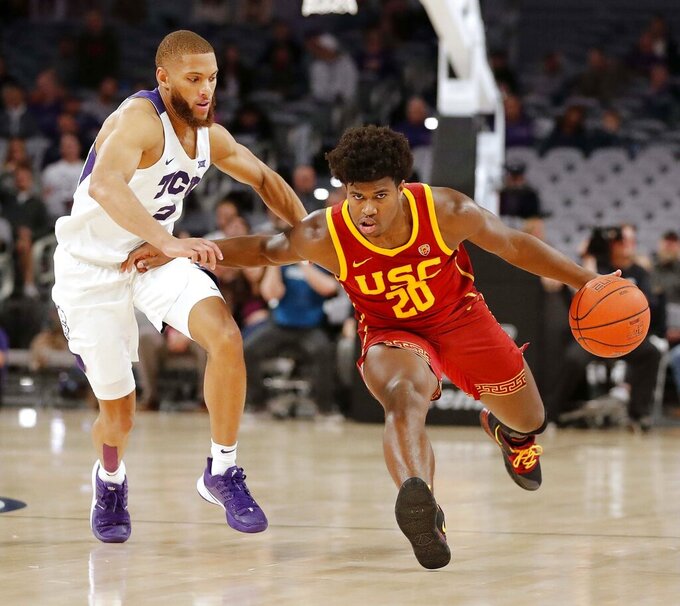 Southern California guard Ethan Anderson (20) is defended by TCU guard Edric Dennis Jr. (2) during the second half of an NCAA college basketball game in Fort Worth, Texas, Friday, Dec. 6, 2019. (Bob Booth/Star-Telegram via AP) 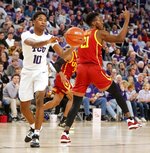 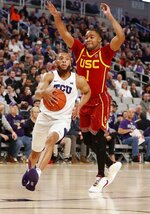 FORT WORTH, Texas (AP) — The ending went pretty much just as planned for Southern Cal, after the Trojans had blown an 18-point lead.

Nick Rakocevic had a tip-in in the final second of Ethan Anderson's missed shot, after the USC senior post had also rebounded a missed free throw at the other end, and the Trojans beat TCU 80-78 on Friday night.

“That was great. Nick, we told him to inbound the ball or rebound it, depending on if he made or missed. We got the rebound,” coach Andy Enfield said. "Ethan got in the lane, made a good move and then Nick did a great job of just going. He's a terrific offensive rebounder and a great player. So he made just a big-time play.”

Rakocevic, who had 12 points and 11 rebounds, got the game-winning tip-in for USC (8-2) with .2 left on the clock. TCU got a timeout, but then had an inbound infraction and never had a chance to get off a desperation shot.

TCU (6-2) tied the game at 78 on Kevin Samuel's strong inside move while being fouled with 8 seconds remaining. But Samuel missed a go-ahead free throw and Rakocevic grabbed the rebound.

It was the first basketball game played at Dickies Arena, which opened earlier this fall about 3 miles from the TCU campus. George Strait played two sold-out concerts in the building two weeks ago.

Jonah Mathews had 20 points with four 3-pointers for USC. Onyeka Okongwu had 13 points and Anderson had 10 points with eight assists.

“Our players played extremely hard. And now we have to go back and take a few days off and they have to focus on their studies,” Enfield said. “It's a great way to go into your final exams."

The Trojans led 52-34 right after halftime when Mathews made a 3-pointer, and never trailed in the second half. They could have sealed the game without a dramatic finish if they hadn't missed four consecutive free throws in the final 44 seconds, three by Okongwu.

“Obviously our first half wasn't good defensively. I couldn't believe how bad we were,” TCU coach Jamie Dixon said. “Give them credit for going and doing what they do, they shot the ball well inside. We started to find it in the second half. That's the positive, we found some heart and determination.”

Dickies Arena seats just under 13,000 for basketball, and is already scheduled to host first- and second-round games during the 2022 NCAA Tournament. Texas and Texas A&M will play there Sunday. The American Athletic Conference tournament is set for the arena this season, and for at least two more years after that.

The Horned Frogs beat USC 81-69 early last season in a game played at Staples Center in Los Angeles, not far from where Dixon grew up and where his parents still live.

USC: The Trojans are in a stretch of playing eight of 10 games away from home, but now go into a break for exams after a win on the road against a Big 12 team. USC has five freshmen, but it was the senior Rakocevic with the big plays at the end.

TCU: The Horned Frogs came into the game leading the Big 12 with 10 made 3-pointers a game, and the last six USC opponents all had at least nine against the Trojans. TCU was only 5-of-19 from long range.

USC are back home Dec. 15 against Long Beach State. The Trojans then play LSU at Staples Center before a Dec. 29 visit from Florida Gulf Coast, which is Enfield's former team.

TCU plays its next five games back on campus. The Horned Frogs play Winthrop on Wednesday, the first of four nonconference games before their Big 12 opener Jan. 4 against Iowa State.