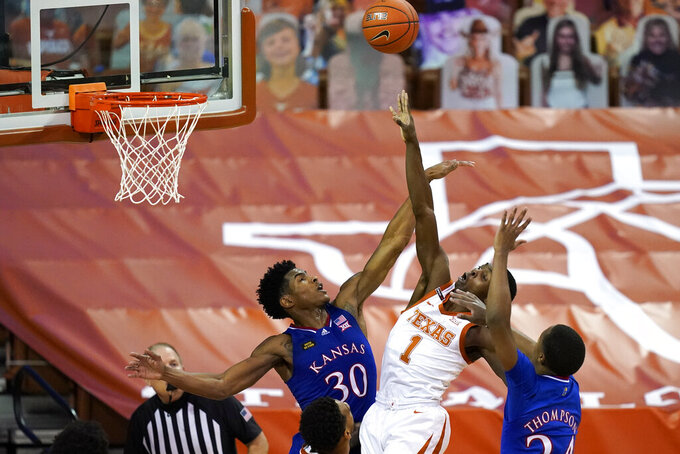 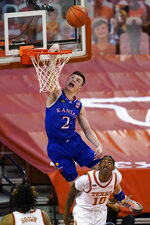 AUSTIN, Texas (AP) — Courtney Ramey scored 15 points and made two free throws with a minute left in overtime to give Texas the lead as the 14th-ranked Longhorns earned a regular-season sweep of No. 17 Kansas with a 75-72 win Tuesday night.

Kansas had a chance to tie after Ramey's free throws, but Jalen Wilson lost the ball driving for a layup. Kai Jones made one free throw for Texas (14-6, 8-5 Big 12) with 5 seconds left for the final margin.

Ochai Ogbajai scored 17 points for Kansas (17-8, 11-6), which had its five-game win streak snapped. The Jayhawks lost to Texas twice in the regular season for the first time since the Big 12 went to round-robin play in 2011-2012. Texas' 25-point win at Kansas on Jan. 2 was the Jayhawks' worst home loss under coach Bill Self.

“They have been the class of the league for a long, long time,” Texas coach Shaka Smart said. “It means a lot to win both games, but who knows, maybe we'll play them again in the conference tournament.”

“To be the first team to sweep Kansas, on senior night ... it means a lot being able to be part of history,” said senior Matt Coleman, who had 11 points, nine rebounds and five assists.

Texas led for most of the final four minutes of regulation before David McCormack’s put-back layup with 6 seconds left sent the game to overtime at 66-66.

Kansas led by 14 points late in the first half and 11 at halftime before Texas rallied. The Jayhawks seized control early with a 19-2 run punctuated by two run-out dunks by Bryce Thompson.

Texas missed its first 12 3-point attempts but turned the game around when the long-range shots started connecting. Freshman Greg Brown made two 3s to start the second half, and a twisting layup by Andrew Jones quickly had the Longhorns back within six.

Christian Braun made a 3-pointer for Kansas to start overtime before Coleman hit a reverse layup and Andrew Jones turned a steal into a transition basket for the lead.

“In the first half we were flying around. We didn’t come out with that energy in the second,” Braun said.

Kansas: The Jayhawks still have the most Big 12 victories and are fighting for second place in the league behind their next opponent, No. 2 Baylor. Self lamented this week that not every Big 12 team will play each other twice, and said there are plenty of teams that would like a late-season shot at the undefeated Bears.

Texas: The Longhorns hit the road for four straight games to end their regular season under the newly revised scheduled released by the Big 12. The Longhorns keep their originally scheduled Saturday matchup at No. 18 Texas Tech, then finish with trips to Iowa State, No. 7 Oklahoma and TCU that were previously postponed.

“We’re going to be on the road and we showed a lot of fight to get this one,” senior Jericho Sims said. “We’re going to remember this when we’re all done with our career.”

Both teams gave little ground on defense in the closing minutes of regulation. The teams combined for just 11 points over the final seven minutes. Texas finished the game shooting 38%. Kansas was at 40%. Just as critical, the Jayhawks were 12 of 21 from the free throw line.

“Holding them to 23 in the second half and six in the overtime, that flat-out won us the game,” Smart said. “I’m really proud for the way our guys came together after Kansas' phenomenal start.”