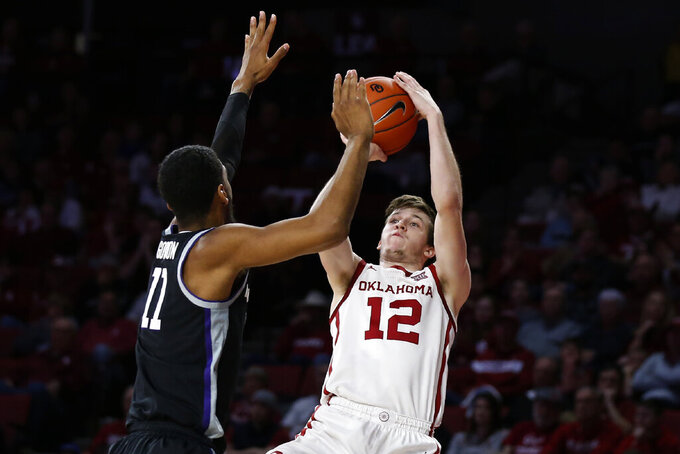 NORMAN, Okla. (AP) — Austin Reaves was running out of time to make an impression in his Big 12 debut.

The Wichita State transfer stepped up at the right time. He scored 18 of his 21 points final 11 minutes, and Oklahoma rallied from 11 down in the second half to beat Kansas State 66-61 on Saturday.

“Everybody wants to do something that helps the team win,” Reaves said. “I look up at the scoreboard and feel like, ‘What could I do to help?’”

His answer was to make 5 of 9 field-goal attempts and 5 of 6 free throws after the break.

Kristian Doolittle added 19 points and 12 rebounds for the Sooners (10-3), who won despite shooting just 37 percent overall and making just 5 of 23 3-pointers.

Xavier Sneed scored 22 points and Cartier Diarra added 10 for Kansas State (7-6) in the conference opener for both teams.

Kansas State led 33-30 at halftime behind 7-for-16 3-point shooting. Sneed scored 10 points before the break.

Doolittle scored 13 in the first half.

“Doo kept us in the game in the first half,” Reaves said. “Otherwise, we would’ve been down 15 at the break.”

Early in the second half, Doolittle kept the ball alive between three players to claim an offensive rebound. He passed to Alondes Williams, who scored, was fouled and made the free throw to cut Kansas State's lead to 35-33.

Oklahoma had closed to within 44-39 but Sneed hit a 3-pointer, was fouled and made the free throw to put the Wildcats back up by nine.

Shortly after that, Reaves became more aggressive. He drew the fourth foul from Sneed with 8:37 to go and Oklahoma rallying. With Sneed out, Reaves drained a 3-pointer to cut Kansas State's lead to 55-54.

Sneed re-entered the game with 2:06 left, but Kansas State coach Bruce Weber opted not to have him defend Reaves to try to protect him from fouling out. Just 27 seconds later, Reaves hit the 3-pointer that put the Sooners ahead for good, 63-61, with 1:39 to play. “We just didn’t want him (Sneed) to foul out," Weber said. "Reaves is tough. He’s got a wiggle. He knows how to make plays and draw fouls."

Reaves was impressed with his teammates for hanging tough when they got behind.

“Have to play every second on the court because it all counts,” Reaves said. “It can change in seconds, so we prepared like that.”

Kansas State: The Wildcats, who had competitive losses to Mississippi State and Saint Louis in nonconference play, missed an opportunity to get a close one on the road.

Oklahoma: A home loss to a team barely over .500 could have been costly for the Sooners. Instead, their defense battled enough to give the offense time to find a rhythm.

“Down in the second half, I was really proud of our guys defensively,” Oklahoma coach Lon Kruger said. “We dug in and made some tough plays. We had some good deflections and forced some turnovers that turned into some pace for us offensively.”

Weber, on defending Reaves: “I thought we had him under control for most of the first half until he got cooking in the last five minutes. He made the plays that gave them the chance.”