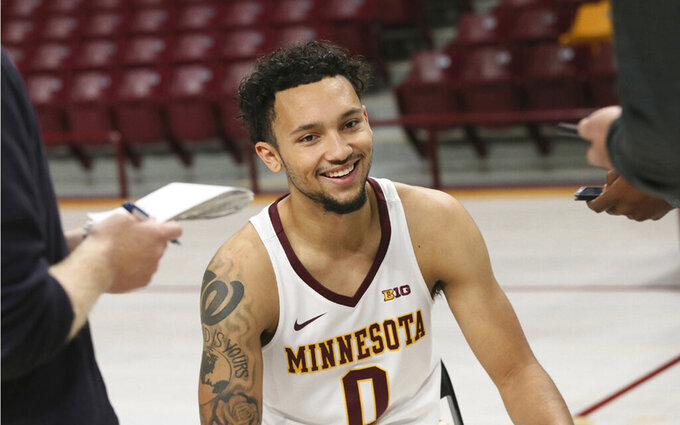 In this Oct. 28, 2019 photo, former Vanderbilt guard Payton Willis talks with reporters during Minnesota's NCAA college basketball media day in Minneapolis. Willis is one of three transfers to Minnesota eligible to play this season as Minnesota must replace its two best players in Jordan Murphy and Amir Coffey. (AP Photo/Jim Mone)

MINNEAPOLIS (AP) — Seven of Minnesota's top 10 players from 2018-19 will be missing this season, leaving the Gophers with much to rebuild from the team that registered the program's first NCAA Tournament victory in six years with a decisive win over Louisville.

Naturally, almost all the prognostications have pegged the Gophers as a bottom-four team in the Big Ten. Their first answer, though, to the questions about how all that lost production will be filled already has been on their roster for a year.

After sitting out last season as transfers, 6-foot-2 point guard Marcus Carr (Pittsburgh) and 6-foot-4 wing man Peyton Willis (Vanderbilt) are more than eager to step into the starting lineup. They're coming with power-conference experience, too.

"I've always been a point guard, so the leadership thing has kind of always been something that I can look to," Carr said. "I've been preparing for it my whole life, so it's not really a burden or anything. I kind of looking forward to it. I like that challenge."

"We've got a lot of new guys, but they're not young," coach Richard Pitino said. "They can't act young."

Though shooting guard Gabe Kalscheur and center Daniel Oturu are only sophomores themselves, they spent their entire freshman year in the starting lineup. Senior Michael Hurt will be counted on to provide energy off the bench, and fellow forward Jarvis Omersa, the team's most athletic player, will see his role increase as a sophomore. Add that all up, and the Gophers have a little more experience to lean on that it might look like on the surface.

The NCAA allows programs to take a foreign trip once every four years, and Pitino decided this summer was the time to do it. The Gophers spent nine days in August in Italy, touring three cities and playing three exhibition games against local teams.

"It wasn't as much about basketball as it was the experience," Willis said, "so I feel like it was great for chemistry."

The Gophers thrived last season on foul shots and paint points, but their perimeter shooting was a weakness. The Gophers ranked 11th in the conference in 3-point shooting (31.7, a major emphasis this fall. Kalscheur is the sharpest returning shooter. The addition of Willis ought to increase their threat behind the line, too. Carr's stated goal is to shoot around 40% from 3-point range, and Kalscheur's aim is about 45%.

"We have a lot of dead-eye, knock-down shooters who can hit it," Kalscheur said, "and that's going to pay off."

There are four true freshmen on the roster: guards Tre' Williams and Bryan Greenlee, forward Isaiah Ihnen and center Sam Freeman. Williams and Ihnen are expected to see the most action initially, with Ihnen's role being raised after the injury to Curry.

The Gophers have gradually increased the difficulty of their nonconference slate over time under Pitino, prompted by guidelines for NCAA Tournament selection that were recently revised. Six of their 10 foes are from the six major conferences, with only DePaul (Nov. 29) and Clemson (Dec. 2) at home.

"We better be ready," Pitino said. "I think there's a sense of urgency to it all."

The first conference home game is on Dec. 15 against Ohio State, which at No. 18 is one of four Big Ten teams ranked in the preseason Associated Press poll. The Gophers must also visit the Buckeyes (Jan. 23) on their 20-game slate, which includes home (Jan. 26) and away (Jan. 9) against top-ranked Michigan State.